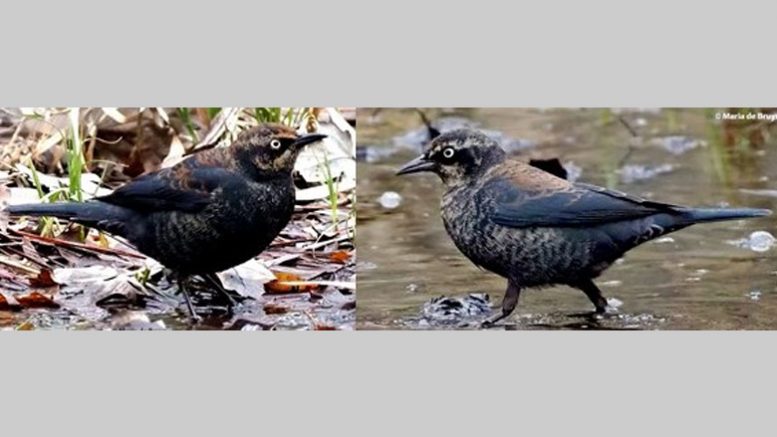 The change of seasons “officially” begins on March 20, and we’re still waiting to see whether the continuing cold rains will make this the wettest winter on record in our area. Nevertheless, the sporadic warm, sunny days we’ve had lately are turning our thoughts to spring. Trees are beginning to bud out, daffodils and crocuses are blooming, and some birds are beginning to display courtship behaviors.

This means that our winter avian migrants are getting ready to head back up north, like the rusty blackbirds seen above. These good-sized birds don’t come to our feeders, but people walking in local parks have been able to see them in pond and wetland areas. They like to search for food by turning over wet leaves to expose tasty bugs.

The finches featured in past columns (evening grosbeaks, red crossbills, pine siskins) and other birds, such as purple finches, white-throated sparrows, dark-eyed juncos and yellow-rumped warblers, will soon be starting their treks back up North. Some of our bird feeders will become a bit less crowded, at least for a time. I will miss the golden-crowned and ruby-crowned kinglets, too. These tiny avians are often cited as the smallest perching birds in North America. Small size does not equate to small spirit, however — they are among the most active and feisty birds. Both species tend to be constantly on the move as they glean insects from leaves, branches, the ground and even midair. The golden-crowned kinglets, which look to me like they have put on eye makeup, will sit still for just a few seconds longer than the ruby-crowned.

At my feeder, the fall/winter resident ruby-crowned does not allow its bigger rivals to keep him away from the suet feeder! One of the kinglets visiting this year has not confined himself to the suet feeder, as was the case in the past. He has also been consuming some of the smaller seeds, something I had not seen his predecessors do. The year-round resident birds are now starting to show their courtship behavior. Red-shouldered hawks are already mating, and I saw a male cardinal feeding a prospective female mate the other day. As the birds get distracted, they might not be as aware as usual — the other day, a sharp-shinned hawk chased a male cardinal into my kitchen window and then killed the stunned bird.

Sometimes you may also hear birds banging into your windows. This could be because they are being chased or because they see their own reflection in the window and want to challenge a perceived rival.

A simple way to prevent at least some bird strikes is to draw vertical lines on your windows with white glass marker pens (about 3-4 inches apart). You will still be able to see out your windows, but the birds will not want to fly through the perceived gaps. This video demonstrates the technique: https://www.youtube.com/watch?v=UC9xQkUtQ98.

Keep an eye out now for birds investigating possible nesting sites — my nest boxes are being inspected by an increasing number of visitors. If there are old nests in boxes that you monitor, you can remove them, place them on the ground nearby and wipe out the nest box in preparation for new families.

Portrait of a White-Eyed Bird

Appreciating and Protecting Trees – A Focus for National Forestry Week

Be the first to comment on "Spring Migration is Coming Soon"