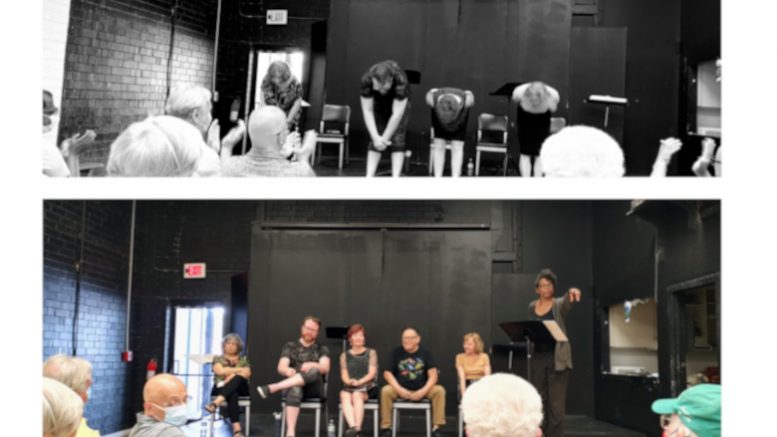 The final performance of “Staged: New Play Readings” at Carrboro’s ArtCenter was on Sunday, June 12. The play in question — The Whirling Dervish — is by Cuban-American playwright Anthony Garcia-Copian from Miami, who has lived in The Triangle since 1995 and owns the Raleigh Tea Company.

The “Staged” series is put on by OdysseyStage to support North Carolina playwrights by performing minimally rehearsed read-throughs of scripts, that are followed up by immediate feedback and participation from the audience. This allows playwrights to receive real-time notes that can be used to modify the play for its full production.

In her introduction to the reading on Sunday, Annie Taft, president of OdysseyStage, described stage readings as the last phase in the development of a play. In this format, the entire play is read out loud by actors but without full theatrical sets, costumes, makeup and stage lighting. The actors haven’t memorized the lines and stage directions are read aloud too, in this case by Taft as the “narrator,” a role which doesn’t exist in the play.

The setting for The Whirling Dervish is a bungalow in a swanky Hollywood hotel where Dina Maneli (read by Christine Rogers), a legendary and infamous washed-up star of stage and screen, is contemplating ending her life.

Enter her superfan Fen (read by Nick Popio), who sneaks into the room, despite the purported high-level security of the establishment. He has to hide moments later as Dina makes her first appearance, belting out, “The Man I Love.”

There are many snippets of classic show tunes in the play, as well as witty and biting humor, especially in the first of three scenes. The songs are all delivered by Dina and the zingers come mostly from Dina herself, or Ronni (read by Lori Mahl) who is the voice of the tabloid press.

Attendees at Sunday’s reading laughed enthusiastically at the witticisms, catching all the references. Ronni shouts out several hyperbolic and gossipy tabloid headlines, while Dina cleverly reinterprets her own missteps in life, career and love with typical exaggeration, denial and an above-it-all sheen as superstars do when speaking publicly about themselves.

In scene one, Fen has to finally emerge from his hiding place in Dina’s bungalow, when her monologue about taking her life gets more and more serious, and she flamboyantly declares her wardrobe dilemma, “You can’t just wear anything when you kill yourself. So stressful!” She prefers Halston.

Fen prevents Dina from swallowing a whole bottle of pills and the dialogue turns to Fen’s life as scene two unfolds. Scenes from stage reading of The Whirling Dervish. In all photos from L to R Annie Taft, Nick Popio, Christine Rogers and Lori Mahl. Photos and collage by Pamir Kiciman.

During the audience feedback at the end of the reading moderated by Yvette Holder, playwright Garcia-Copian was asked what inspired him to write The Whirling Dervish. His answer revealed what everyone was already clearly aware of as the hints piled up: Dina Maneli is a fictionalized version of Liza Minnelli.

“I was in high school, it was the mid-70s and I met Liza Minnelli who was at the Diplomat Hotel in Florida with Desi Arnaz Jr., and others sitting at a table. I gave her a gold ring,” Garcia-Copian revealed.

The ring is used in the play as a bonding device between Fen and Dina. He finds it amongst her Tiffany’s jewelry. Dina remembers Fen giving her the ring and this starts long stretches of conversations in scenes two and three about Fen’s sexual identity, what to do with his life, and how he got to 40-something without making his artistic mark in show business.

The play turns serious in these parts. Zingers are less frequent. In an email, Garcia-Copian said Dina is Fen’s, “Glamour Guru.” She takes an interest in him and he reveals all of his insecurities. They take pills together.

“Let’s meditate and medicate,” Dina says to Fen at one point during the play. Dina explains why her pills are “supplements,” that keep her going while she’s “here” and reality is “over there.”

Fen gets all the advice he could ever need even if it’s slightly unhinged and jaded, but with a thoroughly lived-it-all sincerity from Dina.

It’s genuine, it’s her distilled wisdom from experience. The mood is lightened by a few funny well-placed lines, such as when Dina intones, “Darling may I offer some brutal honesty? I haven’t had sex in years so if a man becomes inappropriate on this — then God bless him.”

Fen responds with incredulity, “How can gay men not love you? You practically are a gay man from the 1970’s. You’re flamboyant. Dramatic. You love Tiffany’s and you’re brutally honest. Your emotions are a bonfire.”

The stage reading of The Whirling Dervish was directed by Danielle Fenton.

“We had auditions over Zoom,” Fenton said.

Cold readings are common in the audition process, where actors are asked to read from the text with very little preparation.

“I did ask the actors to read some parts in a variety of ways to see if they can take direction,” Fenton added. “We had three rehearsals and I worked with Christine Rogers (voicing Dina Maneli) for a day.”

The consensus of the audience at the conclusion was that they would like to see the The Whirling Dervish fully produced. Everyone enjoyed the snappy dialogue, the script overall and the historical and laugh-out-loud funny references to real entertainment stars.

Annie Taft praised Garcia-Copian for his use of lyrical language and being able to convey, “humor in the midst of pathos.”

Christine Rogers in the role of Dani Maneli said that as an actor stage readings are liberating in comparison to a fully produced play, because there are no lines to memorize.

“But it’s a full performance,” Rogers explained. “You’re delivering a fully developed character and taking the audience on a journey. It has to be authentic.”

Garcia-Copian explained over email that he chose the title for his play while watching Liza Minnelli in concert at New York City’s Winter Garden Theatre.

Next up for OdysseyStage is the NC 10×10 Play Festival in September, which is ten plays of ten minutes each, selected from North Carolina playwrights featuring local actors.