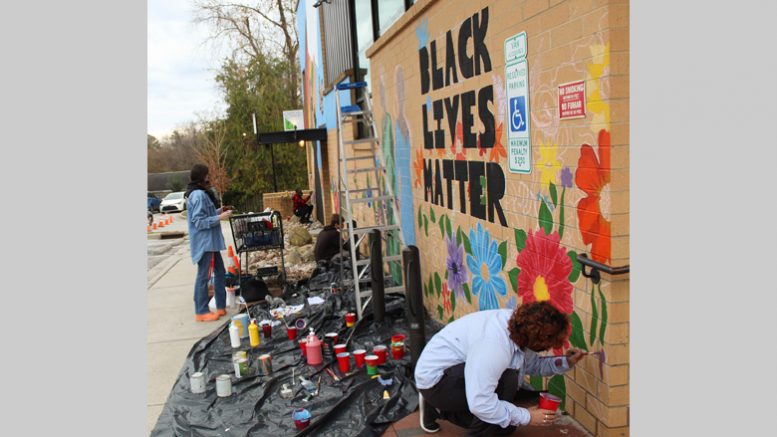 A team of student artists led by Tyrone Small work on the Black Lives Matter mural at CommunityWorx in Carrboro.

While most students in the community have been attending remote classes and socially distancing from their peers, four local teens have spent some of December together, in-person. They have been creating art for the Town of Carrboro.

Alongside established artist Tyrone Small, the team has bonded quickly while painting a Black Lives Matter mural on the side of the CommunityWorx Thrift Shop. Selected by the Carrboro Town Council from a pool of 17 applicants, the four students, along with Small, expect to complete the mural by Dec. 20. Work on the approximately $5,000 project has been taking place on afternoons and weekends, and all the artists wear masks during work time. The cost of the project is used to compensate the artists and purchase supplies.

The commission of the mural “is part of a comprehensive examination of racial equality, and the town really showing its expression of support for Black Lives Matter,” said Carrboro Communications Manager Catherine Lazorko.

A.L. Stanback middle schooler Cyani Jacobs designed the left portion of the mural, which depicts a person with a sign that will say “Don’t shoot,” paired with pro-LGBTQ+ imagery. Jacobs became involved with the project after her art teacher saw requests for student artists in the news and recommended she apply. Jacobs has painted backgrounds and settings for her school’s plays, and she said her design was inspired by societal disagreements about BLM and LGBTQ+ rights. “It’s very ecstatic for me, especially that people coming from work or whatever get to see this as soon as they turn a corner,” Jacobs said. “And it’s our work that we created, and it’s very awesome that people get a huge message from this small but gigantic mural.”

The other three student artists attend Durham Academy and they designed the right side of the mural, which includes two figures, flowers and the sky, as a team, said Ash Granda.

“We wanted to have obviously color and life, and we wanted to figure out a way to represent all kinds of other people, which is pretty difficult without explicitly having stuff,” Granda said. “So, we decided a flower for each kind of type individual there could be.”

Granda, a high school sophomore, wants to study art in college, and he thinks this experience will help him achieve that goal. He already has experience painting murals, including one on the wall in his school’s art room, but he said it was not as big as the CommunityWorx BLM mural.

His friend Carina Rockart is also an experienced artist, having painted the senior bench at Durham Academy, similar to those standing in front of fraternity houses. Art has been a main hobby for Rockart since middle school, and this year gave her more time to paint and create graphic art. She said the mural hasn’t been a stressful commitment since she lives close to CommunityWorx and can arrive quickly on days when she has virtual classes.

BLM, Rockart said, feels like something that should not be controversial. “As we’re starting to actually do it, I feel like more people have seen it as this big statement, which honestly in this year, it doesn’t really feel like that,” she said. “It just feels like something that it should be a fact and everyone should agree with. I don’t know, I guess a lot of it was just I was like, ‘That’s a good message, makes sense, and it’s definitely something that’s very pertinent right now.’”

The supportive dynamic within the entire mural team became most apparent when I spoke to Theo Preston about why he became involved. Theo Preston, a student at Durham Academy, mixes paint while coloring a flower on the right side of the CommunityWorx Black Lives Matter mural.

“It’s kind of been the quintessential, ‘Oh he’s the art kid,’” Preston said. “It’s essentially my one talent.” His friends immediately exclaimed that this wasn’t true.

“He can act! He can build things!” Rockart said.

When I remarked on the similarities among the three high school students, Preston responded, “Just think of us like one three-headed beast,” and then backtracked slightly. “Please don’t. That’s not our team name,” he said. “Our team name is ‘Team Theo.’”

Small contributes a great deal to creating that supportive environment among the artists, according to Preston.

“He’s just all-around a great guy. He just has this energy, which is just so much fun to kind of be around, and it really gets you excited about the project,” Preston said.  “He’s kind of like a supervising force and sort of like an all-around dad.”

For Small, the project — and the town’s endorsement of BLM — is “awesome.”

“Outsiders like myself, coming from Myrtle Beach, South Carolina, coming to Carrboro, I never even heard of Carrboro,” he said. “So just to see that Carrboro’s involved with things like this, if I didn’t know about them, I would want to know about them after that.”

Small said the decision to paint the mural in Carrboro, a town he describes as full of kind people, was a “no-brainer.”

“At this time that we’re going through right now, I feel like everybody wants a voice,” Small said. “And then me as an artist, the student artists, our job as we see it is just to try to create for people, people that don’t know how to talk for themselves, that wish they had a voice, looking at something like this kind of speaks for themselves.”

The Music Man and the Town that Let Him Down

Be the first to comment on "Supporting Black Lives Matter, Supporting Each Other"