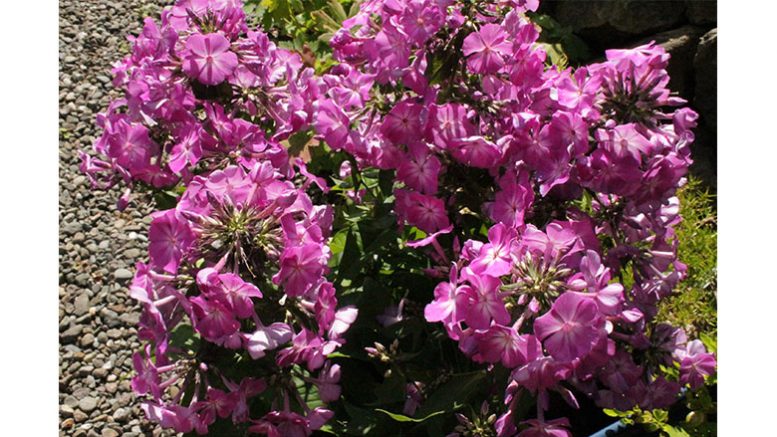 In 1992 when I moved to the Triangle, knowing little about gardening, I quickly picked up on the fact that the color magenta in the garden was verboten. If I were to avoid this color, it was obvious that I had to find out exactly what color the dreaded magenta actually was.

According to the Oxford Dictionary of English, magenta is a “light mauvish-crimson which is one of the primary subtractive colours, complementary to green.” This description didn’t help as I had no idea what a “subtractive colour” was. And since the color green predominates in our gardens, isn’t a complementary color a good thing?

It turns out that many old-time garden writers had an antipathy to the color in the same way I dislike the color orange. Aversions are curious things: They have no rhyme or reason. They just are.

Elizabeth Lawrence, the doyenne of Southern gardeners, disliked magenta: “And one thing more – be firm about pulling up all magenta phlox. Do it at once, as soon as you see a magenta flower. Don’t wait until fall; you will forget it in the fall. The magenta is the strongest growing kind and will soon be all over the garden and will cover up all of your choice plants. Don’t allow it to stay because nothing else is in bloom or because it will grow when more attractive things won’t. Pull it right up and pull up every particle of the root. If you leave a single snip in the ground, it will be back before you know it.” [A Garden of One’s Own].

If this isn’t a description of a weed, I don’t what is. Not only did Lawrence dislike the color but, in her eyes, magenta-colored plants were weeds. Do these plants spread like wildfire because they are magenta colored? Clearly, I was confused.

A garden writer that I greatly admire, Allen Lacy, also seems to have had it in for magenta as he states in The Gardener’s Eye and Other Essays: “The reference books agree that it is a dangerous thing to allow named varieties of Phlox paniculata to seed themselves….The seedlings will be magenta, for one thing, and magenta is a color fit only for loathing. These illegitimate children, moreover, will be very vigorous and utterly lacking in filial piety. Within no time at all, they will shove aside their more polite and highly bred parents. The garden where they are permitted to grow will scream with magenta, revealing in the act the ignorance of the people who tend the plot.” By now I felt intimidated. If Allen Lacy, by all accounts a lovely man, disapproved of magenta, who was I, a novice gardener, to dispute him?

There was hope for the color magenta when in 1997 I came across a quote by Wayne Winterrowd in Horticulture: “Once shunned, the vibrant hue of magenta is making a spectacular comeback in the garden.” Hallelujah! Now I no longer felt the need to be stylish and with it. I could relax in my search for that garden scourge, magenta.

I slowly began to understand what had happened to magenta. As I have already stated, I dislike the color orange so I emphasize blue-tone colors instead whereas Gertrude Jekyll (famous for her magenta disdain) and Elizabeth Lawrence probably used orange in their gardens – so, of course, they disliked magenta.

Times, in reference to magenta, are changing. Just yesterday Brent and Becky’s Blubs sent out an email with this headline: “Striking Magenta Blooms in This Cornflower.”

Fortunately, we have turned a corner on the use of colors in the garden. What suits you might not agree with me – and that’s OK. It’s your garden just as it is my garden. There is one rule I do follow, however, when it comes to color: Choose either magenta-colored or orange-colored plants. You cannot have both.

As a postscript I have to add this: I have a lot of Phlox paniculata (‘David’, ‘John Fanick’, and the magenta-colored ‘Robert Poore’) in my garden and have never had any problem with seeding. I wonder to which varieties Elizabeth Lawrence was referring.

Be the first to comment on "Taking on Magenta"