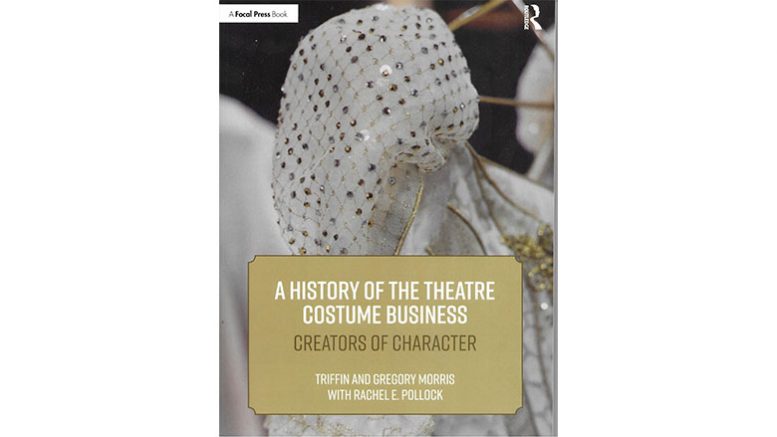 This is the story of a journalist and a theater costume maker who fell in love and created a never-before-told history of the costume-making business — the just released, A History of the Theatre Costume Business: Creators of Character.

The tale that Chapel Hill couple Gregory and Triffin Morris wrote, along with their University of North Carolina-Chapel Hill colleague Rachel Pollock, includes reminisces of major Broadway stars and costume designers, but focuses primarily on the ‘makers,’ who engineer, stitch and sew a designer’s vision to life [Note: Gregory Morris is a regular contributor to The Local Reporter]. A common mistake is thinking that the designers are the ones who actually make the costumes.

“What is it — something like 8 million people go to Broadway shows each year,” Gregory said. “That’s 16 million eyeballs looking at these costumes and they have no idea how they got there.”

The skilled artisans who make the costumes are masters of their materials. The book, which also traces the history of the costume-making business, reveals tricks of the trade — ingenious inventions that inspire an actor to dance more freely or enable a quick change between scenes or how secret pockets are stitched into the costume to hide props.

Gregory, a journalist and second-generation New Yorker, grew up loving the theater in the quintessential theater town. Triffin arrived in New York from the Midwest after earning her Master of Fine Arts degree in Costume Technology from the University of Wisconsin-Milwaukee. She worked her way up to become affiliated with the big-name shops making costumes for major Broadway shows. The two met swing dancing and quickly realized their mutual interests.

“We started dating and I thought what she did was fascinating,” said Gregory. “The combination of theater and history and New York and a chance to do something collaboratively with this girl I was dating [was enticing to him as a journalist]. I wrote an article about [the industry].”

In researching and writing that article, Gregory realized there was no comprehensive history of theater costume making. Those in the business, like Triffin, only knew snippets of stories and rumors about famous costume makers and some sketchy details about how the business had evolved over time.

Being curious and “unstoppable,” as Triffin describes him, Gregory sought out and received a grant from the U.S. Institute for Theater Technology (USITT) to delve further into the topic. With this funding in hand, Triffin was able to begin scouring old newspaper articles and the incorporation papers for some of the old costume making businesses in New York. This digging uncovered some “fascinating” information and confirmed for both her and Gregory the wealth of stories that had never been documented or told before.

“My sense is that the researching of this book can’t be separated from their relationship,” said Pollock, co-author and UNC Lecturer in Costume Production and Costume Crafts Artisan. A Plan, a Publisher and a Pandemic

Over the course of a decade, Gregory and Triffin married, had a child and moved to Chapel Hill where Triffin accepted the position as Head of Costume Production and Costume Director for Playmakers Repertory Company at UNC. In fits and starts between their regular jobs, they continued their research for the book, traveling to Great Britain, Minneapolis and California to do interviews over the years. They secured a publisher, but the COVID-19 pandemic put an abrupt halt to their travels for research.

The couple interviewed designers, actors including Joel Grey and Bernadette Peters and several of the legends of costume making, giving them primary source material to fill the pages with entertaining anecdotes and even some insider scuttlebutt.

Actor Matthew Broderick chatted with the Morrises over coffee.

“Almost always the costume is the most important part of a character. We all talk about the character in rehearsal, and we think about our characters, but you haven’t really decided, yet. Once you have on the clothes, that is when you finally know who the character is and what he thinks,” he told them.

A costume doesn’t only serve as inspiration, it also must be durable enough to survive eight shows a week for two years for a typical Broadway show. That means a garment — often a unique work-of-art boasting fine craftsmanship — that also can endure repeated washings.

Triffin had rubbed elbows with some of the stars they interviewed and speaks their language, creating a comfortable environment for the interviewees and some interesting revelations.

Tony Award-winning actor Nathan Lane, for instance, revealed his unease when being fitted for a costume.

“I don’t know if I really want to talk about fittings,” he told the couple. “It’s like trying to recall an awkward first date. Fittings for an actor are when you are at your most vulnerable. You stand there in your underwear feeling embarrassed. I sort of dread them. You’re trying to think about character motivation and why he dresses the way he does and be open and collaborative with some great designer but all the while regretting the pizza you ate the night before.”

Or the story actor James Monroe Iglehart shared about the magnets sewn in his Aladdin costume to aid in a quick change. “They were powerful magnets, and none of us thought about the lockers in the hallway. I was in the hall leaning against the wall, and suddenly I hear: click, click, click-click-click…There were so many magnets and they had to pull me off the lockers without pulling the costume off me.

The Morrises also were fortunate to interview industry legend Ray Diffen before he passed away. Diffen was a pivotal figure in the evolution of the costume-making business who influenced many future makers.

“Once we had done these interviews, we couldn’t just let this sit on the tape recorder or in my notepad. We felt a moral obligation,” Gregory said. “We’re speaking for the people who can’t tell their stories anymore.”

With a publication date set, the pandemic put a stop to the additional research the couple had intended to do. To make the deadline, they called on Pollock, who has writing as well as costume making experience, to help write several of the chapters using their research.

Theater has been part of human history at least as far back as the ancient Greeks and costumes have been an integral part of that art, Triffin said.

“There is a visceral human need to tell our story,” she said. “There are always costumes. There might not be lights, but there are costumes.”

Gregory added: “The costumes are the only way the audience knows who’s who. It’s so obvious, but I never realized it until an actor told me that.”

Today theater is a huge industry — pandemic notwithstanding — and costume making is a big part of that. Consider this fact from the book:

“The approximately 2,000 costumes for Wicked cost about $2.5 million to make originally. That is more than the scenery, which is a quite spectacular cost. The dress for Elphaba, the “bad witch,” alone took 40 yards of fabric. All in, it cost about $16 million to stage Wicked from concept to opening night curtain. Costumes represented almost 16% of the cost.”

While the book is a history of the costume-making business and some of its legends, it also sheds light on broader themes of women’s history, in business and as entrepreneurs.

Pollock’s chapters on the early costume makers offer glimpses into the lives of amazing women, many of whom came to this country in the early 20th century fleeing unrest in Eastern Europe.

“I feel like these are previously untold or forgotten or neglected stories,” Pollock said. “In writing this book all of these snippets of stories and legends became fleshed out. It connected the dots.”

Triffin sees the book as part of her broader goal of raising awareness of the industry and changing it.

“Traditionally, costuming has been selling women’s work. Grandma knows how to do that and we don’t pay grandma anything so why should we pay you,” Triffin said. “It’s time for us to stand up and be properly represented and for people to understand that what we do is just as complicated as making sets and just as interesting.”

The just over 200-page volume is the “first word” on the topic, the Morrises and Pollock said, and they hope other academics or those in the industry further their inquiry and document the many stories and unsung legends who worked behind the scenes to make productions come alive.

Or as Ray Diffen said of the industry — and perhaps by extension this book:

“At last we could celebrate the existence of craftsmen who make designers look good! For every dress, wig, coat, handbag, shoe, helmet, hat, necklace, bra, pair of tights, corset, camisole, petticoat, hoop skirt, farthingale, suit of chain mail, pumpkin breeches, ruff, etc. etc.—all have to be made. And in our world, that means mostly by hand—making one’s own patterns, finding appropriate materials and inventing methods and, if necessary, making these garments and properties of mystical fabrics and in mysterious ways to beguile the theatre-goer and make him wonder how it was done.”

1 Comment on "Tales of Love, Theater and Costume-Making History"