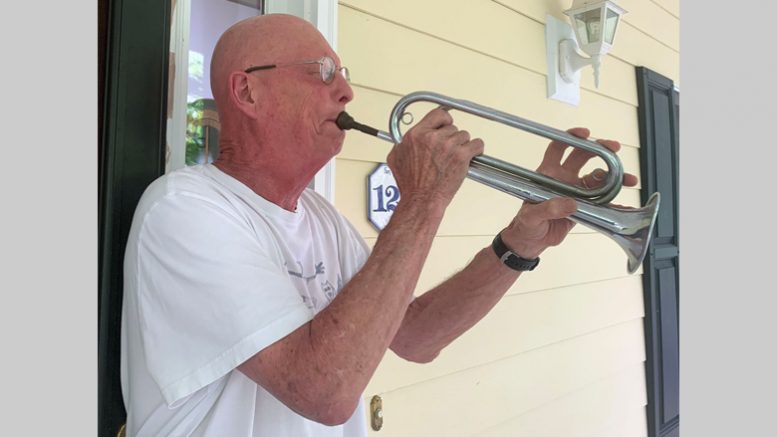 On Memorial Day, tens of thousands of buglers across the land stood out on balconies, porches and backyards and played “Taps” at precisely 3 p.m. — the brainchild of CBS “On the Road” host and Charles Kuralt protégé Steve Hartman.

When I first heard of the project, “Taps Across America,” three days prior to Memorial Day, I knew I had to join: buglers and trumpet players, apart yet together, simultaneously playing Taps in honor of fallen soldiers and present-day COVID-19 heroes.

Off the dusty shelf came down my Chapel Hill Troop 39 Boy Scout silver bugle, which had not been raised to my flabby lips since 1961. Undeterred, this old scout sequestered himself in a back corner of the garage where no one could hear the feeble attempts.

For three days I practiced Taps, but try as I might, that high note eluded my best efforts.

As it turns out, Taps is deceptive: just 24 notes and four tones. What should be simple turns out to be daunting — as any experienced bugler will tell you. Flub that one single high note, the B-flat, and you’ve blown it.

The solution came to me in a burst of insight. This isn’t about you, said an inner voice. This is about them.

That’s when I remembered my former high school classmate and next-door neighbor Joel “Joey” Leigh, Chapel Hill High School class of ‘63, who went off to Vietnam and died in action at only 23.

Standing on our front porch, nervous as if I were debuting at Carnegie Hall, I thought about Spc4 Joel Miller Leigh, infantryman with C Company, 1st Battalion, U.S. Army, lost in Quang Ngai, Dec. 9, 1968.

And I played Taps.

Did I hit that high note? Let’s just say it was the sort of taps that Linus and Charlie Brown would have liked — not so beautiful, but very, very sincere.

[For the origin and history of Taps, go to https://www.west-point.org/taps/Taps.html

To see coverage of Taps Across America, go to https://www.cbsnews.com/news/tens-of-thousands-participate-in-taps-across-america-memorial-day-2020/]

Figuring Out a New Transit Plan

Be the first to comment on "Taps for Joey"