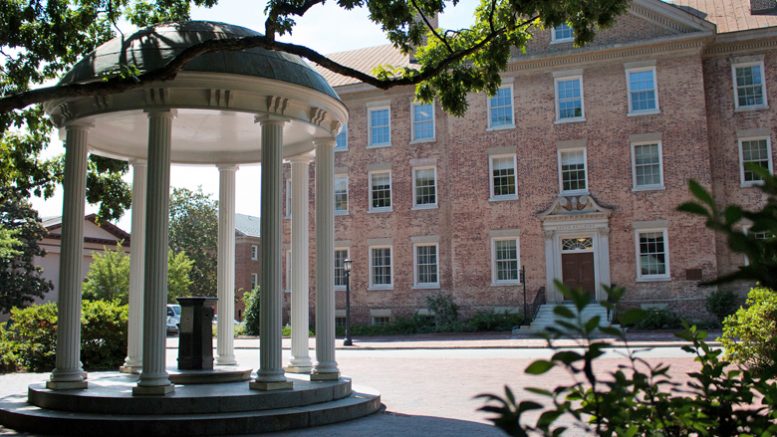 With many local college students now confined to their homes, UNC-Chapel Hill professors are facing a daunting challenge this semester. Here’s how they’ve been able to “zoom” through the coronavirus crisis.

Tom Linden, a professor of environmental and science journalism, remembers being concerned when he heard on March 9 that all Carolina classes would be transferred to an online format after spring break.

The university chancellor’s office sent out an email to the student body on March 12 announcing a one-week extension of spring break to give professors time to prepare for online instruction. Many professors opted to give online lectures live via a program called Zoom, similar to Skype or FaceTime, but available for multiple users.

Linden said he had used Zoom in the past mostly for one-on-one conversations, and was nervous about using it to address an entire class at once.

“I felt responsibility to the class to be competent in my zooming, so to speak,” Linden said.

Despite initial concerns, he said he was pleased with the way his first Zoom-led class turned out. “I felt a big sense of relief,” Linden said. “It continued for an hour and fifteen minutes without any problem.”

Jonathon Jones, a professor of media law, initially thought he was going to teach his class via live Zoom lectures like Linden. After speaking with a friend who teaches at another university, Jones decided to pre-record his lectures.

“I just made the assumption that everyone would have adequate internet access,” Jones said. Then “I realized that I needed to think about it differently, and that’s when I decided to flip the classroom, do the pre-recorded videos, and find other ways to use the class time.”

Jones now sends his students several pre-recorded lectures and an online quiz each week, and holds brief Zoom meetings to allow his students to ask questions.

Experiences teaching classes without in-person instruction vary widely among professors. While a tech-savvy professor comfortable with Zoom might make a fairly seamless transition to online instruction, a chemistry or biology professor whose class has lab components might simply have to suspend part of the class.

Even professors who were able to adapt quickly to online teaching aren’t necessarily happy about the transition. Eric Ferkenhoff, who teaches various writing and reporting classes, said that though teaching his classes via Zoom hasn’t required many changes to his lesson plans, he would rather teach them in person.

Linden said he nevertheless felt he was able to foster a productive discussion. However, he also said he felt this would not have been the case if his class had been online from the start of the semester.

Linden said even though students may be expected to continue their studies as usual, he recognizes that this could be an exceptionally difficult time to study.

“My hat goes off to anybody that’s been able to maintain a high level of focus and direction during this time,” Linden said. “It’s been very disorienting for me, and I assume for everybody, because of the huge disruptions that are occurring, not only in my own life, but worldwide.”

The House at Gatewood