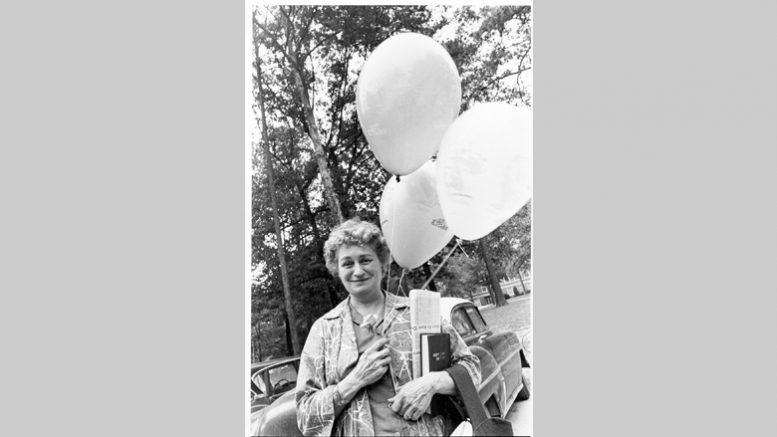 Welcome to “Through a Townie’s Lens,” a photo-blog for in honor of all things local that might find themselves in front of my camera.

A true townie I am, too, having moved to Chapel Hill in 1947 when I was 2, bringing along my older brother and my mother. So, while I wasn’t actually born in Chapel Hill, I can claim to be a native — albeit with an asterisk.

And it being Mother’s Day week, what better place to start than with me mum?

They called her “the Balloon Lady,” a moniker she liked — carrying the colorful things around no matter what, her way of saying to the world which had dealt her such a raw hand: Hey, isn’t life just too much?

These are yellow, pale red and blue, as I remember taking the photograph in the old parking lot behind UNC’s Wilson Library, now occupied by the science complex. That’s Dey Hall in the background.

Mom’s hands are large and thickly veined. On her right hand there’s the little Navajo ring I brought back from New Mexico. On her wedding ring finger is the little opal ring she would later give my wife when the cancer hurt too much. The smock, as she called it, is an emerald green and turquoise, and the rose is pink.

Would that I had given it to her.

What is the occasion? It should be Mother’s Day. For Myra Lauterer adopted so many college boys who worked at the library where she served for 20 years, that I felt like I had a slew of half-brothers.

She’s also holding a book titled “Pay Now, Die Later.” I made this photograph five months to the day before her death. She was only 51. Just a kid. I treasure this photograph because she is giving me that mom-look. You know, the one that says, ‘You’re all right, kiddo.’

As a Daily Tar Heel photographer and a soon-to-be launched journalism grad, I had finally found my calling, subtly steered no doubt, by the Balloon Lady.

4 Comments on "The Balloon Lady: She Was Me Mum"