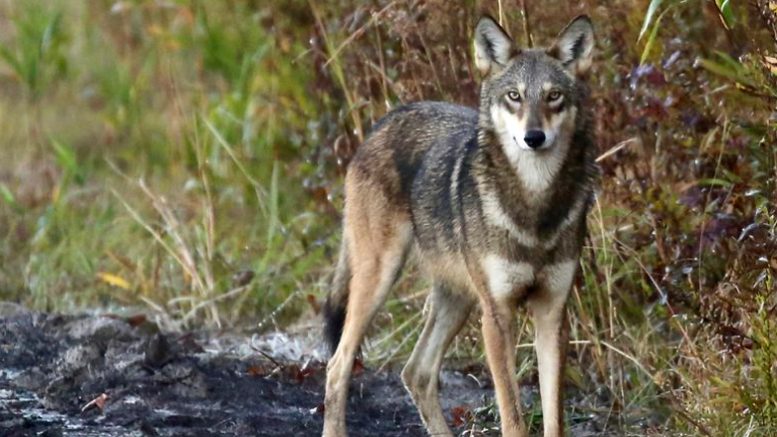 Our native southern wolf was declared endangered in 1967. By 1980, it was declared extinct in the wild, and the last survivors were gathered up in Louisiana and Texas and put into a captive breeding program, with hopes of re-introduction into the wild.

The Alligator River National Wildlife Refuge in eastern North Carolina was the chosen location for a re-introduction in 1987. By spring of 1988, the first red wolf pups were present on the refuge. From the original 14 wolves released in 1987, the population reached its high point in 2006 with an estimated 130 individuals living in five North Carolina counties.

Some landowners weren’t pleased. By accident or with intent, about 14 wolves die every year from gunshot wounds. The U.S. Fish and Wildlife Service is the agency charged with protecting endangered species, but the agency has failed the red wolf. Disgruntled landowners were issued permits to shoot red wolves by this very agency.

The Southern Environmental Law Center sued the USFWS, and got a temporary injunction against the issuance of permits, but our Federal agency had more to say. In recent filings, the USFWS has tried to limit the protected range of the red wolf to include only the ARNWR and a nearby bombing range, stating that any of the wolves that left this small area were a “non-essential experimental population.”

Hard to imagine that any individual is non-essential, when the most recent figures show a population of just 25 red wolves left in the wild, but that was their claim.

In addition to limiting the range of the red wolf, another political roadblock was added to the mix. A Congressional appropriations committee also directed the USFWS to determine if the red wolf was an actual distinct species. After all, if it’s not a true endangered species, then it loses all the federal protections that were already being woefully ignored and undermined.  All this backpedaling occurred while some vocal local landowners were pushing against the presence of wolves in North Carolina.

In March, the National Academies of Science declared the red wolf was a distinct species of wolf. It is not a subspecies of coyote or gray wolf. DNA evidence along with measurements of muzzle width and hind foot length were used to make the taxonomic determination. Under the law, the Red Wolf deserves every protection it has been so egregiously denied.

In November 2017, I was making one of my usual visits to the ARNWR. For years I have gone to this refuge, always with the hope of seeing a red wolf in the wild. I might see 15 bears on any given trip, but never had I crossed paths with the elusive red wolf. Late in the afternoon, I parked near a muddy path to check the ground for tracks. The heavy fall rains of that season left plenty of muddy areas on multiple trails. At one trail corner, I found dozens of canid tracks crisscrossing the road. It looked promising.

I parked my car well back from the corner, put the windows up (hoping to disguise my scent) and waited. Within an hour, I saw movement from behind the tall reeds at trail’s edge. The sun was low and golden in the sky. Out from the woods, a canid of some type emerged.

Was it a coyote? I lifted the camera, and spotted the distinct collar of a red wolf. I was both thrilled and saddened. The wolf was a male. He looked up towards the setting sun, and lingered in the warmth of the path. He was so old and frail.

I thought how could this poor animal survive even one more season? I didn’t discount him for his age; I was more given to a bit of despair, imagining that the only red wolves left on the refuge were the old warriors who had managed to elude the hunters. I took plenty of photos and watched the old male slowly return to the forest.

Sunrise the following morning brought me back to the muddy tracks. Windows up, I waited once more. At 8 a.m. I saw a canid trotting confidently along the trail. She was not the red wolf I had seen the evening before. This animal was young and well-muscled. The morning sun enhanced her copper-hued coat.

She was trotting directly towards me. I opened the window and began firing off shots. No collar, but she was carrying something. Was it prey from a hunting expedition? I couldn’t make out the object in her mouth.

When she saw me, she gave little notice, but veered off the path into the dense woods. I remained in the car, and wondered if I would see her again. Something told me she wanted to see more of me, nothing companionable about this behavior, just the nature of any dog or coyote to be inquisitive.

Suddenly she was before me, stock still, staring at me across the road. I made no move beyond pushing the shutter release. She remained in place for perhaps 10 seconds, and then returned to the pocosin. My encounter was over for the morning.

I got out of the car to examine all the wolf prints, and there I found her treasure. She had left behind the object she had been carrying. Nothing more than an orange strip of hardened vinyl, some bit of flotsam that had piqued her interest … a toy.

The evening following our encounter, I saw her yet again. This time back on the path she had taken that morning, but travelling in the opposite direction, out on her evening hunt. She was in perfect health, glossy, clear-eyed and at home in the wilds of her native range. She has a chance, if she can elude the politicians, and the guns.

Mary Parker Sonis is a naturalist, photographer and writer who lives in Carrboro.

Your Guide to Early Voting in Orange County

Be the first to comment on "The Beleaguered Red Wolf"