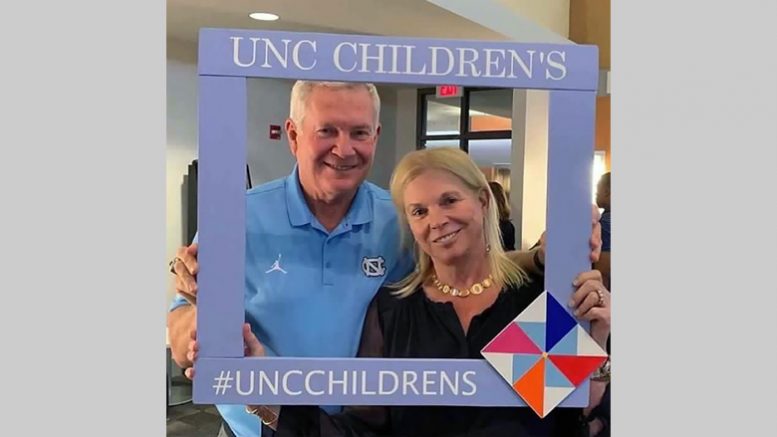 Mack & Sally Brown are Happy to be Back in Chapel Hill

Birthdate: Aug. 27, 1951
Hometown: Cookeville, Tenn.
August 27th Zodiac:
As a Virgo born on August 27th, you are characterized by your intelligence, generosity and discipline. You have outstanding social skills and seem to understand people with ease. You use your understanding to help others, often realizing they need assistance before they do.

Mack Brown, whose charismatic style and disciplined approach led the University of North Carolina into the Top Five, and the University of Texas to the 2005 BCS National Championship, began his second stint as head coach in Chapel Hill on Nov. 27, 2018. His goal in returning, almost exactly twelve months ago now, was to lead another resurgence of Carolina football. You are characterized by your intelligence, generosity and discipline.

What a difference a year makes. After a 41-10 win over rival N.C. State, sparked by freshman Sam Howell’s career-best 401 yards passing, Brown has North Carolina headed to the Military Bowl on December 27th.

August 27th, November 27th, December 27th. It’s hard to say exactly what we can take from this, other than that good things happen on the 27th.

We can say that Brown knows how to win. But it’s really about how he’s won that’s made all the difference. His return has brought a sense of fun, camaraderie, and smiles to a program that has missed them. You have outstanding social skills and seem to understand people with ease. Mack Brown has had a storied and storybook career. A 42-year veteran of collegiate coaching, Brown has served as a head coach for 31 seasons with stops at Texas (1998-2013), North Carolina (1988-97), Tulane (1985-87), and Appalachian State (1983). He’s one of a handful of coaches in college football history to lead two separate programs to Top Five national finishes, and the eighth Tar Heel in the National Football Foundation College Football Hall of Fame.

When Brown first came to Chapel Hill in 1988, he took over a North Carolina program that had suffered two losing seasons in its previous three years and three non-winning seasons in its previous four. That time it took him three years to take Carolina to a Bowl game. This time, one. He’s just getting better, which is good news for the Tar Heel Nation. Brown is one of the most respected coaches in the game, on and off the field. Brown and his wife, Sally, have been long-time partners with and supporters of the UNC Children’s Hospital. Mack and Sally understand the importance and the need for funding for children’s causes, including research and clinical care. When they came to UNC the first time, over thirty years ago now, they encouraged the players to give back to their community, and it’s a tradition that has continued.

Each Friday before home games, Brown’s players make their way to the hospital and talk with the kids, their families, and the health care staff. It’s a sweet and gentle gesture that can create lifelong memories for everybody. As Mack has said, his player’s commitment is a 40-year decision, not a 4-year decision, because choosing to come to North Carolina will benefit you long after you leave campus. The hope is that his players will continue to want to give back to their school, their community, or the needs of others they are most passionate about, just as Mack and Sally have done for years. You use your understanding to help others, often realizing they need assistance before they do. Brown was born in Cookeville, Tennessee, and attended Florida State University, where he graduated in 1974. He and his wife, Sally, have four children — Matt, Katherine, Barbara and Chris — and six grandchildren — Tyler, Mack, Bailey, Caroline, Janie, and Truett.

Sally is the past president of the Public, Private Partnership (PPP), an organization that fosters improved relations between the University of North Carolina and the town of Chapel Hill. She has also volunteered time to chair the fundraising efforts for the UNC Black Cultural Center and was a member of a Carolina Alumni Advisory Committee.

On and off the field, Sally and Mack understand the big picture, which is that none of us can get through life’s challenges on our own; we are all in this together. Children need our help more than anyone; the stronger they are, the stronger we are. It’s this philosophy that makes winners of us all.

Through hard work, discipline and Carolina spirit, Mack Brown’s return to UNC has created excitement, encouraged hope, and celebrated fun. And the power of fun is sometimes underrated.

Virgo. Characterized by your intelligence, generosity and discipline, outstanding social skills and understanding people with ease. You can’t coach a football team or live your life via the zodiac, but in Mack’s case the stars don’t lie.

NAACP Builds a Bridge to Learning

Why can’t we solve our homeless problem?