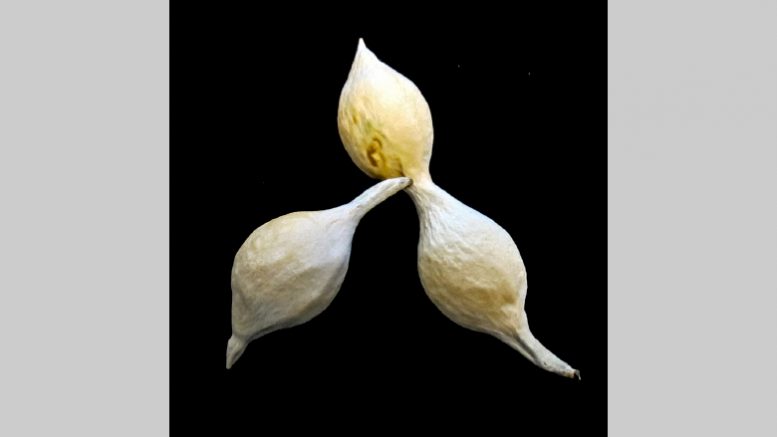 A package unexpectedly arrived from my father. It seems he may have had plans to kill off his only daughter.

My dad sent me a handful of beige seed pods, dried leaves and a note requesting my help identifying his sample. My mom’s handwriting, added along the bottom of his note, said, “don’t eat these.”

I’m left wondering, does she know something I don’t?

After some searching and an e-mail to a friend, I identified his sample as Dermatophyllum secundiflorum or by its common name, the Texas Mountain Laurel, a pretty but deadly plant.

Unable to escape predators, plants often use sophisticated skills to defend themselves. A member of the Fabaceae, or pea, family, the Texas Mountain Laurel employs fiendish chemistry to protect itself.

This particular plant contains an alkaloid compound called cytisine, a chemical that is similar to nicotine. Packing quite a punch, a single seed can contain enough cytisine to kill an adult.

Defensive strategies are costly for plants to produce. The energy going into chemical production is diverted from leaf and root growth. In the case of the Texas Mountain Laurel, animals carry away its seeds to eat their fleshy outer coating while the toxic seed passes harmlessly through their digestive tract.

The dispersal partners get a tasty snack while the Texas Mountain Laurel sends its children out into the wider world. It’s a pretty nifty arrangement and lots of plants employ similar solutions, but why?

To find the answer we need to take a step back in time, to about 140 million years ago when our world was wet and hot. It’s a complicated story, so let’s walk a narrow path and look at just the relationship between plants and insects.

The first plants were algae-like, soft structures that floated on the surface of the water. They reproduced by exchanging their genetic material through the water.

As our planet cooled and dried out, plants began to rise out of the water and needed other ways to reproduce. Enter flowering plants, or angiosperms — plants with external reproductive structures necessary to exchange their genetic material. The age of flower power had dawned.

During this period insects also underwent dramatic changes, most notably expanding their ability to travel upwards, presumably to reach their food source.

Scientists describe changes occurring in two organisms as co-evolution. Evolution is driven by slight differences one individual possesses which help them survive and reproduce. Their traits are passed along to their children; the more successful that trait is, the more likely it will spread.

Co-evolution is when two organisms evolve beneficial, or dependent, traits in parallel. Some animals also evolved complex relationships with both plants and insects, but let’s stay with the insect example.

The fossil record seems to suggest that plants would develop a trait — say, a slight change in chemistry, to deter insects from eating them. The insects who could adapt to this change had food to eat, generations of adaptation continued until an exclusive relationship developed between the plant and its insect partner.

Specialist insects provide a myriad of benefits to their plant partners: pollination, defending it from other attacking insects and seed dispersal.

Co-evolution is fairly common. Most of the insects who feed on plants are specialists — that is, they feed, or complete their lifecycle, on one species or genus of plants. It’s hard for them to change partners, so when a plant disappears the insect often does, too. Sometimes when insects disappear their animal partners disappear too and an entire food web can collapse.

Back to the package that started this story. My dad claims he didn’t know the seeds he sent were toxic — and I believe him. What I can’t figure out is why my mom warned me against eating them. She claims a mother “just knows these things.” I guess that’s evolution in action, too.

Beware of Some Pass-Along Plants