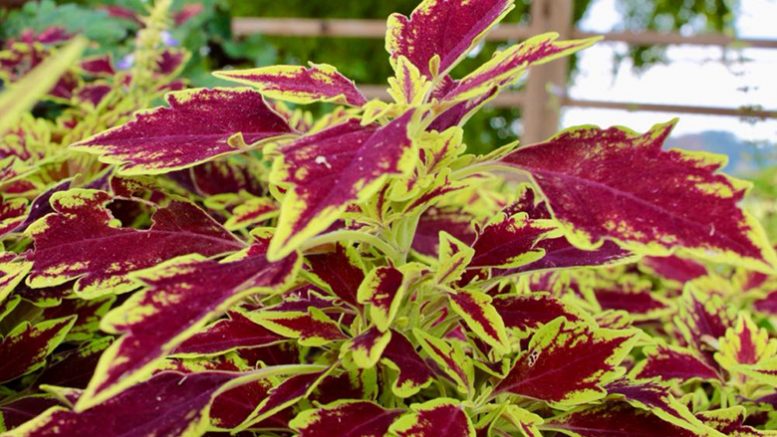 Coleuses come in all shapes and colors. Photo by Lise Jenkins.

Recently I have been pondering which annuals I want to put in the spring garden. While I emphasize perennials in the garden, I always need annuals to fill in the holes that inevitably appear. Just as nature abhors a vacuum, I abhor unexplained garden spaces.

Perennials will eventually fill in these gaps but the patient grower has to give them time. As someone who is into instant gratification in the garden, I find coleuses fill the bill. For providing instant color in the garden, it’s hard to beat this species.

A German botanist, Karl von Blume, first identified a coleus in 1853 in Java. Victorian gardeners enthusiastically embraced coleuses into their gardening repertoire – until this initial interest waned, causing the species to drop out of sight. A few fans lovingly preserved coleus until the 1980s when it was suddenly rediscovered by the public.

One man, Vern Ogren, is responsible for the breeding program that saved this species. By 1996, he had developed over 500 cultivars. He began a mail-order business he called Color Farm (alas, it is no more) that offered 200 cuttings from his favorite coleuses. When the New York Times profiled Ogren and his mail-order business, it generated enough interest to increase his profits by $15,000 in three months, thereby resurrecting the importance of coleus in the garden.

The modern coleus is far different from the coleus discovered by Karl von Blume. Not only does it now tolerate sun whereas the original coleus was a shade plant, it no longer frantically tries to go to seed during its entire growing season.

A member of the mint family, it’s notorious for producing a lot of sports, shoots that are different from the mother plant. It also hybridizes quite easily, thereby explaining the vast number of cultivars that are available.

What makes a good coleus? The first consideration is color. They need not be gaudy – although many are – but its color scheme should be pleasing to the eye. For instance, yellow leaves should not contain touches of gray nor should brown touches muddy red leaves. The second consideration is shape – a good coleus should look tidy, not a sprawling mess. Other factors to consider are a hesitancy to flower and genetic stability. The reason we don’t want a coleus intent on setting seed is because the coleus will die soon afterward – it’s done its job in preserving the species. Most coleuses will eventually require some pinching back to prevent flower formation later in the growing season.

Coleuses are great for adding instant color to the garden, a welcome sight when perennials have either finished flowering or haven’t yet started. Generally, the darker shaded coleus will tolerate more sun than the lighter colored ones. Those that have thicker leaves do better in the sun than those with thinner leaves.

They prefer well-draining soil but aren’t choosy about the pH unless the soil is very alkaline or very acidic. They need water and will droop dramatically to let you when they need hydration. They like warmth: Plant coleus whenever it’s time to plant tomatoes.

They are super easy to propagate. Place cut shoots in a glass of water until the roots appear. Then pot up – they root so quickly that they don’t require a root hormone. Propagation is important to think about if you have a favorite cultivar as chances are you won’t be able to find it during the next growing season.

Coleuses are wonderful additions to the garden. There is no reason you can’t enjoy this annual year after year – and as Martha says, that is a good thing.

A Crossroads of Empty Corners

The Power of Flower Essences

Be the first to comment on "The Charms of Coleus"