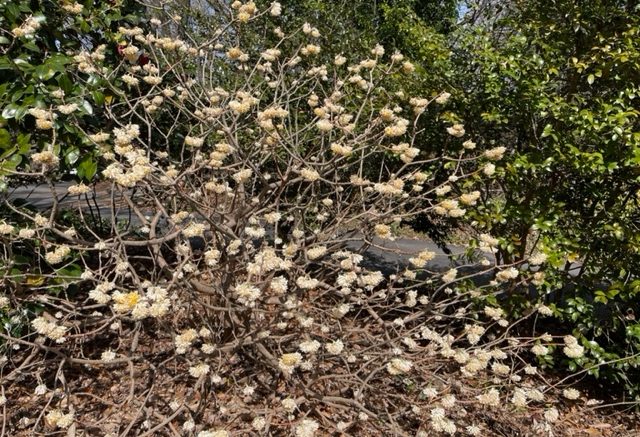 My Daphnes, alas, did what all Daphnes want to do: They died. I tried to grow two species, the evergreen D. odora and the deciduous D. mezereum (reputed to be easier to nurture), all to no avail. When I heard one of the curators at Duke Gardens admit that they, too, had trouble growing Daphnes, I knew it was time to throw in the towel.

Daphnes have so much going for them as they bear lovely very small blossoms that exude an intoxicating scent in the middle of the bleakest part of winter. A neighbor of mine propagates the plant and once produced a long row of them. Filled with gardening envy, I often thought, “How does he do it?” Alas, even his Daphnes succumbed to a premature death, leaving me to wonder whether these are naturally short-lived plants or ones that maliciously exist to torment us gardeners.

However, there is a plant in the Daphne family, Thymelaeaceae, that grows very well here in the Triangle – my six specimens have survived 15 years. Be sure to look for Edgeworthia, as it’s in full bloom right now. It has all the intoxicating characteristics of Daphne with two extra benefits: It bears larger blooms that are visible from a distance and, best of all, it likes to exist.

Like Daphne, Edgeworthia is a mildly poisonous shrub, an advantage should you be plagued by deer but a disadvantage if you have a mouthy dog or toddler. My deer have never touched it.

There are two species of Edgeworthia – sort of. Originally, I bought E. papyrifera and then later on began to notice that all the offerings were E. chrysantha. Tony Avent, among many authorities, now suggests that there is really only one species: E. chrysantha. While I would never refute anything that Tony Avent says, I can only state that my five papyriferas are smaller and more delicate looking than my chrysantha.

It’s a deciduous shrub with an interesting growth pattern. In the first 2-3 years, it will quickly grow to a height and a spread of 5 feet – and then it spends the rest of its life growing an additional foot. My five papyriferas are a foot shorter than my one chrysantha but this could be the difference in where they are planted.

In the spring after flowering, the shrub will sport attractive long green leaves that it will maintain until the late fall. During this period, it will develop bell-like structures along its stems that become apparent after the leaf drop. Then, in late February or early March, the bells open up to display yellow and white flowers, emitting that intoxicating aroma. This Chinese native, named after the Irish botanist, Michael Pakenham Edgeworth, has very little history attached to it. We know Edgeworth spent most of his life in India and introduced this shrub in England in 1800. It is thought that he first came across it in the Himalayan foothills. Perhaps the name was meant to include his sister, Maria Edgeworth, who financed some of his expeditions. We simply do not know.

It requires a sunny area but appreciates some protection from the harsh afternoon summer sun. Give it well-draining soil and watch it thrive. I never bother to feed it. When I first planted my five papyriferas (as they were called then), the instructions stated that these plants did best in a sun-shade area so I planted them under a tall elm tree where they received morning sun and afternoon shade.

I was new to gardening so didn’t consider the roots of the elm tree. Now there are several truisms when it comes to gardening: (1) If Duke Gardens cannot grow a particular plant, don’t even try it; and (2) Tree roots always win in the race for water. When there’s a shortage of water, the elm roots will grab what’s available. My Edgeworthias, when deprived of water, will develop drooping leaves, thereby filling my gardening soul with guilt.

When I acquired chrysantha, the instructions had changed, declaring full sun was acceptable. She’s planted far from the elm tree and has never drooped on me – no small matter when temperatures range in the high 90°s.

While Edgeworthias come in a small selection of colors, the common one found around here is ‘Snow Cream,’ a Plant Delights introduction.

Addendum: Ever since the Ukrainian grandmother handed a Russian soldier a packet of sunflower seeds, I have been thinking of this floral symbol of Ukraine.

Helianthus annus originated in North America. The Spanish introduced it to Europe where it spread in popularity to Ukraine and Russia; it was here that it became treasured for both its edible seeds and the oil derived from the seeds.

The “flower” is actually made up of 1000-2000 flowers gathered on a single platelet that is surrounded by ray flowers on the perimeter.

Sunflowers are relatively easy to grow. They will grow pretty much anywhere within a range of temperatures from 64°-91°. They aren’t choosy about their soil as they tolerate both sandy and clay soils. Plant the seeds at a depth of 1-3 inches.

Today there are many annual sunflowers that come in a range of flower size, height and even color. There really is a sunflower to satisfy every gardener. My suggestion is to be sure to choose H. annuus rather than H. debilis that bears more relaxed stems. You wouldn’t want to have to stake your sunflowers, now would you?