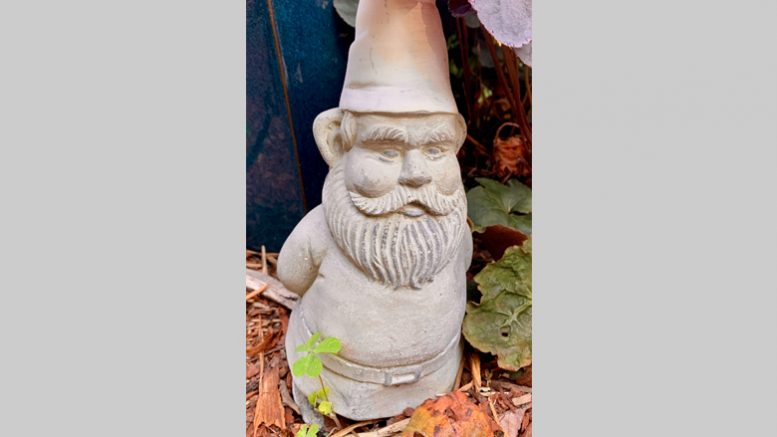 It began innocently enough: a small seedling turned into a foxglove, Digitalis purpurea. Lise sent me a photo of her new-found treasure, wondering how it got there as she knew the history of her neighborhood – and it didn’t include gardens. Then she spied her garden gnome. The only reasonable explanation was that an active gnome had planted a seed. Plants move all the time. We, however, aren’t aware of it because we think of movement involving locomotion. Plants, on the other hand, have methods of movement that don’t involve legs and limbs.

When I first moved into my house, the whole front yard consisted of English ivy. In one afternoon, a bobcat got rid of the English ivy – but it still appears in my yard, in places it never existed. Birds are responsible for these gifts.

Birds love these berries. The seeds glide through their digestive tracts and when released, they happily begin to establish a new territory.

Seeds can waft in the wind. That winter chickweed bears innocent flowers that produce the tiniest of seeds, seeds that a gentle breeze will pick up to deposit a distance away. That’s one of the reasons it is hard to rid your garden permanently of this annual weed.

Some weeds are heavy enough never to leave the side of the parent plant. This is why your hellebores quickly become patches of hellebores. The seeds are simply too heavy for much wind dispersal. Some of these seeds will be buried in the soil, where they sit and wait until the soil is turned, allowing them to germinate in the newly exposed light. Our soils are teeming with seeds, many belonging to undesirable weeds. This is why we don’t recommend tilling the soil unless it’s absolutely necessary. Tilling simply exposes these seeds to sunlight, allowing them to germinate.

Plants can also move via stolons (stems growing horizontally above ground) and rhizomes (underground stems growing horizontally). I once planted Tetrapanax Steroidal Giant on one side of the garden as I wanted to make a statement. Soon the lone individual because a family of five. Then the family decided it wanted relatives to reside in my neighbor’s yard while extending its range throughout my side garden.

All this movement was unseen because rhizomes are underground. Soon I was plucking up 25 specimens on a daily basis during the growing season. Because I didn’t want a Tetrapanax forest, I dug up the original family of five, making sure it didn’t end up on the compost pile. The relatives still reside in my neighbor’s garden but now leave my garden alone.

Mint moves by stolons and the rule for mint is that it must be planted where it can be contained. Otherwise, you will be overrun by mint, something that might sound lovely until it actually happens.

Another way to encourage a seed surprise is to add a gnome in the garden. Gnomes oversee their gardens very seriously and occasionally have been known to offer suggestions to the gardener. Obviously, the explanation for the sudden appearance of Lise’s foxglove is this: The Gnome did it. Otherwise, we’d have to put it down to QIDS: Quarantine-Induced Derangement Syndrome.

Doing Something About the Weather

The Garden of Wrath

Be the first to comment on "The Gnome Did It"