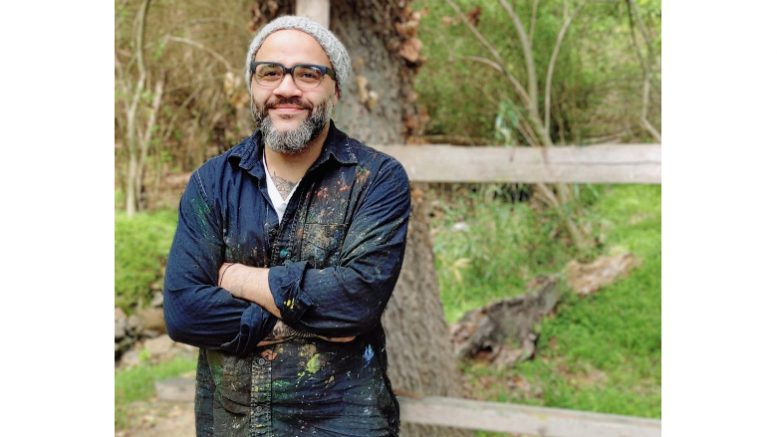 Note: If you or anyone you know is struggling, please reach out and seek help.

May is National Mental Health Awareness Month, established in 1949 to raise awareness of the importance of mental health to the well-being of children and adults and the communities in which they live and to combat the stigma often associated with mental illness.

Approximately one-fifth of U.S. adults (52.9 million) experienced mental illness in 2020, according to the National Institute of Mental Health.

In this two-part series, TLR profiles two local artists who have struggled with mental health and/or substance abuse challenges and have experienced the healing power of artmaking and the creative life.

Jengiz Musa, (https://www.instagram.com/jengiz_musa), began painting about five years ago at the age of 34 to “fill the hole,” he said in conversation. A hole he previously filled with heroin, and then alcohol. He’s since recovered from both. While Musa is familiar with the dark side of life, his is a story of redemption with a chunky component of creativity.

Musa is an entirely self-taught artist. “You’re always looking for your calling,” he said. “What is your special gift?” He had to grow up fast and fend for himself at the young age of 13 when he arrived in New York City. Earlier in his life, he had experienced trauma in his native Azerbaijan, first under Russian rule (“Our teachers would hit us if we spoke Azeri”), and later when the nation was breaking away from the USSR during the violent events of 1990 referred to as Black January. At the time, Musa was around age nine.

It took him a while to find his calling. It took hitting rock bottom and becoming suicidal. Then a friend posed a caring question: What if painting is your calling and you check out too soon? This prompted Musa to begin taking his artmaking seriously.

Before the pandemic, Musa was living in Juneau, Alaska where he was making a living with his paintings. He had seven shows there, two of which sold out. The community in Juneau played an important role in his final recovery, extending mental health services to him and allowing him to bring his painting materials to rehab. The abundance of wild natural places in Alaska also contributed significantly to his healing, as well as providing a spiritual boost.

Musa’s paintings are reflections of his soul but have universal appeal. “I feel vulnerable with what ends up in my work,” he said. “I fear my secrets will be exposed.”

His canvases are full of eyes and pained figures. Musa usually paints himself into his paintings as some expression of his own emotional landscape, small and tucked away so “perhaps people miss it,” he admitted.

“Painting gives me the spiritual connection I need,” Musa went on. “I find inner peace and calmness while painting.”

That may be why he engages the paint surface with his hands, foregoing painting tools like brushes or palette knives. “I have a lot of kinetic energy when I paint,” Musa said. “I paint several canvases at the same time.” In fact, he began using rolls of wallpaper as his canvas so he can easily cut several pieces to hang and work on. 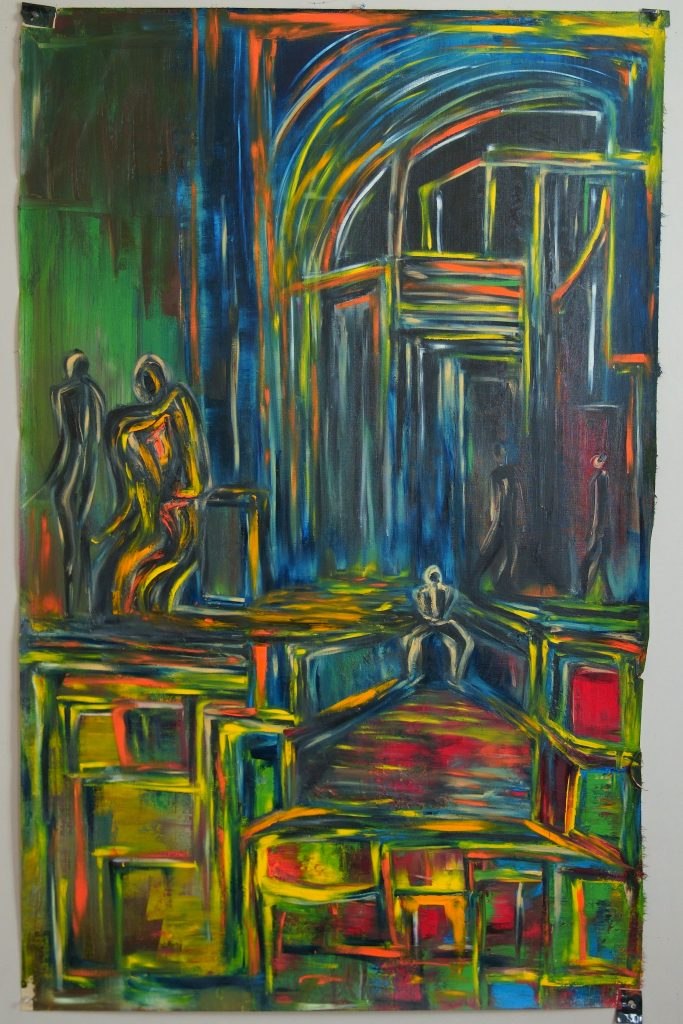 A major characteristic of Musa’s work is that it skillfully makes use of pariedolia, the human ability to see shapes or faces within random patterns. However, the results are much more visceral for him and the viewer because he paints with the energy and colors of what he’s feeling or struggling with in that moment.

By not restricting his focus to a single piece at any given time, Musa is able to move with the fluidity of his own mental and emotional states. He’s on medication to assist with PTSD and bipolar symptoms but still finds that painting is what prevents him from spiraling downward.

Musa feels he is now enjoying better mental health than at any time in his life but says, “Mental spirals are much worse than any chemical dependency.” Painting excites him and gives him a reason to look forward to the next day.

“Traumatic memories live within our bodies and within visual images; hence, processing the trauma through visual and body-based methods is most effective,” Hillary Rubesin pointed out. This accords with what Musa shared regarding his experiences at the low end of the bipolar spectrum, when his depression can manifest as physical illness.

Overcoming addiction is perhaps the easier half of the battle. Musa has learned that healing trauma is a lifelong process, because trauma permeates not only the mind, but also the body.

In addition, dealing with the stigma associated with mental illness is often a lonely experience. “Depression is frowned upon,” Musa said. “No one wants to talk about it.”

This is another area where creativity offers help. “The expressive arts often present a ‘safe,’ destigmatizing way to begin processing trauma and to regain some control and power,” said Rubesin.

There’s a tension in Musa’s paintings where the ‘gold’ within a person and self-destructive tendencies are both expressed. An overall harmony is present too, perhaps reflecting the influence of Musa’s Sufi spirituality. His paintings move and talk to him as they do to the viewer because a living quality is transferred into the work.

Musa only used oil paints until recently but is now painting with acrylic and has started to chisel his first statues in his backyard.

Pamir Kiciman is a writer/poet, artist/artisan, photographer, healer and meditation teacher. Learn more at https://liinks.co/reiki.wordsmith or contact him by email at pamir.kiciman@outlook.com.

Be the first to comment on "The Healing Power of Artmaking and the Creative Life: Part I"