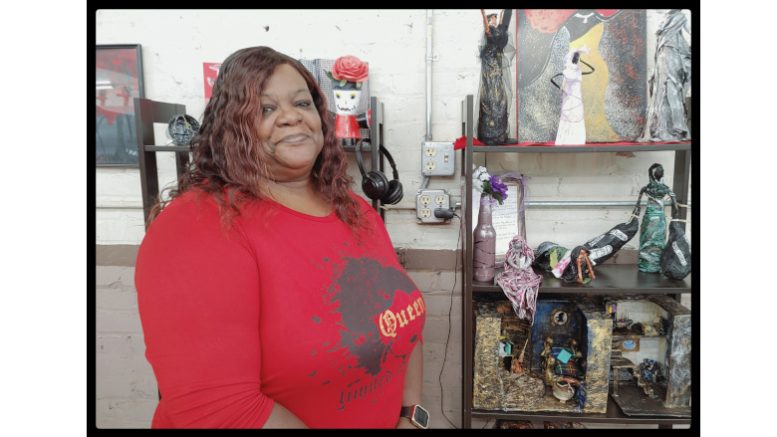 Many mental illnesses don’t have a single origin. There may be several possible causes, known as ‘risk factors.’ The probability of developing mental illness increases the more risk factors one has, according to the U.S. Department of Health and Human Services.

Local artist, author and veteran Loretta Morris-White exemplifies this etiology. She has a history of chronic homelessness and of being the victim of domestic violence. In April she was selected for HOME? An Artistic Exploration of Housing in the Triangle — an exhibition presented by the Orange County Arts Commission in partnership with the Orange County Department of Housing and Community Development. HOME? exhibits works from visual and literary artists.

Morris-White said her journey began at age 17 when she encountered military recruiters in her hometown. She enlisted and was deployed to Stuttgart, Germany. A year later, she met her husband, who also was serving in the military.

“I didn’t even know what domestic abuse was,” Morris-White said during a recent conversation at her shared studio. “I tried to tell my husband’s commanding officers about it. They said, ‘It’s okay, he’ll change.’”

Morris-White said when she shared her story of domestic abuse with family members, “they told me to pray about it.” Morris-White said her situation deteriorated to the point she was left with no choice but to threaten to go to the local police in Germany for help.

Morris-White said that, unfortunately, the program did not alter her ex-husband’s behavior. “He never stopped drinking and continued hurting me physically, emotionally and mentally,” Morris-White recounted tearfully.

It wasn’t until 2010 that a Veterans Administration doctor explained to Morris-White that a previous diagnosis of anxiety disorder was not accurate and that she suffers, instead, from post-traumatic stress disorder (PTSD). She said she subsequently received individual therapy for PTSD and found the treatment helpful.

Morris-White said she began writing long before exploring artmaking as a means of therapy to cope with her PTSD symptoms.

“I started writing because that was the only way I knew to express myself,” she said. “I had so much hurt, and I felt that no one understood me.”

After discovering and practicing personal journaling to aid in her own healing, Morris-White self-published several journal-style workbooks for veterans, men and anyone struggling with PTSD.

Because she struggled for so long with no one to advocate on her behalf, Morris-White said she became an advocate for herself and “hurting communities.”

Her books My Sylent Screams and From Bag Lady to Boss Ladie tell her own harrowing story. Morris-White has written several plays as well as a workbook for aspiring entrepreneurs.

A friend, Jasmine Willingham, inspired Morris-White to begin creating art when the two attended Seminole State College of Florida together in the late 2000s. Willingham showed her “how to use recycled materials to make art,” Morris-White said.

“I didn’t know old things could be beautiful,” Morris-White said. What began as simple experiments ended up with works of sculpture displayed at the HOME? exhibit. Morris-White’s sculptures are miniature houses crafted from mixed recycled materials.

With Willingham’s inspiration, Morris-White taught herself her art by watching YouTube videos and developed her skills, learning how to use air-dry clay, foil, masking tape, hot glue and metallic paint.

Her sculpture, The Abandoned House, depicts an actual condemned house she was forced to live in. It is not a realistic depiction, she says, but one which expresses her anguish. After a decade of military service, Morris-White was honorably discharged in 1989, but claims she did not begin receiving disability benefits until 2019.

Morris-White’s largest piece, It Takes a Village, depicts her return to the Raleigh area where she connected with the NC Arts Incubator which gave her a new sense of home and support. The NC Arts Incubator is a 501c3 nonprofit located in Siler City.

An earlier piece called The Tree House represents solace and a sense of safety, Morris-White said. It is painted in camouflage, expressing the artist’s desire to hide from her abuser, she noted.

“Memories from traumatic events are often triggered by imagery, sounds and smells,” Pemberton-Smith continued. “On the Fourth of July, you may see warnings that soldiers may experience PTSD when they hear fireworks. Like these felt memories, expressive arts allow clients to process their trauma in a physical way.”

Another Morris-White sculpture, unofficially titled Dreamhouse, is like a three-dimensional vision board, expressing the artist’s and her family’s aspirations for home and work. Together with Jasmine Willingham, Morris-White wants to open an art gallery and café one day, which will include her and her family’s various ventures.

Expressive arts can be cathartic, according to Pemberton-Smith, and Morris-White continues to process her long years of trauma from domestic abuse and homelessness through artmaking.

“Stories told through art therapy often reflect on past trauma but also may give rise to hope for the future and healing,” Pemberton-Smith said. “Sharing your pain is not only healing for the storyteller but also for those witnessing the story.”

Morris-White said she also suffers from clinical depression. She recalls being homeless for protracted period of time with her four children. At times, Morris-White was separated from her children because she had to place them elsewhere to be safe, she said.

It took a long time for her to permanently leave her abuser, Morris-White said, due to the cyclical nature of domestic violence.

Morris-White said she and her children suffered greatly during that time in her life as they were shuffled from shelter to shelter. Morris-White admits she still feels lingering resentment and bitterness about her family’s lack of support during her marriage, and believes the U.S. military and VA failed her and her children.

However, Morris-White said she feels grateful for the assistance of social workers in the U.S. Department of Housing and Urban Development’s Veterans Affairs Supportive Housing program.

Today, Morris-White self-publishes her own books and has served as ghost-writer on a number of other books. She continues to sculpt and is currently working on a fantasy series of houses based on the Harry Potter books. Morris-White said she also plans to create pieces that educate the public about homelessness and domestic violence with fellow artist Ethan Morrow.

Note: If you or anyone you know is struggling, please reach out and seek help.

Be the first to comment on "The Healing Power of Artmaking and the Creative Life: Part II"