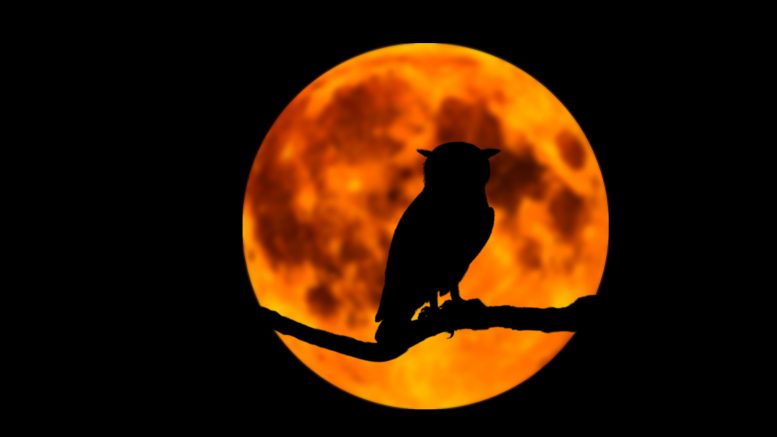 Autumn is owl season, and not just because of the birds’ long association with otherworldliness. While those connections in lore and legend go back thousands of years, autumn is owl season because “this is the time of year that owls begin to form pairs and establish their territories,” said John W. Fitzpatrick, professor at Cornell University and director emeritus of the Cornell Laboratory of Ornithology.

In the environs of Chapel Hill and Carrboro, the barred owl (Strix varia) is probably the most familiar owl, in part because it is highly vocal with a clear and distinctive call, ‘who cooks for you, who cooks for you too?’

Barred owls are crepuscular, meaning they are abroad in early evening. As dusk settles increasingly earlier in the autumn the activities of these sizeable birds, which can stand up to 2 feet tall, overlap with human activities, making them about as visible as owls are ever going to be. Owls are famous for their camouflage and notoriously difficult to spot. Birdwatchers say ‘an owl heard as is as good as an owl seen.’

Barred owls breed in the eastern half of the U.S. though the winter range extends to the Pacific Northwest. They are closely related to the spotted owls (Strix occidentalis) of the Far West that favor old-growth forests. “Barred owls are super vocal,” said Fitzpatrick, “barred owls farther south are more comfortable with human proximity. In the north, barred owls tend to be a little larger and avoid people. Pairs mate for life and tend to stay in one place once they have established their territory.”

The common, classic hooting helps to establish that territory and to attract a mate. “They also make a weird, spooky, howling or caterwauling,” Fitzpatrick noted. “Pairs will fly together and make the calls together. They are just saying ‘I love you and I’m here with you,’ but to humans the sound can be unnerving.” Especially on a full moon in the dead of winter.

Given the chilling sounds, silent flight, nocturnal habits and large staring eyes, there is little wonder cultures from around the world have associated the owl with mysticism for millennia. The genus for the barred and spotted owl, Strix, is an ancient Greek word that translates as “screecher” and denotes both “owl” and “witch.” The etymologically-related word “striga” is Latin for “witch.”

“Athena, the Greek goddess of wisdom, had a companion owl, which revealed unseen truths to her,” according to one compendium of mythology. “The Ainu in Japan trust the owl because it gives them notice of evil approaching. They revere the owl, and believe it mediates between the gods and men. Zulus and other West African nations consider the bird a powerful influence in casting spells, and think that using parts of the owl gives great strength to a person involved with magical incantations. The bird features prominently in Celtic folklore where it is considered both to be sacred and to have magical powers, again because of its abilities in the dark.” Notably, Celtic mythology does not specifically connect the owl with Samhain (pronounced “SOW-en”), the major festival that occurs Nov. 1. Samhain celebrates the connection between the living and the dead and was adopted by early Christians as All Saints Day, or All Hallows Day. That, of course, is preceded by All Hallows Eve, or Halloween.

The owl species particularly associated with Athena is the little owl (Athene noctura). And while the owl’s big eyes, steady gaze and contemplative demeanor all lend an air of wisdom, the association with Athena may simply be that the little owl is common in the area around Athens. The fact remains, however, that owls can see and perceive where and when people cannot. That equates to wisdom, at least metaphorically.

For the record, owls are not particularly smart birds. They are very good at what they do, but corvids, crows and ravens are the clever avians. Their use of tools, memories, ability to solve problems and to recognize individuals of other species are well documented.

“Owls have fascinated people around the world from time immemorial” said Karla Bloem, executive director of the International Owl Center in Houston, Minnesota. “Some of the oldest cave paintings known are in southern France, and there are owls represented in those paintings.”

The International Owl Center has an extensive list of owl myths and facts on its website. There is also a guide to living an owl-friendly life, such as taking down soccer nets at night: owls hunt at the margins of open fields and can easily get tangled in the nets. In addition to the barred owl, Bloem noted that the even larger great horned owl (Bubo virginianus), and the much smaller eastern screech owl (Megascops asio), are also common to central North Carolina. “Those owls are generalists. They eat whatever they can catch. They can live wherever there is sufficient food, but prefer cavities in big, old trees close to wet areas.”

She explained that the larger owls prefer voles and other small mammals, but will eat almost anything, including fish and crawfish. Screech owls will eat worms, insects, bats and other birds.

Acknowledging that owls are more often heard than seen, Bloem noted that “screech owls don’t screech. They whinny and trill, especially in the fall. The sound is straight out of scary movies. Barn owls (Tyto alba) make a bloodcurdling shriek, like the sound of a fanbelt going out.”

The National Audubon Society has a webpage for identifying owls by their calls, complete with recordings and clever commentary. It notes, for example, that the “gravelly” voice of the great horned owl makes it “the Barry White of the owl world.”

The great horned may be the iconic owl, with its ear tufts, rich dark color and immense yellow eyes. The tufts are just feathers, part of the facial disc that channels sound to the ears. The ears are asymmetrical, explained Cornell’s Fitzpatrick, enabling owls to sense direction and distance by the minute differences in sound reaching each ear. Most animals have slight ear asymmetry – dogs and even humans will cock their heads to attend a sound – but it is highly developed and accurate in owls. “They can catch mice in complete darkness or under the snow by sound alone,” said Fitzpatrick.

Those eyes that are so captivating to humans are fixed in their sockets, Fitzpatrick added. “That is why owls have to turn their heads to focus. They cannot turn their heads completely around but enough that, with binocular vision, they can see all the way around.”

The great horned owl is a pan-American bird, with a range that extends from northern Alaska to Tierra del Fuego, excepting only the heavy jungles of Central America and the Amazon. In central North Carolina, great horneds are the upland owls of mixed oak and hickory hillsides and forest. The barred owls are the lowland birds of valleys and water courses.

The Cornell Ornithology Lab has a vast website featuring a bird identification guide. Two of the featured birds are the northern cardinal, state bird of North Carolina as well as of six other states, and the eastern screech owl. Under the overhanging yews,
The dark owls sit in solemn state,
Like stranger gods; by twos and twos
Their red eyes gleam.
They meditate.

Motionless thus they sit and dream
Until that melancholy hour
When, with the sun’s last fading gleam,
The nightly shades assume their power.

From their still attitude the wise
Will learn with terror to despise
All tumult, movement, and unrest;

For he who follows every shade,
Carries the memory in his breast,
Of each unhappy journey made.

Be the first to comment on "The Hoot in the Holler"