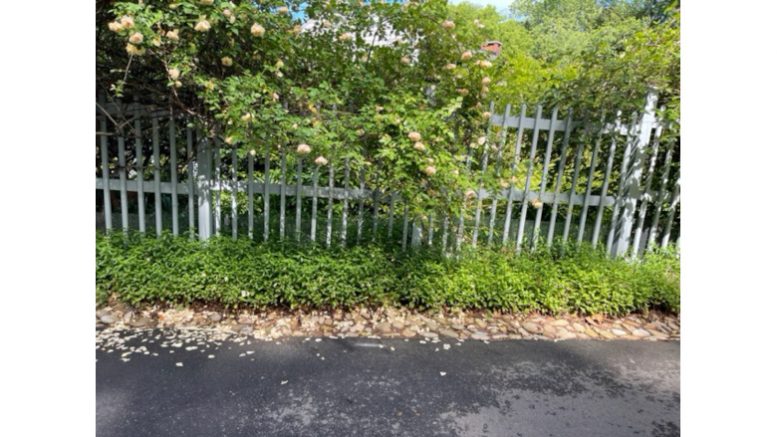 Whenever anyone asks me how to proceed with designing a garden, I hasten to inform them that I’m not a garden designer, just someone with rather strong opinions. And then I add: Start with the borders.

A garden will always border something, whether it’s a sidewalk, a street, a patio or even just a patch of grass. The border is the frame to your painting. My garden, one that I call “Organized Chaos,” has orderly borders that hold in the chaos.

Start thinking about a perennial border as annual borders are only there for part of the year – and do you really want to plant a whole new border year after year? Once you’ve determined you want perennials, then it’s time to turn your attention to those perennials you like, ones that are relatively undemanding.

I always begin with the color green because that is the color you’ll enjoy for most of the year. A good perennial will bloom for 6-7 weeks whereas others, such as peonies, will flower for only 3-4 weeks. Therefore, it’s imperative that you like the plant when it’s not in bloom, which is most of the year. This is one of the reasons azaleas don’t work for me as I don’t enjoy the plant when it’s out of flower.

I’m not a chartreuse fan but I love it in the garden because it causes my eye to stop, and that’s incredibly important. Think about it: A long line of magenta-colored azaleas (one I had at the beginning of my gardening career) results in a magenta-colored blob as, without any color differentiation, the eye doesn’t have a place to stop. And getting the eye to stop to look is the key to having a good perennial border. You want the eye to notice all the clever plants you have worked so hard to establish in the border. This requires the use of different greens with perhaps a reddish color shrub placed strategically.

However, the dominant use of red shrubs doesn’t work. A large development near me features small red shrubs planted everywhere in the front with no contrasting plants. To me, this is a horticultural failure because it is a monochromatic bore, lacking any contrast. Likewise, two decades ago, the Red Tip Photinia appeared everywhere, becoming red blobs that were all hit with a lethal fungal leaf spot. I would submit the overuse of any one plant without providing any contrast is a horticultural failure.

After you have considered color, then ponder the mysteries of leaf shape. One of the reasons azalea borders don’t work for me, even if they arrive in different colors, is that the shape of the leaves is all the same. Again, the eye has no place to stop. As many of our plants are small-leaved, consider breaking up that pattern.

Of course, you have to follow the sun and shade requirements of your particular border area and you might have a combination of the two as maturing gardens get shadier with age. On one of my borders the center features more shade plants while the outside edges house plants requiring sun.

On the outside edge I have daylilies, with spikey leaves, while a large crinum, ‘Super Ellen’, holds down the other end. Then I have included a small rose, ‘Sweet Pea’, that provides for smallish leaves, followed by Bletillas that have naturalized and variegated Polygonatum that have spread, anchored in the middle by a Fatsia that casts a chartreuse aura over that section. For me it works in that the leaves all have different shapes while the Fatsia and the variegated Polygonatum break up the solid green color. On the street side of my fence, I had a long strip that needed some type of vegetation, one that the deer would leave alone. Before I knew any better, I ordered Aster ageratoides ‘Ezo Murasaki’, a Japanese aster from Plant Delights even though it came with a warning that it “fills a large space rapidly.”

For a while the Aster behaved – and then it did something quite clever: It went under the fence and filled in a good part of my long bare strip between the fence and the street. Bear in mind that I planted one plant and it has covered this whole area. I haven’t a clue as to where it will stop.

Another area needing vegetation was the bare strip between the fence and my asphalt driveway. Here I decided to use the seediness of Helleborus x hybridus to my advantage. Gradually this area is developing into a hellebore border.

With both the hellebore and aster borders, my rules of contrast have gone out the window for several reasons. Both areas are long slim ones that are constrained by the deer requirement. Both plants are aggressive, determined to undermine other plants; by employing their aggressive tendencies in the confines of the spaces involved it has worked well. The aster found its own solution while I pat myself on the back for thinking up the hellebore one. It’s always lovely when an idea works out – it’s not always the case.