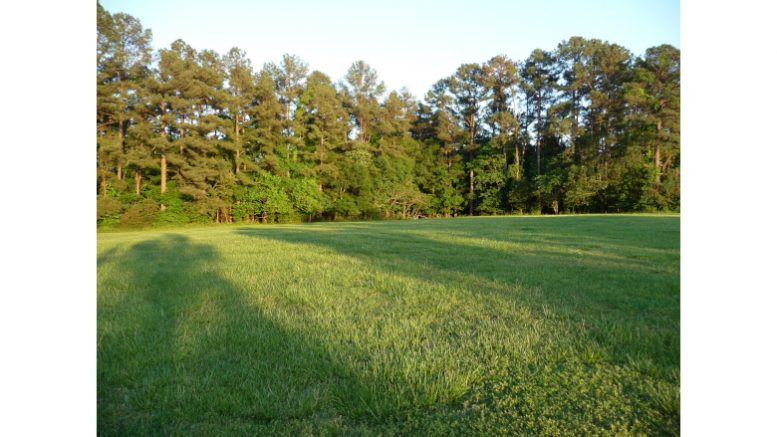 Just after midnight on Aug. 13, the silhouette of a slight figure, pale in the summer moonlight, could be seen among the graves in Carrboro’s Westwood Cemetery. It would pause briefly, noting something of seeming interest, then move on to others. Was it a ghost searching for a certain spectral soul?

No, it was semi-retired UNC math professor Bob Proctor carefully walking the line between showing respect and conducting research. He was checking the surface temperatures of gravestones to see how much they were still holding the day’s heat. Proctor is a longtime resident of the neighborhood just a long block from Carrboro Town Hall, where Westwood Cemetery is tucked into 3.3 acres at the corner of Fidelity Street and Davie Road. This graveyard adjoins more than 5 acres that include a lovely meadow flanked by woods and wildlife. It also provides the only green space available within walking distance of a densely-populated neighborhood that is home to a diverse — in terms of socioeconomic status, race, ethnicity and age — resident population. A public bus route runs through it, picking up passengers from the various multi-family housing units — apartment buildings and townhomes that are relatively affordable — as well as from modest single-family homes.

Proctor often enjoys peaceful daytime nature walks in the meadow, but on that August day he suspended his habit. The temperature had reached a blistering high of 96 degrees. More than four hours after sunset, his readings showed that the surface temperature of some tombstones had not changed at all, while across town by a shaded bike path the air temperature had dropped to 81 degrees. The data confirmed the professor’s hypothesis: the gravestones and structures in the Westwood cemetery, along with nearby asphalt parking lots, are contributing to the urban heat island (UHI) that runs the length of Fidelity Street. And extreme heat is the No. 1 weather-related killer in the U.S.

Both the open green space and Westwood Cemetery are owned by the Town of Carrboro. The Town’s Department of Public Works, which is currently responsible for selling and maintaining the burial spaces, has projected that Westwood Cemetery will run out of space for traditional burials within approximately six years, in 2027. It is therefore not surprising that the Town would look across the lane from the cemetery to the green meadow for expansion potential. This last and largest remaining green space in town has been a blank palette for Carrboro visions over the years. In 1989, there was solid support among the Carrboro Board of Aldermen (as the Town Council was formerly known) and the business community to use the meadow as the site for a new post office. But the post office needed highway access for its trucks so it ended up at the western edge of town.

In 2016, the Town jumped to accommodate Google’s request to place a telecommunications fiber hut in Carrboro. A wooded edge of this site quickly became home for the “Google shed,” though, ironically, the surrounding neighborhood still lacks access to Google internet fiber service. It has also been considered for a library, a public works maintenance yard and for affordable housing.

When Joe Guckavan, former Director of Public Works, reported the future shortage of burial space to the town council in October 2018, the council asked his staff to “evaluate current sites, look at green burial and other environmentally-safe solutions.” But the director’s assistant, Kristen Benoit, has confirmed that Westwood Cemetery was the only site considered. And despite the presence of granite outcroppings on the site, the meadow was proposed to serve the cemetery’s expansion needs.

When Chapel Hill Memorial Cemetery recently also faced a lack of space, it stopped selling traditional burial plots. Instead, it now offers only in-ground cremation spaces or places in the columbarium — a room with individual compartments for funeral urns. This change in offerings reflects a national and statewide trend of people choosing cremation, green burial and other nontraditional ways to dispose of human remains. In 2020, a majority of North Carolinians for the first time chose cremation over full-body burial. Projections indicate that by 2030, 70% of Americans will choose cremation.

In July 2020, the Town executed a contract with Carter van Dyke Associates (CDVA), a landscape architect and planning firm that specializes in cemeteries, to design a master plan for the meadow adjacent to the existing cemetery, including expanded burial options. That master plan for the site would add 5,200 new spaces: 1,460 conventional graves, 310 green graves and 1,040 in-ground cremains. It would also feature a columbarium for cremation urns, an ossuary for co-mingled cremated remains and a memorial wall.

During a stroll in early October 2020, Proctor saw a bulldozer at the far end of the green space. Concerned, he asked its operator whether the Town was beginning to expand into the meadow to create more cemetery burial sites. The operator told Proctor about the (previously unpublicized) plan to develop the green space and Proctor proceeded to spread the word among his neighbors. Having secured a copy of CDVA’s expansion plan, Proctor and other members of the Fidelity/Davie neighborhood brought their concerns to the Council on five different occasions between Oct. 27 and Dec. 1, stating their strong preference that the meadow and woods remain undisturbed.

While CVDA consultants were busily planning the cemetery expansion, Teska Associates, hired by the Town Planning Department, were hard at work creating Carrboro’s new comprehensive plan at a cost of $180,451. Christened “Carrboro Connects,” the plan articulates a vision for how the town will develop and change over the next 20 years. These two consulting groups, however, were unaware of each other’s efforts because the public works staff had not apprised planning department staff of their vision for the Fidelity/Davie site. CDVA saw it as an unused part of the Westwood Cemetery, while Teska described it in the comprehensive plan as “The Commons.”
A recently-released draft of the comprehensive plan describes the challenge that the Town of Carrboro faces in seeking more burial space. The plan frames the decision as a binary choice between utilizing Town-owned land for permanent open space or for cemetery expansion, but residents have argued that other options also deserve consideration.

As the Fidelity neighborhood’s concerns surfaced, Proctor contacted Councilperson Barbara Foushee, as well as Council candidates Danny Nowell and Aja Kelleher to discuss the issue. He knew that Carrboro is undergoing a period of racial reckoning and that any plan for the cemetery would need to consider the Black community’s longstanding preference for traditional burials over cremation. Foushee responded to Proctor’s inquiries by stating that, “As our town grows and changes, it is important for us to have a long-term plan for Westwood Cemetery that is accommodating for a variety of burial traditions.”

Kelleher viewed the issue through the lens of which options would best reflect Town priorities and realize the vision set out in the Town’s comprehensive plan. She had been digesting the hefty 196-page document and noted what she considered the lack of alignment between cemetery expansion and the comprehensive plan’s two foundations: Race & Equity and Climate Action. In an Oct. 10th e-mail, Kelleher’s campaign staff shared her analysis with Proctor: “If you read closely,” Kelleher wrote, “you will notice what I would call numerous ‘Carrboro disconnects.’”

For example, Kelleher noted that the Carrboro Connects vision explicitly “seeks to increase strategies to improve the resilience of BIPOC, low-income and other residents disproportionately impacted by climate change.” But doubling Westwood cemetery’s size would exacerbate the existing urban heat island effect, negatively impacting the health of those in the nearby affordable housing.

She also pointed out an “opportunity map” in the Carrboro Connects vision that identifies the Fidelity/Davie neighborhood as central to a “very high priority” area the plan proposes for a new Carrboro Park. Currently, these residents do not have equitable access to a Town park because all three parks of significant size — Anderson, MLK and Wilson — are located north of Main Street near the town’s higher-income neighborhoods.

Because of these and other conflicts between cemetery expansion and the vision articulated in Carrboro Connects, Kelleher asserts that preserving the Fidelity Street green space as is or as a park instead of as an expansion site for the Westwood Cemetery is more consistent with the Town’s comprehensive plan.

Implementation of the current cemetery expansion plan has already cost the Town $47,115. The estimate for phased implementation of CDVA’s Westwood cemetery design proposal is $1,697,000. The residents of the Fidelity/Davie neighborhood hope that Carrboro will take time to evaluate the costs and benefits of different cemetary site options as well as their alignment with the Town’s priorities as articulated in Carrboro Connects. The meadow and adjacent residences. Photo by Robert Proctor.

Proctor noted in his recent discussions with Foushee, Kelleher and Nowell that the Town could acquire cemetery land in a nearby beautiful rural setting as an alternative expansion site within just a few minutes and miles from downtown Carrboro. For example, the Judea Reform congregation acquired land for its cemetery a few miles west of Carrboro on Jones Ferry Road near the intersection with Damascus Church Road. According to Gary Phillips, a senior partner at Weaver Street Reality, “You could surely get land for $30,000 per acre” in that vicinity. Based on that pricing, the 3 acres of land needed to implement the CVDA plan could be purchased for less than $100,000, which would allow the open space on Fidelity Street to be preserved.

A decision on the matter is not imminent; Carrboro’s residents and Town government have several years yet to consider how, where, and whether to expand the Town’s cemetery space. Those who live in the vicinity of the meadow on Fidelity Street hope the Town and the community will use this time to think more deeply about the various options and their implications.

In the meantime, Bob Proctor is headed out for another stroll in the Fidelity Street meadow — while he still can.

Diana Newton is a long-time resident of Carrboro and Chapel Hill, a UNC alum, leadership development consultant, and film programmer at the Chelsea Theater. She is a founder of the Barred Owl Creek Neighborhood Coalition and is campaign manager for Aja Kelleher.

1 Comment on "The Meadow in the Middle: What Will Become of Carrboro’s Largest Remaining Natural Area?"