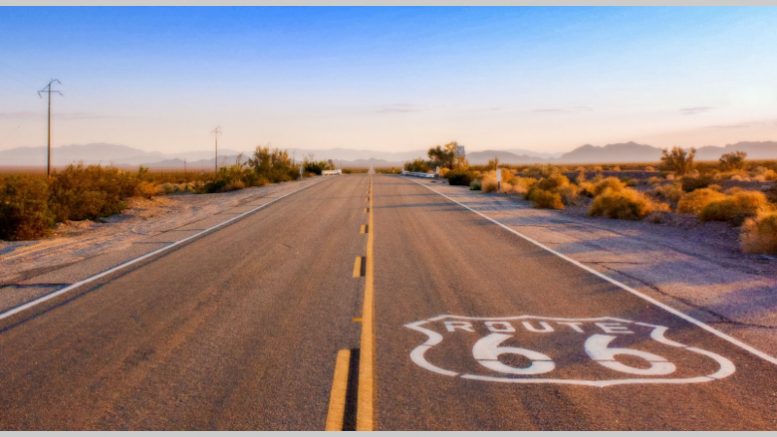 I had read the explanation in enough different places by enough different writers to believe that it must be true. Bobby Troup, whom we last saw in the movie “M.A.S.H.,” was driving west — in a ’41 Buick — with his first wife, when she winked at him or nudged him or both and said, “Hey, get your kicks on Route 66.” At least this is the consensus of the articles explaining the origin of the song about America’s most beloved, most famous highway.

“Wow! Narrow!” I thought, as I stood last May on the shoulder of the beloved and famous highway. “Incredibly narrow.” No bicyclist would last long on such skinny shoulders. Dump truck and semi drivers need exceptional skill, I judged, keeping today’s big rigs between the lines of a 1920s-era two-lane blacktop built to the standards of its time. Blacktop? Maybe concrete? I wasn’t sure of the pavement’s composition, but it certainly made my nitrogen-filled Pirellis sing like cicadas.

The tires were now at rest as I stood in the sun and studied Route 66; the cicadas — real ones — plus crickets, songbirds, frogs and all manner of other living things I couldn’t identify provided background music to a green and sun-filled landscape. I tried to find an appropriate simile. Out here it sounds like a high-speed bearing in urgent need of lubrication. The view: No houses, no drive-ins, no gas stations, no strip malls, no motels competed with nature’s earth-tone pallete out here. No souvenir shops, either. Why bother? I assumed the road had been marked in the past with highway signs every mile or so, but now I didn’t see a one in several hundred miles of driving. The maintenance crews had given up, I guessed, as their signs disappeared into garages and man-caves all across America. “Route 66, New Mexico.” Free souvenirs. Genuine, too. Who could resist?

I couldn’t see it, but I could hear it: Route 66’s executioner. Just over a weed-covered rise was I-40. No cicadas there, just the roar of engines heading west toward California or east into North Carolina. Unburdened by their mind-numbing sameness, the Interstate highways have become victims of their own success. The system is either filled beyond capacity in America’s urban areas, or it’s nearly empty in the nation’s less populated, less traveled regions.

General Eisenhower, returning home after the war, proposed such a system to expedite future defense of our coasts. President Eisenhower, in 1956, probably tossed the first shovelful of ceremonial dirt somewhere as his dream got underway. That shovelful caused a slow slide to irrelevance for Route 66; it was decommissioned in 1985. But decommissioning does not equal death, at least not for Route 66. True, some parts of it have been abandoned and thus have deteriorated to the point of uselessness. The remains are broken chunks of pavement, now home to weeds, bushes, and, beneath, burrowing animals. “It winds from Chicago to L.A.,” but nowadays only in Bobby Troup’s song, only on postcards, only in myth and memory.

Being famous and beloved would seem to earn Route 66 a place in the Smithsonian Institution, but moving and display would present logistical problems unknown to old rifles or coins or Dorothy’s red shoes. So it remains a museum piece without a museum, demoted to the role of an I-40 service road, a pavement more useful to travel-writers and photographers than to America’s motorists.

Actually, there are museums—-official ones at that—-devoted to Route 66. A billboard advertised one such museum as part of some guy’s car collection. Another ad invited motorists to EXIT NOW to tour the Official Route 66 Museum of Oklahoma. And a third billboard pointed to the Official U.S. Museum of Route 66. I pondered the use here of the word “official,” politely dismissed it as a sort of social algorithm, and decided there’s no harm in these “official” museums making money off the tourists. That is, after all, what tourists are for.

Still a fabulous superhighway in the Depression years, Route 66 was given a role by Steinbeck in The Grapes of Wrath (1939). He also gave it its lasting nickname, The Mother Road, perhaps with the miners’ term “mother lode” in mind. And Mom endures. We’ve all seen Route 66, identified by name or appearing anonymously or incognito, in movies, from Thelma and Louise to Easy Rider; and in an eponymous television program starring a Corvette whose driver sped from one weekly misadventure to another, preventing someone’s misfortune.

“Flagstaff, Arizona; don’t forget Winona, Kingman, Barstow, San Bernardino.” I listened for the pronunciation of the second syllable of “Barstow,” a famous shibboleth among jazz aficionados who know that rhyming “-stow” with “now” is incorrect; the Barstow citizenry, named Barstovians, rhyme “-stow” with “no.” Yes, by way of a very coincidental choice in song selection from a Sirius XM satellite high above, Troup and his mischievous wife Cynthia joined me for several miles as I sped down their highway, America’s highway, Julie London’s highway. Sparse traffic that day made it seem, really, as if it were my highway too.

Why Buc-ee’s Would Have Been a Boon

Be the first to comment on "The Mother Road"