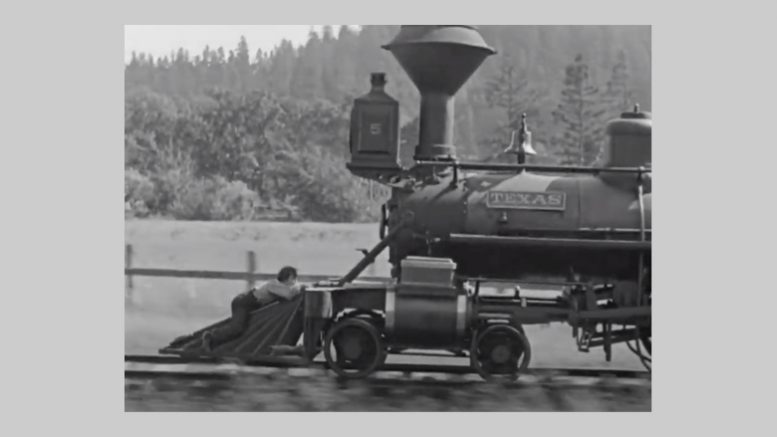 In October 2018, the Carrboro Arts Center screened a classic 1926 silent film, The General, starring comic actor Buster Keaton. Local musician Tim Carless accompanied it with his own live score, creating musical tension as Keaton clung to a steam train barreling down the tracks.

Sadly, the last eight years of Tim’s life were like that: hanging on while far more powerful forces — floodwater and the Town of Carrboro — slowly loosened his grip.

Tim Carless was a working musician from England who wrote, recorded and performed with the likes of Paul McCartney. He brought his talent, musical instruments and recording equipment to the place in Carrboro he would call home with his wife and two daughters.

The history of Tim’s neighborhood, once known as “Plantation Acres,” set the stage for what would happen to the Carless family and home. In 1980, the Town involuntarily annexed the neighborhood, where many homes date to the 1960s. Annexation infused thousands of tax dollars into the Town’s coffers annually. In fact, residential property tax is the Town of Carrboro’s single largest source of locally generated revenues, accounting for 58% of its general fund. In 2020, neighbors petitioned the Town Council to change the neighborhood’s name to Barred Owl Creek so that it would not be associated with slavery and oppression.

The modest Carless home sits in a dip on Carol Street right next to a stream known locally as “Toms Creek”— once a harmless series of wet weather ditches connecting to culverts beneath the streets. Years of development since the late 1980s, including construction of the McDougle School complex in 1993, created more impervious surfaces—and, thus, more runoff — than the stream and culverts were designed to manage.

As a result, the Barred Owl Creek neighborhood devolved into what is now a federally designated flood plain. Heavier rainfall associated with climate change, together with outdated canals and culverts, inevitably ushered torrents to the Carless home, which was repeatedly inundated.

Tim first sought flood relief from the Town of Carrboro in May 2013. His ex-wife, Olivia Davis, recalls: “I was eight months pregnant and six inches came in. Two months later, 36 inches came in with me nursing a two-week old. We had to live with my mother for a month. Tim lost every photograph, songbook and journal he owned.” She also remembers that when Town staff members came to assess the flooding, “There was a lot of throwing up of hands” and “We don’t know what to do” responses.

At first, Tim was shocked at what amounted to a shrug from the Town. It had no “shovel-ready” help to offer. And regulations prevented Tim from trying his own solutions because they could exacerbate flooding further downstream. Tim felt caught in a vise: The Town wouldn’t fix it, and wouldn’t allow him to do it himself.

In October 2013, the Town of Carrboro informed Tim that a Federal Emergency Management Agency (FEMA) mitigation grant for acquisition was a potential solution. If approved, his property would be sold and no one would ever be allowed to live on it again. With hope, Tim applied with the Town’s oversight of the process.

But for years the Town of Carrboro’s stance has been one of bureaucratic avoidance and minimal support for homeowners who experience stormwater damage. The Town acknowledges its responsibility for management in the public right-of-way but will not engage in “one-off” interventions that it alleges would cause a negative impact downstream. For those who have relied on the Town’s only offer — FEMA mitigation for either acquisition or elevation — the process entails a years-long waiting game for funding review with no guarantees. Tim’s first buyout grant “did not move forward” to receive funding. He and the Town never agreed as to who botched the effort.

Davis says the home flooded as many as six times every year. Tim replaced the HVAC system four times. Dry wall turned to mush and had to be repaired. The pattern — rain, panic, save your stuff, flood, calm the kids, and repair — became a repetitive nightmare and the ongoing stress took its toll on Tim’s health and his marriage.

A 2016 Town engineering study found that the Carol Street culvert was indeed aging. In contradiction to its position on avoiding downstream impacts, Carrboro offered hope to the neighborhood: “Public Works staff has inspected and is aware of the condition of these culverts. A more detailed plan for repairing, rehabilitating, or replacing these culverts will be developed in the near future.” Yet the Town made no repairs and discontinued a bus route that had crossed it for fear of collapse. Not only did the flooding worsen unabated, now there was one less transportation option. Despite the Town’s creation of a Stormwater Utility Fund in 2017 to provide “services to manage the water quality and quantity of stormwater runoff and maximize quality of life/place and resiliency in relation to rainfall and runoff,” Carol Street remained untouched.

Tim and the Town submitted another FEMA mitigation application in 2019. Lingering disagreements turned into litigation. Tim despaired of a solution, but as a working musician, his home was the only major asset Tim could hold onto for his girls.
In a poignant 2019 Instagram plea, he invoked the Town’s Code of Ordinances, Section 18-1 (b): “Effective stormwater management should be provided to protect, to the extent practicable, the citizens of the town from the loss of life and property damage from flooding.“

Fueled by Tim’s story and enraged at the Town’s decades-long inaction towards managing their neighborhood’s stormwater problems, Barred Owl residents banded together. Led by Aja Kelleher, in May 2021 they formed the Barred Owl Creek Neighborhood Association as a way to collectively advocate for stormwater mitigation and other service needs from the Town.

That same month, Tim was suddenly diagnosed with esophageal cancer. He died within weeks on June 14th, at age 55. The next day was the birthday of his two daughters. Shocked neighbors gathered in a candlelight vigil to read his ex-wife Olivia’s agonized Facebook post aloud during that night’s Town Council meeting:

“Tim’s voice was never heard, never respected. That level of stress he experienced for over eight years, plus the unavoidable mold undoubtedly created a very toxic environment for him and the girls. The way I see it, Town of Carrboro, you have blood on your hands.”

At the June 22nd Carrboro Town Council meeting, several Council members reflected on what they had heard. Sammy Slade said:

“I feel really bad at how we didn’t go as far as we could have. While we were legal with what we did, I think we had an opportunity to ramp it up in terms of our waiting for a response from the Federal government and applying for that grant. We could have fronted the money to relieve the family from having to live in a flooded house. The experience really should have taught us something, and I think now is our opportunity to, as late as it is, do something about this.”

But this heartfelt moment of contrition was followed by Mayor Lydia Lavelle’s focus on the legality of purchasing a resident’s home. “The opportunity” then sputtered into legal embers.

The Barred Owl Creek Neighborhood Association has since followed up with the Town to assert its need for stormwater intervention. Yet as recently as June 2021, in a meeting with the Association’s co-managers, then-Carrboro Town Manager David Andrews still proclaimed, “We don’t do culverts” and “We don’t know what to do” about the widespread flooding there. He agreed to another engineering study just before retiring in July. The Town Council also called for a “direct communication meeting” between the Council, staff and Barred Owl neighbors.

So far, no engineering proposals have been solicited, no meeting has been scheduled, and no funding — from FEMA or the Town of Carrboro — for Tim’s house has been provided. The balance in the Stormwater Utility Fund currently approaches a million dollars. Large increases in 2021 property tax assessments will further pump up its balance and overall Town revenues.

In the wake of Tim’s death and persistent Town inaction on many fronts, Tim’s friend and neighbor Aja Kelleher said simply, “It is times like these that reveal your character. We now see Carrboro government for what it is.” Kelleher ‘s sense of injustice about the Town’s response has spurred her to further action and she is now running for Carrboro Town Council.

Just before Tim died, he and a friend listened to a Warren Zevon song with a particular lyric, “There’s a train leavin’ nightly called ‘When All is Said and Done’.” Tim piped up weakly: “Such a good line.” A public celebration and memorial concert — Tim Carless Among Friends — that was to be held at the Arts Center has been postponed due to COVID.

Diana Newton is a long-time resident of Carrboro and Chapel Hill, a UNC alum, leadership development consultant, and film programmer at the Chelsea Theater. Recently she became co-manager of the Barred Owl Creek Neighborhood Association and is campaign manager for Aja Kelleher.