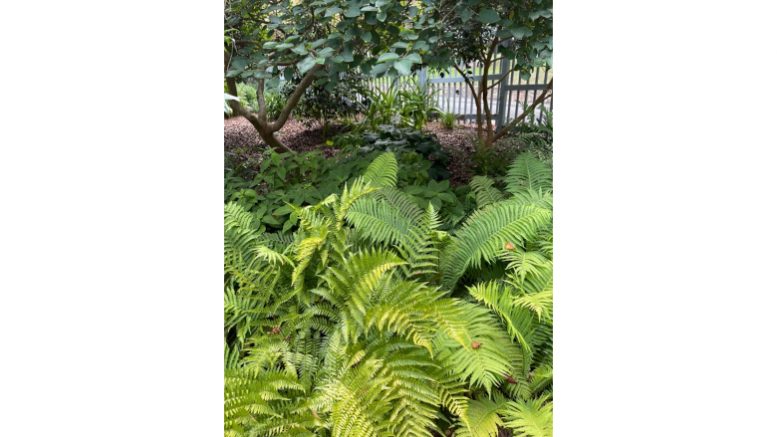 As gardens age, shady conditions take over. Where once you were gardening in full sun, you find now you are coping with shade. And therein lies the problem, because shade gardening conditions are very different from sunny ones.

I once had a thriving perennial border that was in the sun. One day, I realized that the middle of the border was no longer flourishing, but I couldn’t fathom why. Because I gardened in the early morning when that area was filled with sun, I had not attended to the Japanese maple, one that had started life as a sprig and was now a grown-up. I observed that it cast its shadow over the middle portion of the border after the time of day I gardened. Planting a Fatsia and a Polygonatum in the languishing section of the border solved the problem as both of these plants tolerate the condition known as sun/shade.

The problem with shade is that it comes in many different forms. Deep shade receives two hours of direct light, medium shade might have up to four hours of light, light shade receives six hours of light and the aptly-named sun/shade area that lies in the sun part of the time and in the shade part of the time. Woodland shade areas experience winter sun when the leaves are off the tree. Then there is the dreaded dry shade that is limited in both light and moisture.

Plus, the gardener has to determine how light those light hours really are. Is it brilliant sunshine? Is it muted? Light has several different forms and intensities – it’s enough to make your head spin.

What makes shady areas so difficult when planning a garden is that you have to observe them not only during the right growing season but also for the whole day to determine what type of shady area you have. Viewing the area at the same time every day does not give an adequate picture, as my failure to read my perennial border illustrates. You also have to take into account when the plant is in active growth. The area could be bathed in winter sunlight at a time the plant in question is waking up.

For example, hellebores are promoted as being shade plants despite the fact that their native habitat is a sunny one. They are called shade plants because they can tolerate summer shade when they’re dormant. In autumn, when they begin to grow new foliage, the tree leaves are falling, thereby giving the hellebores more light – they actually bloom and thrive in the winter sun.

Some plants are inaccurately classified as shade plants. Hostas are a group of plants that we have firmly fixed in our minds as shade lovers. In truth, hostas want light; they thrive in morning sun but need to be shielded from the harsh afternoon sun. It’s the afternoon sun that scorches their leaves, not the morning sun. They flourish best in the kind of area we describe as sun/shade.

The shade garden is the place to explore texture. For example, I love the look of the spikey leaves of Aspidistra combined with the lacy lavender leaves of Athyrium niponicum, the Japanese painted fern. Both plants do well in medium shady conditions.

In fact, there is a whole world of ferns for you to discover. My rambling rose, ‘Peggy Martin,’ created under her umbrella shape an area of shade. This wasn’t a large area, but it was exposed because those entering my house have to walk under Peggy’s thick canes. Three years ago, I planted five different ferns in this area that gets some light — but never direct sun — and it truly was a perfect answer to a barren area. The ferns have flourished under Peggy’s tutelage.

For further information on this topic, consult “The New Shade Garden” by the renowned horticulturalist, Ken Druse. It’s worth reviewing his suggestions because, sooner or later, all our gardens will grow shadier.

How Sweet They Are

Be the first to comment on "The Problem with Shade"