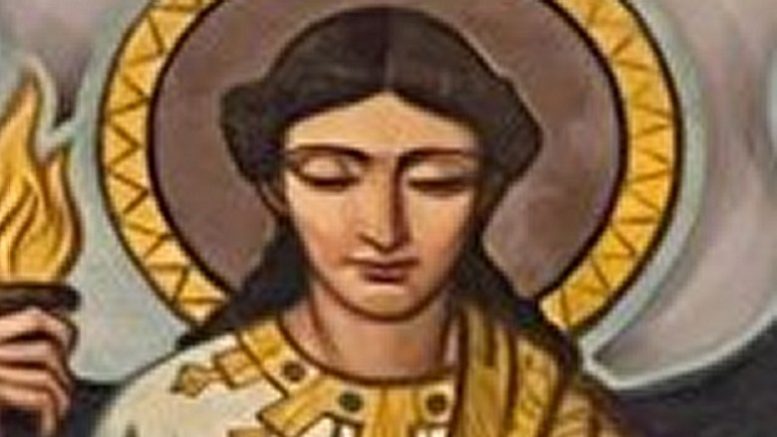 A tattered and torn angel that once graced the walls of a 1920s-era Irish Catholic Church in the Southside of Chicago found new life in Chapel Hill when two women searching for religious artifacts to decorate Christ United Methodist Church (CUMC) in Southern Village in 1999 made the discovery.

The following is the story of how a magnificent oil-on-canvas creation survived the demolition of its original home and spent years decaying in a cramped religious salvage warehouse before finding its way to Chapel Hill.

Sandra Stewart, an art historian, living in Chicago, and her mother, Alexandra “Sandra” Henson, chairperson of the CUMC Building Committee in Chapel Hill, were on a quest. They were not sure what specific objects they might be seeking when they went to an architectural supply warehouse in a rundown area in the Southside of Chicago in 1999.

They knew only that they were looking for religious artifacts to decorate the newly built CUMC under the leadership of its first pastor, Rev. Raegan May. Henson was determined to find “antiquities” that would give the church a feeling of being “old and established,” she said.

“I wanted to collect things that would make the church feel like it had been there a long time, not modern and cold,” Henson said. That vision was shared by D.R. Bryan, the builder of Southern Village who donated the land for the church.

“He [Bryan]wanted something that was not just a brick and mortar building; he also wanted the exterior of the church to look as if it had been here a long time,” explained Dr. Daniel Steinert, director of music ministry at CUMC.

“When I discovered the angel, it was crudely hanging against the wall of the crowded warehouse,” said Stewart. “It had long vertical creases with paint loss on the surface.”

“The angel” was an enormous painting, and Stewart recognized its potential. “Although it was in poor shape, we knew it was something the committee would be interested in. It was oil painted on linen canvas and was one of three offered for sale,” she said. The oil-on-linen painting before its restoration shows the wear-and-tear of the years. Photo by Sandra Stewart, courtesy of Sandra Stewart.

Sandra Henson, and her husband, the late Don Henson, were charter members of CUMC and purchased the angel as a donation for the church in 1999, thus beginning the pursuit of its restoration—a process not completed until 2008. The undertaking was guided by the North Carolina Museum of Art, with the restoration and conservation treatment done by Watherson Associates Inc. of New York City.

Watherson Associates Inc. provided an invoice to Henson describing the conservation treatment they would provide: “… areas of scratch coat and plaster with wall paint and adhesive had been left on the back of the canvas.”  After the back of the canvas was completed, they could start the more “colorful parts”—cleaning, lining and retouching of paint losses.

The painting was shipped from the North Carolina Museum of Art to the art restorers and returned to the museum, with final arrival at CUMC in 2008.

At 16-and-a-half feet wide and 11-and-a-half feet high, the seemingly hard-to-miss angel hangs on the back wall of the sanctuary where one would walk under to it for the way leading into the narthex. Yet, apparently, some people do carry on their prayers without notice of the artwork’s imposing presence.

“One thing I find interesting is how many folks ‘miss’ that the angel is even in our space … many people worship here and are unaware they have an angel watching over them,” said Lead Pastor Ben Williams of CUMC. The angel after restoration and mounting inside CUMC in Southern Village. Photo by Michelle Cassell.jpg

CUMC had limited information available on the history of this work of art until now.

St. Basil’s Church on Garfield Boulevard in Chicago was founded in 1904 to serve Irish and German Catholics in the Back-of-the-Yards neighborhood. Mass was celebrated in an abandoned blacksmith shop and later in a combination church-school building. The permanent church was completed in 1926.

According to the linked website, created by the granddaughter of the angel’s artist, that structure was designed by a team of architects who modeled it after the Byzantine church St. Sophia in Istanbul, Turkey. An article published in July 2012 by WBEZ in Chicago noted, “St. Basil’s Church was not very large, with seating for about 1,200 people. What made it impressive was the décor.” The article went on to describe the ornate interior, as well historic changes in the composition of the neighborhood during the 1980s.

It was those demographic shifts and declining Catholic population that led to the closing of St. Basil’s in 1990 and the ultimate demolition of the structure.

Stewart told The Local Reporter (TLR) that their angel and two others were saved from the wrecking ball only three days before the church was obliterated. According to the salvage warehouse’s information provided to Stewart, “The angels were painted on linen canvas and attached to the walls of the church, so it was not an easy process to remove them without damage.”

“They told me if they had not used a glue called rabbit glue, the paintings would not have been able to be removed,” said Henson. Rabbit glue has a unique characteristic of stiffening and tightening the canvas, a process dating back to the Renaissance.

Who created the angels?

In 1935, Rev. John T. Bennett of St. Basil’s hired John Mallin to decorate the entire church in Byzantine style. The contract with Mallin, dated April 29, 1935, gave specifications about the creation of the angels:

“Pendatives: The four pendatives will be decorated with one angel in each and a border around the edge, richly decorated.”

Very detailed descriptions of the decorations can be found in a brochure produced by Mallin. A pamphlet made by Rev. Bennett in 1935 and given to his parishioners and friends gives intricate information about the decorations:

“These decorations are in the Byzantine style of ornament in which red, blue and gold colors predominate. The cobalt blues and vermillion reds are made from very expensive minerals and are very durable. The gold is real beaten gold leaf over 23 carats fine…the gold leaf is laid over silver leaf (so as not to be affected by its plaster base), ensuring for all time its brilliant beauty … The paintings in oil on canvas were executed by post-graduate artists of the one world-known Byzantine Art School founded in Vienna, where Mr. Mallin was a pupil and tutor.”

These documents can be viewed on the site created by Mallin’s granddaughter.

The paintings hung on the pendatives were to display four archangels recognized by some sects of Christianity: Gabriel, Raphael, Uriel, and Michael, each identified by name and symbols of his office, according to the letter.

Archangel Uriel is depicted in the painting Henson bought from the salvage company and paid to restore. Only two angels remained because the fourth was destroyed with St. Basil’s.

Uriel is known in the Russian Orthodox tradition and folk Catholicism (in both of which he is considered one of seven major archangels) and is recognized in the Anglican Church as the fourth archangel. According to Christianity.com, Archangel Uriel is acknowledged by multiple sects and faiths.

An angel gets to spread its wings

When the Archangel Uriel ultimately arrived for installation at CUMC in 2008, it took weeks of planning and several days of building scaffolding. Skilled workers also reinforced the stays on the frame of the painting before hanging it.

Uriel is considered the angel of wisdom, who shines the light of God’s truth to those who seek information, solutions, or even require wisdom. He is often portrayed holding a book to symbolize wisdom and a torch to symbolize the “fire of God.”

“I am particularly drawn to the torch and the book the angel is holding. For me, the light enlightens God’s Word and helps us to better ‘see and understand’ what God would have us know,” Pastor Williams said.

“Our angel reminds me that the heavenly realm is not far removed but closer than we dare dream or imagine. I pray it does the same for all who enter Christ Church’s sacred space,” he said. 5 Comments on "The Resurrection of an Angel: Artwork Takes Wing to Chapel Hill"