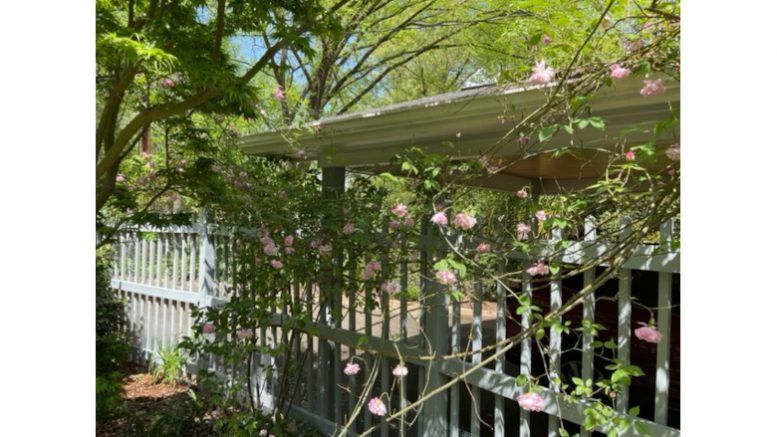 Once I had set my mind to planting sustainable roses throughout the garden, I had no idea where to begin. Seemingly, there are thousands of varieties (in rose language, I quickly learned that rose cultivars were rose varieties) but many were impossible to find. I was flexible in that I didn’t need to fill vases with roses, surely the main reason for hybrid teas.

All I wanted were some handsome roses that required no spraying – and were more interesting than ‘Knockout.’ Fortunately, I liked the color pink since most of the old garden roses came in an assortment of pinks. I also preferred roses that bloomed more than once. And I knew that I wanted roses that could grow on their own roots.

Why am I so insistent on having roses growing on their own roots? I want roses that are strong enough to exist on their own roots rather than dependent on grafted roots. I disliked the idea of having the roots of Rosa multiflora or ‘Dr. Huey’ in my garden as these roots can take over. I also didn’t want to worry about the suckers thrown up by the grafted root system.

Growers frequently use the grafting process because grafted roses take off more quickly than do own-root roses. However, over time, own-root roses not only catch up but live longer than grafted-root roses.

Now, I’m very sympathetic to the pressures growers have to cope with so this is not an anti-grower screed. The buying season is relatively short, usually no longer than six weeks here in the Triangle, and many growers receive payment for only sold plants. Consequently, many roses (even ‘Knockout’) come grafted and over-fertilized, thereby enabling the rose to stun you with beautiful blooms in the store. That doesn’t mean it’s necessarily a healthy rose.

What I discovered is that there are lots of good sources for own-root roses, some local but most are mail-order. All roses grown on their own roots will come with “own-root” in their description. Among those selling only own-root roses are: (1) The Antique Rose Emporium in Texas; (2) Heirloom Roses in Oregon; and (3) Roses Unlimited in South Carolina. Witherspoon Roses also carries some own-root roses.

Hounding various internet sites, I discovered the Texas A&M Earth-Kind roses. In 2000, Texas A&M began their rose trials, planting a huge number of rose varieties, all on their own roots. The roses received water their first year and then were on their own for the following six years. Those that survived – no hybrid teas were among them – won the designation of “Earth-Kind” rose. For the list, visit https://www.aggie-horticulture.tamu.edu/earthkindroses/.

Starting out with some Earth-Kind roses proved to be a good choice. Because these trials are ongoing, new roses are periodically added to the list. Among those that I chose, ‘Rêve d’Or’, ‘Georgetown Tea’, ‘Spice’, ‘Ducher’, and ‘Belinda’s Dream’ are still thriving 10 years later. ‘Climbing Pinkie’ and ‘The Fairy’ left the garden after five years because I simply disliked them. Over the years, I have discovered that it pays to replace those roses I do not enjoy. “Disease resistant” is the other term found in the description that is imperative. After all, what’s the point in planting a sustainable rose that isn’t sustainable? The Antique Rose Emporium and Heirloom Roses have developed their own line of “disease resistant” roses. David Austin Roses carefully list those roses (such as the one named after his granddaughter, ‘Olivia Rose Austin’) that are “disease resistant.”

Now “disease resistant” doesn’t mean you won’t find a trace of blackspot on your roses. We have a tough summer our roses must endure. What “disease resistant” indicates is that the rose is strong enough to withstand the rigors of this fungal disease whereas so many of the 20th century hybrid teas could not.

I found through research that I wasn’t just limited to Earth-Kind roses – they’re just a good place to start. Many of the “Buck Roses” hold a particular charm. Dr. Griffith Buck, a horticulturalist at Iowa State, was passionate about roses. Intent upon developing roses that could withstand the rigors of Iowa winters, Dr. Buck hybridized many varieties, planting them in that good Iowa soil. Because he received no encouragement from Iowa State, these roses had to survive on their own without fertilizers or chemical treatments.

Fortunately, he gave these roses away to friends and family members because the University plowed up his fields upon his death. Horrified, all those recipients of his generosity pooled their roses, giving the University of Minnesota the inventory for what became known as Buck Roses.

I’ve become a big fan of many of the Kordes roses (https://www.kordes.us). This German hybridizer produces many sustainable roses, including hybrid teas. This is a website for research only but you can find many Kordes roses at Roses Unlimited.

Another resource might be growing in your neighbors’ gardens. A friend grew a charming climbing rose and told me that she never sprayed it. Today, ‘Blossomtime’ resides in a prominent place in my garden, never showing any signs of blackspot.

The last resource I shall mention here is the American Rose Society that has an amazing amount of information about roses. The Society sends out its booklet, “Selecting Roses,” to members ($40 annual dues) on a yearly basis.

There is also a tremendous amount of information on the websites of Heirloom Roses and The Antique Rose Emporium. My preferred source, Roses Unlimited carries a staggering number of varieties but you must do your homework first before ordering. The roses arrive overnight in beautiful shape.

One word of caution: Roses are very addictive. Success with several will cause you to increase your collection until you find yourself thinking of moving to make room to grow some more. Don’t say I didn’t warn you. Be the first to comment on "The Search for Sustainable Roses"