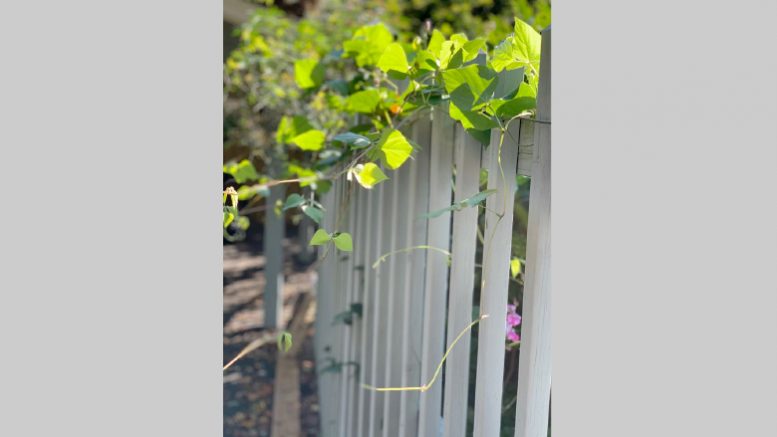 When I moved to North Carolina from New York in 1992, I knew very little about gardening. Gardening to me meant hiring someone to mow the lawn while I place geraniums in a planter.

As I have mentioned previously, the yard was overrun with trees that were either unattractive or in ill health. Within ten years a major transformation took place and Organized Chaos, the name I give to my garden, came into its own.

In the beginning, there were no deer. I realize that this is equivalent to telling my grandchildren that once upon a time there were no cell phones. They stare at me in disbelief while I can barely remember when I could plant anything without accounting for the deer. However, such a utopia did exist. I had the requisite rose garden, put off to one sunny side of the garden, so that the copious chemical spraying wouldn’t drench the rest of the garden.

I discovered the joys of daylilies early on: Because I had lots of garden space to fill, I bought lots and lots of daylilies. I added gardenias, camellias and even joyfully included hellebores — the thought of winter flowers enchanted me. Little did I know that hellebores, if happy, multiply through indiscriminate seeding.

And then the deer came, and they were extraordinarily fearless. Nothing scared them.

Suddenly the hybrid teas no longer produced blooms. The daylilies turned from confident, in-your-face plants into shrinking violets. Slowly it dawned on me that I was experiencing the gardener’s ultimate nightmare: deer were demolishing my garden.

Consequently, my garden became an anti-deer garden. I thought in terms of ornamental grasses, hellebores and amsonias. Daylily season was exhausting as I did nothing but spray, spray, spray, all to little avail. I switched sprays, I put obstacles in front of my prized daylilies, I even resorted to covering some with netting. Still the deer came.

My garden was filled with repetitious boredom. The hellebores seeded in so they became one continuous groundcover — and hellebores make an ugly groundcover in my opinion. The euphorbias ran into the hellebores, seeding everywhere. Gradually I found that my garden consisted of ornamental grasses, hellebores and euphorbias, which you will agree added up to tedium in the garden.

I then turned to spiky plants. Agaves and yuccas captured my attention, although my Agave americana gave up the ghost during a particularly wet winter. Gradually it became a garden where one had to tread lightly as a fall could be devastating: Agaves and yuccas are uncomfortably sharp.

I added palms. The windmill palms (Trachycarpus fortune) did well, adding some interest to the garden. The hardiest palm, the needle palm, looked nice but needed ten years to reach a decent size; this is a palm that seemingly grows by inches in a decade.

I added some Sabal minors — I was on a palm roll. What did I discover about palms? Too many palms are a trifle boring and a garden can only incorporate so many palms. The fetching Mediterranean fan palm tried to make it through a harsh winter before finally succumbing.

So, there I was with my spiky garden, with over-sprayed daylilies, roses that existed only to feed hungry deer, with hellebores and euphorbias running amok.

Suddenly I cried, “Enough!” I called up my builder, telling him that not only did I need a fence, I needed it yesterday. I tore out all the hybrid teas, laboriously dug up the deeply rooted hellebores, pulled out the euphorbias and started anew.

Suddenly the garden world opened up. Lilies beckoned. I spread sustainable roses throughout the garden. The quivering daylilies breathed a sigh of relief and started to grow. I planted the ultimate deer food, hostas, in lovely semi-shady areas.

I realized that the addition of the fence created a condition of the past that many of us had forgotten: Once upon a time we actually gardened without the threat of deer.

A Plea for Contrast

Be the first to comment on "The Story of a Fence"