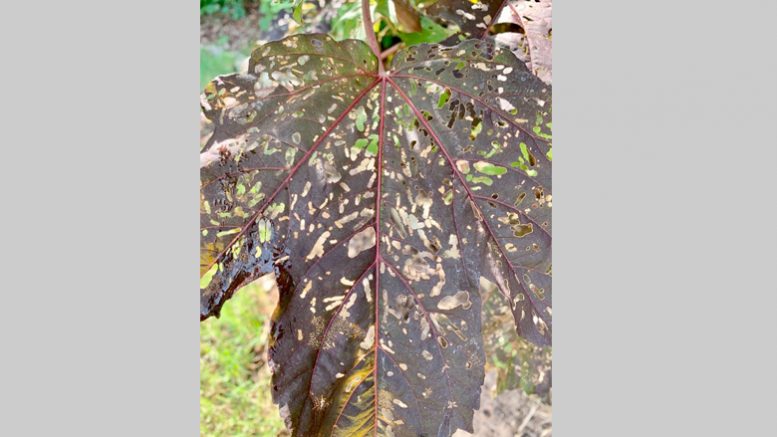 Last week I introduced you to my neighborhood’s Japanese beetle (Popillia japonica) conundrum: choose between synthetic or organic treatments for controlling them and be ready to accept the consequences.

I staked out my position — I’m willing to accept some damage because of the long-term impact to my soil and the food web.

Around here, the beetles have harmed several of my perennial plants, skeletonizing their leaves but not killing them. They gobbled up the leaves of my Peggy Martin rose so she now looks rather shabby. But she continues to grow vigorously and I’m content enough.

Given the consequences of using either the synthetic chemical Sevin or the organic treatment Bacillus thuringiensus (Bt), I had decided to live with the Japanese beetles in my garden — they hadn’t done enough damage for me to justify retaliation, at least not yet.

That’s how I see it in my garden, but you might assess the situation in your garden and come to a different conclusion. Herein lies the beauty of gardening: our creations reflect our personal outlook.

While I’m ready to tolerate non-lethal insect damage, I’m of another mind when it comes to insects assassinating my older garden residents.

Three years ago, bagworms (Thyrirlopteryx ephemeraeformis) killed off a good-size arborvitae at the corner of our house. While they will feed on several different trees, they are fond of conifers and arborvitae are especially susceptible. I tried everything short of a full-scale chemical assault, but after they defoliated half of the tree, I gave up and had it removed.

Since then I’ve successfully kept the bagworms away from my remaining arborvitae, but, alas, now my luck has run out and they are back. I’m hand-picking the bags as quickly as I can but I fear we will suffer a defeating blow.

As with the Japanese beetles tormenting my neighbors, Bacillus thuringiensus is recommended for controlling bagworms. The idea is the same: break their lifecycle. The consequences are the same. Bt doesn’t discriminate; it will reduce the caterpillar population and leave me feeling guilty for depriving the birds of the caterpillars to feed their chicks.

This time I’ve decided to give the bagworms a good fight by applying Bt to the soil surrounding my endangered arborvitae. As it takes time for Bt to become effective, the bagworms will likely win and I’ll end up with another dead tree. When I write a big check to have the tree removed, I’ll be able to console myself that I did everything I could to prevent its demise. Well, almost everything.

I could have applied Sevin to the foliage to kill off the worms as they made their way up the branches. Once they’ve formed their protective bags, sprays, unable to penetrate, are rendered ineffective.

Sadly, it’s hard to spot the worms before they form their bags. The best I could have done was to keep close watch and attacked when I spotted the first bag, assuming other worms were marching up the branches in the wake of their leader. There’s also a lesson here about using garden records to anticipate this problem, but we’ll save that discussion for another time.

Since I know my actions could impact the birds visiting our property, I’m adding other features that could help them — a birdbath and another feeder. It’s my version of purchasing carbon offsets: do some good to make up for doing some bad.

Our gardens are more than just pretty places. They connect to the wider world, impacting creatures in the soil to the sky.  We are part of this connection and our choices matter, so let’s do our homework before reaching for the chemicals.

Remembrance of Plants Past

Be the first to comment on "The Trades We Make"