The big tree leaned over quietly into the lake as if lying down to take a nap. The thick trunk curved up over the water, half the wide crown submerged, the other half, green and full, as if growing in the lake, leaves gently moving in the breeze. It was a lovely new focal point from our back deck at the far end of mile-long Eastwood Lake.

But the sleeping tree blocked our next-door neighbor’s more limited view from the side of the lake. They went to talk to their next-door neighbor whose tree it was. She said her view was not impeded. She declared that it was the Lake Forest Association’s problem now that the tree is more in the lake than in her yard.

Our grandchildren and I swam out to explore. The big root ball was only partially exposed, so the tree was still alive, and smelled like we’d buried ourselves in a deep green salad.

Intrepid 8-year-old Poppy clambered out the trunk and cannonballed off with a big splash. Her 7-year-old brother, Baldwin, preferred paddling around the perimeter, through the branches and under the trunk bridge in his little blue kayak.

A few days later a young man with a chain saw arrived and cut off some of the bigger branches and pulled them away. He came back three times until only the bow of the trunk remained. Nothing more was done. Our daughter, Lilli, posed for a photograph seated atop the horizontal remnant of the tree.

The trunk has become a fixture in our lake view. As we approach the second anniversary of our COVID home-boundedness, we appreciate having something new to observe in our slowed-down lives.

Last summer, big turtles climbed up as far as they could to bask in the sun. The surrounding trees, still securely fastened, turned brilliant hues in the background of the mirrored image of the trunk’s curve.

This winter the Belted Kingfisher swallowed his prey from atop the trunk. A migrating Cormorant dried his wings on the high perch after a morning of underwater fishing until the resident Great Blue Heron asserted his property rights.

Bald eagles surveyed the lake from a branch in the tall Sycamore tree overhead. The human fishers also appreciate the underwater limbs that attract the largemouth bass. We anticipate that woodpeckers soon will find the decaying hulk appealing as well.

We’re glad our neighbor didn’t finish the job of hauling off the tree. The lake has decided where the tree needs to be. Let nature take her course. We get to witness the beauty of that process.

Some of the limbs are removed and hauled away from the newly fallen tree in Eastwood Lake. 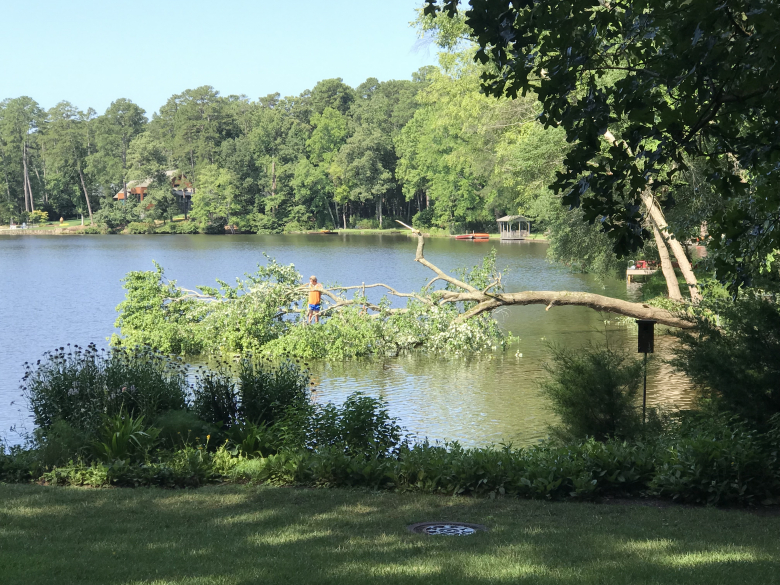 Why No Pavilion for the Chapel Hill Farmers’ Market?

2 Comments on "The Tree in the Lake"