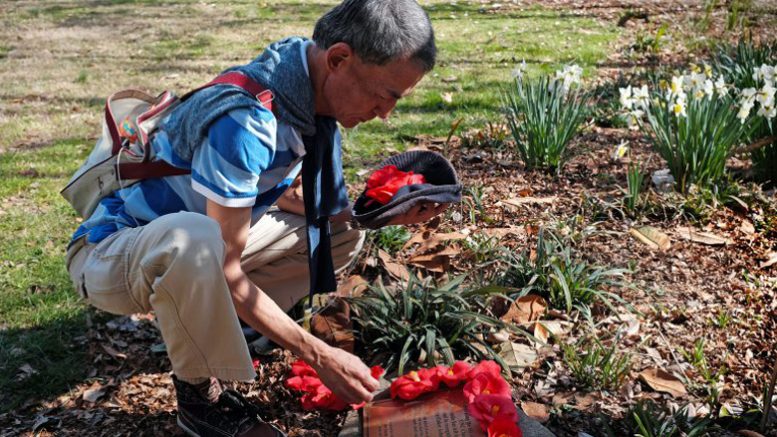 Perhaps you’ve seen him on campus.

Or more likely, heard him.

His high piercing whistle mysteriously blending with the songs of the mockingbird, the song sparrow.

Especially deep in the woody glen of the Coker Arboretum, where you might see him, beneath some magnificent maple, arms extended upward, in tribute.

Who is this little whistling man?

I asked my class. One, a student reporter, told me she had heard his story. That he was formerly a Chinese opera singer, but had lost his ability to sing, and so he adapted to his handicap by listening to tapes of Chinese opera and whistling those melodies.

Is this the true story? I cannot corroborate that narrative.

What I can tell you is this true story.

After the 2008 murder of student body president Eve Carson, I was so moved that I launched the Durham VOICE, a community newspaper on the home turf in inner-city Durham where the two murderers came from. Critical to the success of the paper has been our mentoring program in which students from UNC and NCCU model for local teens of color who are socially vulnerable — a project, perhaps nothing more than a pebble at the edge of a vast ocean, that attempts to help interdict the school-to-prison pipeline.

Even though I never met Eve Carson, I have always honored her as the founding inspiration for the VOICE, and as such, make a point of visiting her memorials around campus on a regular basis.

One such memorial hides quietly beneath a Sweet Breath of Spring bush, tucked away in a secluded corner of “the Arb.”

On my occasional visits, I began noticing that there would always be fresh flowers, perhaps camellias, arranged artfully around the edges of the stone marker to Eve. And for years I wondered, who was the faithful flower-bearer?

One day two years ago, on one of my regular pilgrimages to Eve’s marker in the arboretum, as I approached the memorial, I spied the little whistling man walking across the lawn, headed directly towards Eve’s marker, flowers in hand.

We met face to face in front of the memorial at exactly the same time.

“You,” he responded, “You are the newspaper man,” bending to place the flowers on Eve’s marker.

Jock Lauterer is retired founding director of the Carolina Community Media Project and an adjunct professor at UNC-Chapel Hill’s School of Journalism and Mass Communication, where he teaches community journalism.

Who is Running for Office in the 2021 Election?

Be the first to comment on "The Whistling Man"