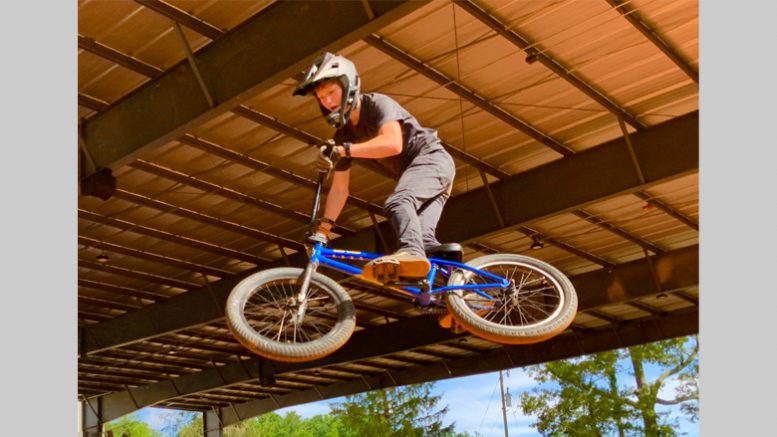 I didn’t ride BMX bikes when I was a kid, but plenty of kids I knew did.  There was even a (sort of) hit BMX movie in 1986, “Rad,” which included a very young Lori Loughlin and plenty of awesome biking sequences.

As regular readers of this column know, my version of the sport started in road bikes and I quickly jumped on the mountain biking wave where I’m still lucky to be riding today. However, I have a teenager who not only likes various versions of mountain biking but also spends enormous amounts of time on his BMX bike.

For readers who don’t live and breathe bicycles, a BMX bike is a single-speed, 20-inch wheel small bike with a seat as low as it can go and an optional brake. Starting out as an accessible kids’ bike, these bikes were one of several precursors to larger 26-inch wheel geared mountain bikes and are usually used in three settings.

Often at a skate park, they compete with skateboards for tricks and airtime over the jumps and bowls, while other riders ride “street” and find natural obstacles in the urban environment.  Finally, there is a flourishing league of dirt tracks where lightweight carbon versions of these bikes are raced in large groups in a spectacle somewhat resembling an early NASCAR race without V8 assistance.

The passions of our kids often provide an education for those of us in the older generation, and that has certainly been the case for me and the BMX world. On the whole I’ve come away with a pretty positive impression.

First of all, riding any bike means spending plenty of time outside and that’s great for any kid as far as I’m concerned. In addition, there is a laudable culture in BMX of older riders helping out the younger crowd. This extends to the professionals on the scene.

My son has been given advice and taught riding skills by a world champion rider who happens to live in the Raleigh area and a nationally known professional BMX rider who lives in Durham. And as my son has gotten older and more skilled, he’s often been the one giving out advice to younger riders himself.

Finally, as in many sports, riding BMX at a high level requires patience, perseverance and commitment. Learning that jump or trick means practicing again and again and again until you finally get it right, and you will likely have to pick yourself up after some bumps and falls along the way. The desire to do this needs to come from inside and isn’t something that’s readily coached or taught. In short, you are learning many things in life that are exciting and worth doing take hard work, long hours and real effort. And this is a lesson that everyone can benefit from, whatever your passion.

Of course, there are downsides to any sport and BMX is no exception.  There’s a “bad kid” reputation, mostly unearned, that parallels skateboarding culture. I think this is overblown, although in any public venue like a skate park there are sometimes going to be some older teens and young adults around who any parent is not going to be too excited about.

When my son was younger I spent plenty of time hanging out with him at the skate park as I would have at any public place, so while I might have frozen solid in the winter a few times, I was able to keep an eye on him. There’s also lots of opportunity for getting banged up as you jump and spin, like in any more extreme sport. The author supervising riding at the skate park in winter while failing to stay warm and get some work done.

The skate park is a pretty safe venue where you usually slide when you fall, but I don’t think teenagers are ever going to give up seeing how high they can bounce, so making sure a solid, quality BMX-specific helmet is always worn is an absolute essential.

And as in so many areas like this these days, video documentation of the latest trick can be fun, but also an impetus for a rider doing sillier things. It’s important to understand that many of the people making a living from riding these days get to that august level not through racing but from exposure on social media sites. This is hard to contend with for the aspiring younger riders, but keeping the focus on fun rather than getting the latest video hit should be the goal.

You won’t find me on a BMX bike, but I’m glad to see so many kids out riding them these days. The bike-handling skills they pick up translate easily to make much better mountain and road bike riders, and the fitness gained from pedaling a one-speed BMX bike up Martin Luther King Boulevard to Franklin Street is significant.

Chapel Hill has a great skate park over in Homestead Park and — this is a secret — UNC’s campus has been known to have a few stairs and ledges that some anonymous riders have been seen riding over and around, especially during this low-pedestrian density year of pandemic.

Who knows, I’ll probably be recruiting some of these kids for our middle school mountain bike team once we all get back to normal.  In the meantime, let’s go riding.