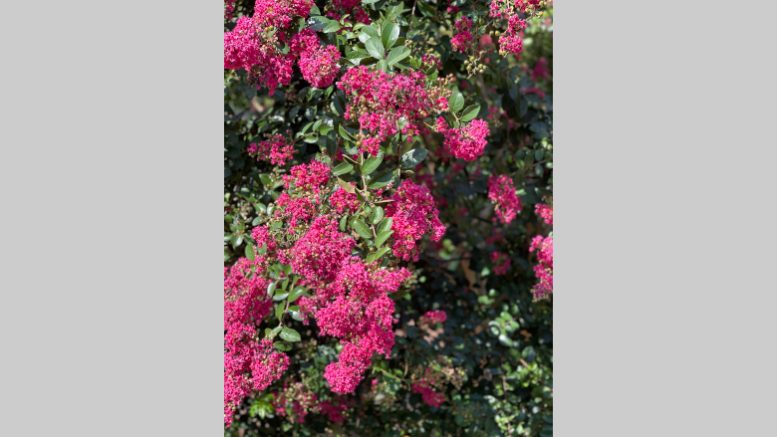 July is the month when my attention turns to crapemyrtles. These sun-loving trees manage to put forth a stream of long-lasting blooms, no matter how hot and humid the weather is.

There is a lot of misunderstanding about the crapemyrtle – including its name. Sometimes you see it as “crape myrtle” or even “crepe myrtle.” Michael Dirr, Professor of Horticulture at the University of Georgia, has decided it should be “crapemyrtle” as it isn’t a true myrtle at all.

Americans imported Lagerstroemia indica over 200 years ago from England where it had refused to flower due to a lack of sun. Native to Southeast Asia, it thrived here, soon becoming the most popular tree in the South despite its one major failing: It was highly susceptible to powdery mildew.

Now the genus Lagerstroemia contains many species but, for the Southeast, the two most important are L. indica and L. fauriei. In the 1950s, North Carolina State University received the seeds of the Japanese crapemyrtle, L. fauriei. The resulting trees took hold, manifesting a wonderful exfoliating bark. Although its flowers had a shorter bloom time, it demonstrated greater resistance to powdery mildew and greater cold hardiness, making it suitable for the North Carolina mountains.

A marriage occurred between L. indica and L. fauriei – in fact, a lot of breedings took place with the resulting hybrids bearing Native American names, such as ‘Natchez’ and ‘Tonto.’ Today, there is a huge number of cultivars, all differing in height and color — some even bear black leaves. Michael Dirr’s introduction of the Enduring Summer series includes specimens that rebloom. There truly is a crapemyrtle for everyone.

However, most of the crapemyrtles are badly situated. This is a specimen tree, one that should be observed from all four sides. Please do not plant them under telephone and electrical wires as the crapemyrtles will soon try to overlap the wires. Do not try to scrunch them into the median between the sidewalk and the street as a crunched crapemyrtle lacks curb appeal. Do not site them against anything, whether it’s a house, wall or another tree. It needs a sunny spot, planted alone so that it’s able to show off.

Provided you plant them in full sun, you will find that crapemyrtles are worthy specimen trees throughout the year. Not only is their shape pleasing, with a full head of leaves, their blooms are profuse. Once the leaves fall in autumn, the wonderful smooth bark is on full display, adding greatly to winter interest.

When choosing a crapemyrtle, you must consider size. ‘Natchez’ will reach a size of 30 feet whereas ‘Tonto’ is considerably smaller with a height of 15 feet. There are even shrub crapemyrtles although I have found their bloom period to be on the short side. Essentially, you will choose among the miniature, dwarf, intermediate and tall varieties. There really is an appropriate crapemyrtle for all, provided you do your research ahead of time.

Color is a major consideration as the flowers range from white to red with a lot of variation in between. Shape is another aspect to keep in mind as some have an upright vase silhouette while others are more rounded.

Much has been written about “crape murder,” the practice of severely cutting back the tree in the beginning of winter, giving it a leprous look. Not only does the resulting mutilated shape detract from the winter interest the bark provides, it also weakens the tree. The thin sprigs that grow out will give the tree an unattractive lollipop shape that I personally find distasteful. My plea to you is this: Please do not commit crape murder.

Now this doesn’t mean that you shouldn’t prune your beautifully situated crapemyrtle. You should limb it up, thereby exposing the trunks and improving the shape overall. As I say rather theatrically: “Off with their bloomers!” — and that applies to all suckers growing at the bottom. In the spring before the leaves appear, look at it critically. Cut off any crossing branches or any thin branches — and don’t cut them halfway. Cut them back to where they branch off.

Hideously pruned crapemyrtles develop huge gnarls supporting thin twigs in the spring. When I see these misshapen, abused trees, I often think of Niobe who still weeps for her seven sons and seven daughters even though she’s been transformed into stone. Yes, I’m being melodramatic but this demonstrates the difference between a perfectly situated crapemyrtle in its full glory — and one that has been mutilated.

Yes, There are Plants We Cannot Grow

Be the first to comment on "The Wonders of Crapemyrtle"