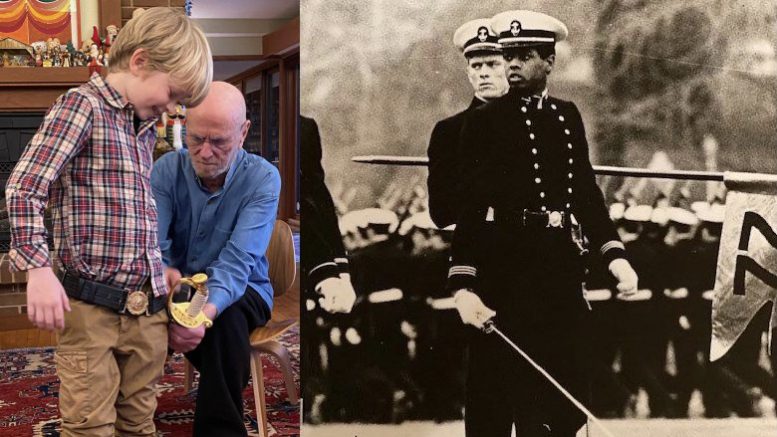 I’ve never thought much about Veterans Day. But in recent years, our grandchildren have called my husband, Jim Protzman, to wish him well. They’ve seen his sword from his days as a United States Navy officer and think that’s special.

My husband doesn’t remember his time in the Navy as the best years of his life. He has nightmares about Plebe year at Annapolis (U.S. Naval Academy). But he still credits the Navy with giving him an education he couldn’t afford otherwise. He learned leadership and discipline, as well as a respect for order. All that set him up to be the successful businessman he is.

While Jim was in the Navy, I was at the University of Kentucky protesting the Vietnam War, attending the rallies in Washington, glad my brother had not passed the physical to be drafted.

Even though I’m glad Jim and others in my extended family have benefitted from what they learned in the military, I wish our country didn’t need such a preoccupation with war. I’m still a peacenik at heart.

I also think of all the harm our military—as an institution charged with the implementation of U.S. government foreign policy—has wrought in other countries. How we have frequently misused our power and in the process left others worse off. How so many of our young people have died for unjust causes, and others have come home suffering over what they were ordered to do, some permanently damaged mentally or physically.

Nonetheless, I believe that every person who has served in the military deserves our gratitude. They have all made personal sacrifices, no matter the benefits they may accrue. Many are lucky they didn’t have to go to war, but they still were willing to devote years of their lives to our common good. Such sacrifice deserves our thanks and a day to acknowledge it.

Our family’s newest veteran is nephew Reilly Protzman, who joined the Navy after college as a way to get a focus in his life. I asked him recently about those four years. He said he got to “see the world” as the recruiting advertisements promised. His stints on the aircraft carrier USS Carl Vinson took him from San Diego to the coast of Iraq, with shore stops in Singapore, Abu Dhabi, Bahrain and Dubai.

Reilly said his experience on board was similar to what we saw recently in the new Top Gun movie as jets landed and took off from the deck of that floating city of 4,500 people. His squadron loaded more than 200,000 pounds of bombs onto jet fighters flying into Iraq.

He said he worried about where all those bombs landed, about the people he never saw.

Reilly said it was hard and dangerous work, but that overall, the experience was worth it. “I thought I was grown up, but I learned so much about different cultures, different ways of life. I learned the importance of organization and about the processes necessary to get big projects done.” Reilly used his GI benefits to get a master’s degree in natural resources at North Carolina State University and is now managing large commercial landscaping accounts in the Triangle. The discipline he learned in the Navy has served him well.

If you know veterans, you may want to ask them about their experiences instead of simply saying “thank you for your service.” I find that overused expression may actually keep them from telling you more deeply about their life in the military. And if they decline to tell you—as  many combat veterans do, preferring to speak of their experiences only with others who have shared them, and sometimes not at all—respect that choice with your thanks.

If you want to be more public about your acknowledgement, you could attend Orange County’s Veterans Day celebration at Southern Human Services Campus (2501 Homestead Drive in Chapel Hill) at 11 a.m. Friday, Nov. 11.

Jane D. Brown taught in the UNC Hussman School of Journalism and Media for 35 years and has lived in Chapel Hill since 1977.

Re-Educate About Recycling in Honor of Fathers

4 Comments on "Thinking About Veterans Day"