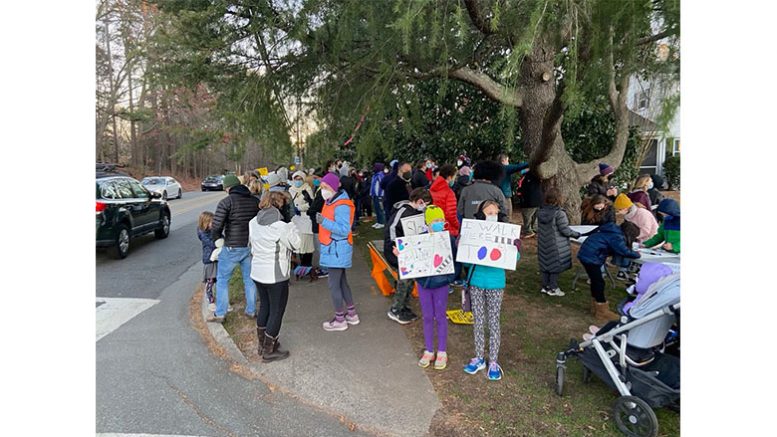 Chapel Hill residents at a Jan. 7 “Walk to Slow Traffic on Estes Drive” held a week after two teens were struck by a vehicle while crossing the road.

Together the two accidents have brought the safety of pedestrians and cyclists to the fore at a time when Chapel Hill is in the midst of a development boom that will significantly increase both vehicle and foot traffic around the town.

On Friday, December 31, at about 5:30 p.m., Norma Martin, 69, of Durham, who was driving an SUV, struck two children, ages 13 and 14, as they used a marked crosswalk to walk south across Estes Drive toward Caswell Road near the entrance to Guy B. Phillips Middle School.

The Chapel Hill Police Department investigation found that the victims entered the marked crosswalk after westbound drivers yielded to them. Martin, who was driving east toward Franklin Street, did not yield and struck the victims. Martin stayed at the scene after the crash. She has been charged with failure to yield to pedestrians in a clearly marked crosswalk or regular pedestrian crossing. The stretch of Estes Drive where the children were struck is under the jurisdiction of the state Department of Transportation.

In the other incident Chapel Hill Police charged a driver involved in a crash that injured a pedestrian at Martin Luther King Jr. Boulevard and Estes Drive the morning of Tuesday January 11.

Chapel Hill Town Council member Adam Searing told TLR in advance of a Jan. 12 council meeting, “although pedestrian safety is not on the official agenda for this evening’s meeting, given the two incidents of pedestrians getting injured I, and I am sure others, will want to talk about this tonight. I attended the [Jan. 7] Estes neighborhood march for safety last Friday evening and spoke to several folks there about their concerns. One parent asked me about doing an evaluation of crosswalk safety near all our schools. I think that is an excellent idea.”

Searing explained further that, “a separate bike/pedestrian path and improvements along Estes are needed and they have been approved and funded; construction started before the new year. However, these improvements were delayed again because of what I understand as an issue with location of a natural-gas line. I would like to see construction start as soon as possible, especially after these recent injuries to our pedestrians. As a life-long cyclist I believe that separating cars, bicyclists, and pedestrian traffic with completely separate multi-use paths and greenways is the best way to improve safety.”

More broadly Searing added that “these pedestrian injuries should make clear to all of us that the costs of runaway development need to be considered on the whole town and not just project by project. We currently have 30-40 proposed new developments right now in Chapel Hill – and many of them quite large, with hundreds of units. Each of those projects will affect traffic around it but, as a whole, the breakneck pace of current development in town will likely have a much greater overall effect. We need to consider and plan town-wide rather than just with each development.”

The struggle to manage the growing volumes of vehicles, pedestrians, and bicycles that use the town’s roads is not new. The Central West Small Area Plan, prepared for the town by consultancy Rhodeside & Harwell Vanasse Hangen Brustlin in November 2013, specifically cited Estes Drive for “perceived lack of safety, traffic congestion at peak hours, and lack of basic bicycle and pedestrian amenities.” That situation “became a major focus and driving force” underlying the development of the plan.

“Martin Luther King, Jr. Boulevard and Estes Drive are unfriendly to pedestrians and bicyclists,” the plan stated. “They have discontinuous and/or absent sidewalks and crosswalks, lack of bike lanes, and allow for the rapid movement of vehicles causing the area to feel unsafe and unwelcoming to those choosing alternative modes of transportation.”

The plan made several recommendations for the town, the first of which was “work with the Chapel Hill-Carrboro City Schools, including parents and administrators, to consider road crossing improvements at the intersection of the schools and Estes Drive.”

-Implement crosswalk improvements throughout the entire area,
with particular attention being paid to intersections and bus stops;

-Have town staff investigate the appropriate location of a traffic circle or light;

-Defining important bicycle and pedestrian crossing locations, and increasing the visibility of pedestrians and bicyclists;

-Having conversations with the North Carolina Department of Transportation about lowering the speed on Estes Drive.

Inquiries were made on Tuesday the 11th to town officials about pedestrian safety measures taken in the wake of the accidents, and also about the status of the Central West Small Area Plan findings and recommendations. Town officials indicated that responses would be sent, but none had been received by 5:00 pm Friday.