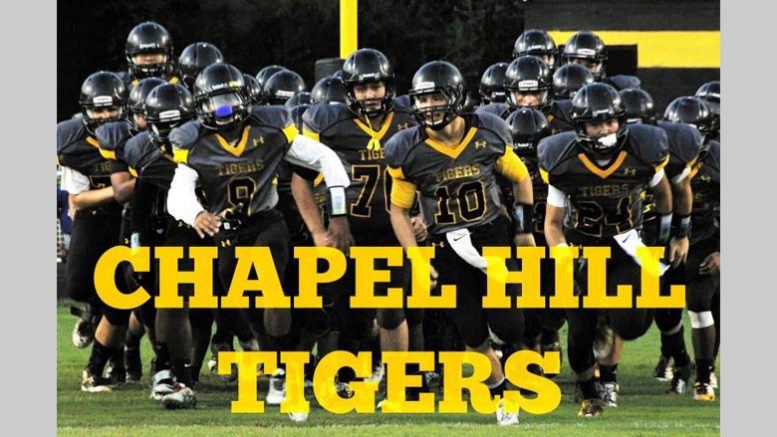 Since reaching the 2014 Eastern Regional final, Chapel Hill has won just 10 varsity games. And now, the team doesn’t know when it will next be playing. Ordinarily, Marsh would be spending this week huddling with his staff for the first round of scrimmages for the Tigers. Next week would have been the season opener against Riverside at Culton-Peerman Stadium.

Now with the COVID-19 pandemic keeping North Carolina high school sports suspended indefinitely, Marsh and his team are left waiting to see what happens next.

But instead of looking at the pandemic as a negative, Marsh believes it could help his team. Last year, the Tigers started rising junior Caleb Kelley at quarterback on a painfully young squad that finished 1-10, with only two seniors listed on the roster.

Now “we return a wealth of talent on both sides of the ball,” Marsh said. “We’re senior-heavy. Our guys endured not having a varsity season. Then we had a varsity season last year and didn’t do as well as expected. Now that we’re older, we’ve gotten stronger in the offseason.”

There has also been an influx of transfers. Ben Yates, a middle linebacker who played at Charlottesville High School in Virginia last season, is expected to suit up for the Tigers. There’s also 6-1 cornerback Kaire Ryland, a junior who was a regular on Riverside’s 8-4 squad in 2019.

Only four years later, Marsh didn’t have enough players to field a team, a fate that crosstown rival East Chapel Hill suffered a year prior. Marsh, who prides himself on teaching just as much as winning, had to field a junior varsity team as the program found itself hitting the reset button.

Whenever the season does start, Marsh will have a team that finds itself with something to prove. Last year was the first time in his coaching career that Chapel Hill finished without a Big 8 Conference win. And last winter, every time Marsh walked into his office outside the school weight room, there was a familiar silver trophy conspicuous by its absence.

It was the Hodgin Cup, the trophy awarded annually to the winner of the Chapel Hill-East Chapel Hill game. Entering 2019, Marsh had gone 14-0 against East. The cup had been a mainstay inside Chapel Hill for so long, some students probably mistook it as a permanent piece of school property. Essentially it was.

The Wildcats defeated the Tigers 32-27 at Culton-Peerman Stadium, its first win over the Tigers since 2003.

The goals of Chapel Hill’s next season have been crystal clear for quite some time. For now, Marsh just wants to have a season.

“In the grand scheme of things, it’s not too big of a problem,” Marsh said. “I’m holding true to my faith. The safety of our players takes precedence over anything. If it’s the Lord’s will, we’ll be able to play.”

A Field of Dreams, Not Games

Be the first to comment on "Tigers Wait, with High Hopes"