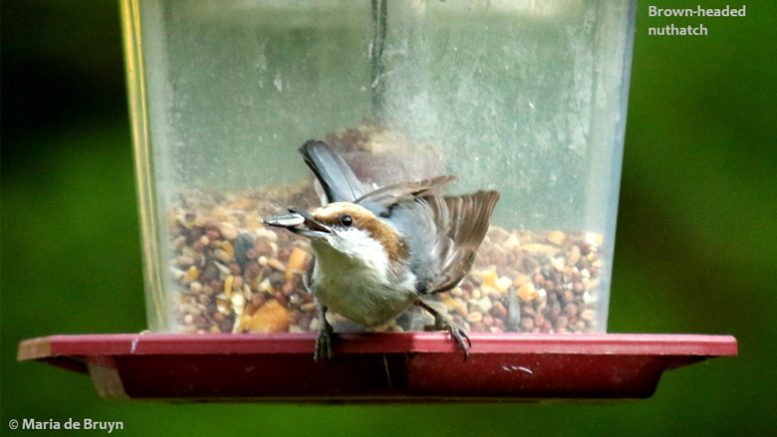 During our recent, brief snowfall, many bird lovers made sure to replenish food supplies for our feathered friends. As temperatures fall below freezing and grass and tree limbs are covered with snow, it becomes difficult for the birds to find insects and glean seeds and berries. Giving them extra food can increase their survival rates, both in winter and other weather conditions. Still, some people question whether we should feed birds in our yards due to fears that supplemental feeding will hurt them in some way; for example, because feeders near buildings cause more birds to fly into windows or because songbirds at feeders are easier targets for predators such as hawks. Ornithological organizations now agree that the benefits of feeding birds can outweigh the drawbacks. Recent research showed that we now have almost 30 percent fewer birds in North America than in 1970, including many of the smaller birds we were used to seeing, such as sparrows, warblers and finches.

The declines are mostly due to human-caused factors. Birds (and other animals) are losing habitats such as shorelines, grasslands, meadows and forests due to construction, mining, certain types of agriculture, etc.  When people put invasive exotic plants in their yards, native plants decline so that birds find fewer foods needed for survival (especially native seeds, caterpillars and full-grown insects.) Use of pesticides and herbicides affects insect and vegetative food sources as well. Climate change is further having an effect on avian feeding patterns.

We are witnessing rapidly increasing loss of wildlife habitats and insufficient measures to address this. So feeding birds is beneficial as long as we keep important points in mind.

Certain bird species should not be fed, including predators such as hawks, owls and eagles, since this can endanger them. We may have grown up thinking it’s fine to feed bread and crackers to water birds, such as Canada geese and ducks, but this is actually harmful because it can cause a disfiguring and potentially fatal condition called “angel wing.” We can put inconspicuous (to us) decals on windows to prevent birds from flying into them. Placing feeders at a distance from buildings and/or close to bushes and shrubs can give smaller birds a quick hiding place when predators arrive. Using baffles on feeder poles placed at least 10 feet from large branches and roofs also can deter squirrels and raccoons from gobbling up the available bird food.

If you are going to feed birds, also plan for time to clean feeders regularly so that viruses and mites that cause diseases are not spread so easily from one bird to another. Various websites offer other tips, such as types of food to put out, types of feeders to use and ways to offer water sources.

So, to answer the question in the title of this column: no, whether or not to feed birds is not the question. Rather we should ask: how can we best feed birds in our yards to contribute to their well-being?

And let’s not forget that feeding birds can also contribute to our children’s and our own well-being with increased knowledge about nature, interaction with the natural environment and, perhaps, ultimately more advocacy for environmental protection. Consequences of Yet Another Dense Apartment Development

Be the first to comment on "To feed or not to feed — is that the question?"