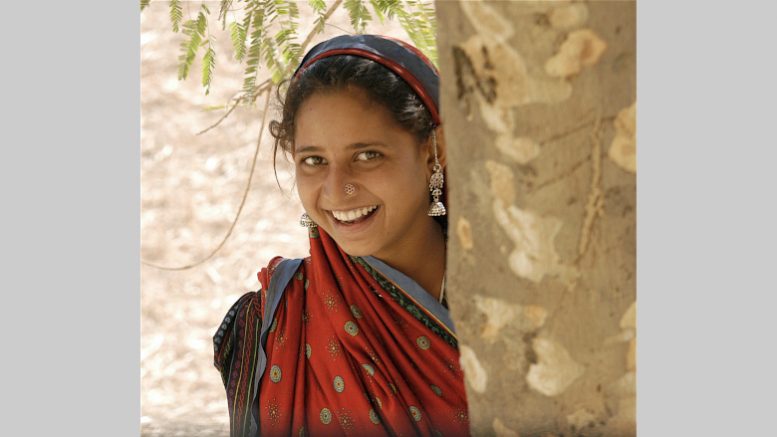 As the pandemic rages across India, I find myself worrying about a perfect stranger. Her name, where she lives, her situation in life now — of these facts I am totally ignorant.

But still, I feel as if I know this Rajasthani teen, frozen in time, resplendent in her colorful sari, nose ring, bangles and beads, with a radiant smile touching me deeply across time and space.

My rant two weeks ago in this space about “parachute journalism” conjured up this photograph that has haunted me for 15 years.

In 1998, while serving as an associate professor of photojournalism at Penn State, I was honored by National Geographic magazine as that summer’s faculty fellow. The once-in-a-lifetime opportunity gave me open access to study all facets of the magazine’s vast photographic efforts in their downtown D.C. headquarters.

As you can imagine, for any photographer this was like hanging out with the gods on Mount Olympus. They were — and are still — my heroes: Annie Griffiths-Belt, David Alan Harvey, Jodi Cobb, Emory Kristoff, Joel Sartore, Michael “Nick” Nichols, David Doubilet, Mark Thiessen, Sam Abell, James L. Stanfield — and above all, Penn State’s own Steve McCurry.

If you don’t recall his name, you will surely recognize his work; in 1984, McCurry made the single-most- iconic and memorable cover photograph of the magazine’s entire history — the 12-year-old Afghan refugee girl, with her ragged yet somehow elegant dusty rose robe and her soul-searing flashlight-green eyes. You remember the photograph, don’t you?

These unfailingly good folks at Nat Geo took me to lunch, told me their war stories, complained about their busted marriages, dragged me around town on local photo shoots as their go-fer. I was in photo-heaven.

Once, while I was hanging out with McCurry in the photo office, this world-renowned photographer confessed candidly how it dogged him that he had failed to get the Afghan girl’s identity.

Readers of Nat Geo will remember how, in 2002, the magazine sent McCurry and a team back to Southeast Asia where, after an extensive search, they found the “Afghan Girl.” Sharbat Gula, 49, the widowed mother of three girls, now lives in Kabul in a house given to her in 2017 by the government. For McCurry, the find represented the end of a quest, while mine still remains a mystery.

Fast forward eight years to 2006, when my wife, Lynne, was sent by the board of Child Fund International on a site visit to India. Lucky me, I got to tag along, serving as the photographer for the worldwide relief NGO.

In addition to visually documenting that experience, I had made a secret vow to myself: to bring back an image — just one single frame — a solitary photograph that I could show to Steve McCurry and, if not be proud, at least not be embarrassed by my effort.

My chance presented itself as do most great opportunities for photographers — when I least expected it. Our CFI team of observers had journeyed deep into western India, to the remote desert state of Rajasthan, over rutted roads in SUVs where tourists rarely ventured, through crowded shabby villages with narrow unpaved streets past women in fabulously colored saris carrying immense water jugs on their heads or toting enormous bundles of kindling wood for their cooking fires.

In one village, I don’t even know its name, the proud village elders hosted our team in the community house and, as is the custom, all were seated cross-legged on the floor of a semi-dark room, the only light coming through several open, screenless windows. Beside one of those windows, I stationed myself to document the scene.

What a serendipitous positioning that turned out to be. For suddenly, outside that window, I spotted a girl, peeking out from behind a tree, as if she had never seen the likes of this tall, bald white man draped with cameras. I imagine I must have appeared as exotic to her as she did to me.

But how to get the photograph of such a shy creature in such a fleeting moment?

The technical challenges alone were daunting. First, for you reader/photographers, a word about my gear: a Nikon D-100, which was an early high-quality “pro-sumer” camera body, equipped with a versatile 35-105 mm lens, which allowed me to shift quickly from a wide-angle to telephoto close-ups.

Then, there were the light challenges: The only available light illuminating the meeting room came from two open windows. So, for my inside exposure, I was shooting at a relatively slow shutter speed of 1/60th of a second and a wide aperture of f/ 2.8.

But this exposure would never work for the bright light outside the window. Further, because the girl behind the tree was fully 20 feet away, I knew I would have to make full use of the zoom lens’ telephoto capabilities.

So, I preset the camera for a faster shutter speed of 1/250th of a second to account for potential “camera shake” caused by my movement — and I “guesstimated” an aperture of f/11 to adjust for the bright outside light.

Then, I held my camera up to my face while semi-facing into the room as if I were still taking photos of the elders. But what I was really concentrating on, out of the corner of my right eye, was … the girl behind the tree.

Then, there she was again!

My heart leapt. Holding my breath, I swiveled quickly but fluidly so as to not alarm her with a jerky movement, quickly framing the shot and silently praying that the gods of auto-focus were smiling down on me. Without fully seeing what I was actually photographing, I pressed the shutter release button.

But in that twinkling of another fraction of a second, her smile had vanished — and by the third click, so had my lovely subject entirely.

The meeting with the village elders over, we were whisked away from that dusty rural village in our SUVs, bound for the next stop. And the next. Only when I returned later that evening to our hotel in Udaipur would I really get to examine the “grab shot” of the lovely Rajasthani teenager, just one of hundreds of images I had shot that busy day.

Only then did I realize what I had. And what I had not.

Now, all these years later, as the pandemic rages across India, I find myself worrying about a perfect stranger. Her name, where she lives, her situation in life — of these facts I am totally ignorant.

But still, I feel as if I know this Rajasthani girl, frozen in time, resplendent in her colorful sari, nose ring, bangles and beads, with her radiant smile touching me deeply across time and space.

For more on Steve McCurry and “Afghan Girl,” go to:
https://en.wikipedia.org/wiki/Afghan_Girl

On the Unintended Power of the Snapshot