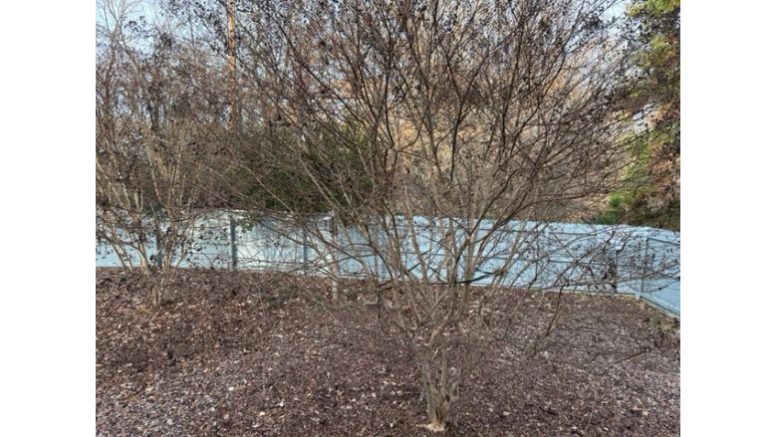 Two crapemyrtles survive the winter months by “sleeping,” thriving where a redbud could not. Photo by Kit Flynn.

It sounds so simple: Plant the right plant in the right space. However, this basic tenet of gardening is really rather difficult even if you have great soil. One problem lies in the need to interpret the proper light at the right time.

If you are like me, you spend the month of January thinking about all the new plants just waiting to be put into the garden. The surfeit of garden catalogs spur on my dreams of garden ecstasies while I mentally divide those plants requiring sun from those plants happiest dwelling in shade. This demands that you know precisely those areas that are sun-filled and those that are in the shade. My normal reaction is to simply look up at the January sky in the effort to designate sunny and shady garden patches.

I have learned that the January and February skies are misleading, partially because the leaves are gone, not only on my trees, but also on my neighbors’ trees. A sunny spot in January does not necessarily correlate to a sunny spot in June when leaves can effectively hide the presence of the sun.

Of equal importance are the concentration upon the movement of the sun and the recognition of when the dream plant will flower. My house faces south, placing my backyard on the north side. In the winter, the backyard resembles Siberia, whereas in the summer it feels like the Sahara. All this is due to the yearly movement of the sun.

We all learned as children that the sun rises in the east and sets in the west. However, that is only true in the months of March and September. Otherwise the sun migrates from rising in the northeast in the summer to rising in the southeast during the winter.

In the summer (June, July and August), our sun rises in the northeast, setting in the northwest. Because it has already started it progression towards the southeast, the August sun differs from the June sun. In December the sun, at its lowest point in the sky, will rise in the southeast and will set in the southwest, thereby explaining why my backyard is frigid and dark in winter.

An example of the last sentence explains why my backyard can support two crapemyrtles, sun loving plants, but could not sustain a redbud, a tree that doesn’t appreciate growing in direct sunlight. Now redbuds, Cercis canadensis or C. chinensis, bloom early in the season, usually in February. They are happiest dwelling on the edge of the woodland, requiring the sun’s energy in December and January when the leaves are off the trees. When these leaves return, they serve to protect the redbud from the stresses of the summer sun.

Several years ago, a volunteer redbud appeared in my backyard, much to my delight. Because the backyard receives summer sun, I planted two crapemyrtles to accompany it. Two years later, the crapemyrtles were flourishing while the redbud was gasping for life. The problem lay in the fact that the redbud lay in the January shade at a time when it needed the sun’s energy. The crapemyrtles could survive the period of darkness in January and February because they were still asleep, only awakening after the sun had moved sufficiently to the northeast in April, thereby flooding the area with needed sunlight. Knowing when a plant needs sun energy—particularly to foster blooms as with the crapemyrtle shown here—helps to guide its placement in the garden. Photo by Kit Flynn.

This is the reason it is of paramount importance to know when the plant needs that sun energy if it is to bloom. Although there is sufficient sun to sustain roses in the backyard during the summer, this would be a terrible place to plant them as roses never go completely dormant. Look at roses in January—you’ll be surprised to see the new growth they are putting out. They would not be able to produce this new growth in the dark of my backyard during the same period.

Afternoon sun, especially during the summer, is far harsher than the morning sun. Even my roses, sun lovers that they are, appreciate some respite from the afternoon sun. Camellias are said to require some shade. I have found, however, that when they go dormant in the summer, they can withstand a lot of summer sun. If they are going to perform for long periods, they really want the cooler fall and winter sun. Those planted in more shade do not bloom quite as profusely, I have observed.

Another factor affecting the assessment of sunny areas is this generalization: Gardens, as they mature, get shadier. Just as babies eventually turn into teenagers and teenagers eventually make that huge jump into adulthood, trees and shrubs grow. Neighbors’ trees eventually may block out your direct sunlight.

The moral of the story is this: Research your plant so you know when it should bloom. Take to heart its requirements. After all, it’s your garden—and you want it to succeed.