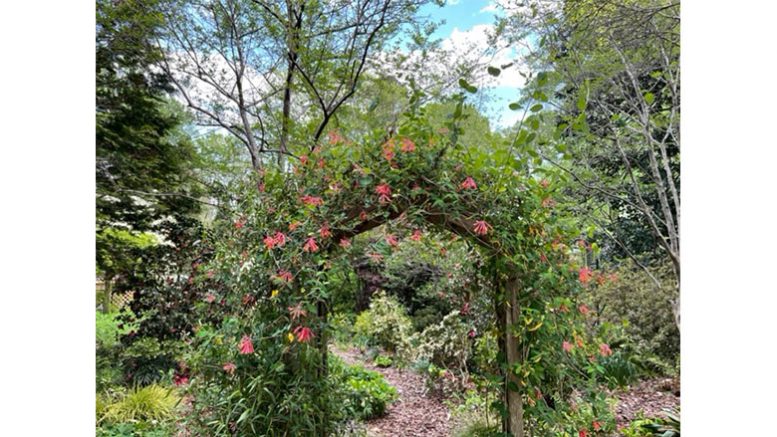 Recently I picked up Green Thoughts: A Writer in the Garden by Eleanor Perenyi – and was enchanted. Published in 1981, this was her only gardening book but fortunately Modern Library had the good sense to reissue it in 2010, a year after her death.

Born in 1918 in Washington, DC, Perenyi never graduated from high school. In 1938 she married an impecunious Hungarian baron only to leave Hungary in 1940. Amazingly, despite her lack of even a high school diploma, she became the editor of Mademoiselle before retiring in Connecticut where she became a first-rate gardener.

Deploring those Victorian gardens that specialized in “carpet-bedding” – using masses of colorful annuals to simulate a carpet (“They quickly became the basis for the only really hideous gardening style on record”), she was a fan of English cottage gardens and the herbaceous borders advocated by Gertrude Jekyll.

Of gardening in the tropics, she says, “I gardened one year in a tropical country and found that eternal bloom led to ennui.” I couldn’t have stated that better myself as I enjoy the four seasons. I love the way the August sun differs from the May sun. As soon as the night temperatures become cooler, I relish seeing the relaxation in the roses – and by August the sameness of the annuals begins to bore me. That coleus that looked so super in June begins to pall by late August. I love color in the garden but not from one source.

Her description of dahlias is beyond wonderful: “Some are as blowzy as half-dressed Renoir girls; others are like spiky sea-creatures, waterlilies, or the spirals in a crystal paperweight; and they do shoot up to prodigious heights. But to me they are sumptuous, not vulgar, and I love their colors, their willingness to bloom until the frost kills them, and, yes, their assertiveness.” Now that is delicious writing.

Daylilies can have silly names, something Perenyi picks up on: She decries some of these overly precious names, such as “Precious One, Disneyland or Bitsy,” just as she dislikes those in perpetual bloom. I couldn’t agree more as daylilies should rule the roost in June and in part of July, only to fade into the background come August. As she states, “A border is, among other things, a calendar of the seasons, and I don’t look for columbines in August or chrysanthemums in July.”

Gardening primarily in the 1970s and 1980s, Perenyi was in the forefront of the movement against pesticides and herbicides. Horrified at the use of 2,4,5-T that was a major ingredient in Agent Orange, she wondered why gardening editors weren’t questioning the continued use of 2,4-D. Instead of falling back on using chemicals, she extorts us to follow good gardening practices, such as crop rotation, the use of compost and mulch, and to develop an awareness of beneficial insects.

Her book is also filled with interesting gardening trivia. Did you know that Japanese beetles are not pests in Japan where the bacterium responsible for milky spore disease occurs naturally in the soil? Because we lack that particular bacterium in our soil, Japanese beetle populations have run amok for many American gardeners. In the 1950s, gardeners turned to sprays to eliminate the beetle, only to have it develop an immunity. It was only when “milky spore became available in powder form sold commercially [that] the beetles [were] finally routed….Why, then, did it take so long to appear on the market? Why isn’t it sold…at every garden center?”

I’d never thought much about seed tape before but Perenyi certainly has: “Anyone who can’t scrape a shallow trench with a hoe, then walk down it scattering seed from a packet, had better abandon gardening forthwith.” By now I found myself madly in love with not only her writing but also her opinions – and best of all, she made me laugh.

However, unlike with Gertrude Jekyll, Perenyi doesn’t demand that you agree with her. There are several tenets I want my garden writers to have: I desire a good command of language that isn’t filled with hyperbole; I like to hear the writer’s opinions but I don’t want them inflicted upon me; and I want an occasional laugh.

Who hasn’t done something incredibly stupid in the garden? Perenyi describes how she managed to plant all determinate tomatoes without realizing there were two types (determinate and indeterminate) that needed an occasional pruning of suckers. Her description of what follows is hilarious (you’ll have to read it for yourself). A garden writer who can admit to her own foibles is what I call a true and honest gardener.

Be the first to comment on "Too Cold to Garden? Read a Book"