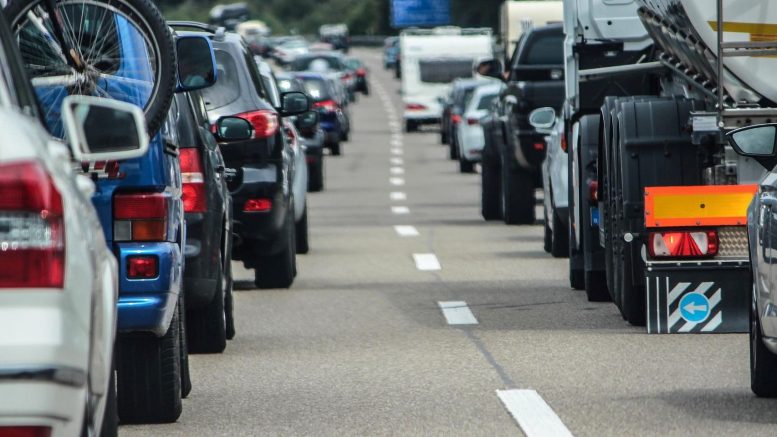 The Blue Hill redevelopment plan was promoted in part as a way to alleviate congestion around the intersection of Ephesus Church Road and Fordham Boulevard (US-15/501). The town spent a fair chunk of change to widen and redesign that intersection, but then also approved the construction of about 1,500 new housing units nearby. Many of these units have already been built, others are currently under construction and hundreds more likely will be approved in the coming years.

In terms of congestion, the new housing might seem likely to overwhelm even the traffic improvements, but Town of Chapel Hill officials told TLR that the additional traffic had been accounted for.

“The Phase 1 roadway improvements, constructed in 2016 and including the Ephesus Church/Fordham intersection, were primarily intended to improve safety and efficient traffic flow,” said Corey Liles, planning manager for the town.

“The Town then completed a Traffic Impact Analysis in 2017 which modeled expected Blue Hill development and overall traffic growth to determine necessary improvements that would mitigate congestion,” Liles added. “Some of the smaller-scale improvements, such as new turn lanes, are being constructed by private developers as requirements for their projects.”

The next major road project in the immediate area, Elliott Road Extension, is being constructed through a public/private partnership between the Town and the developer of the Park Apartments project. The proposed road crossed private property, so a memorandum of understanding was used to secure right of way for the Town while also supporting development of the remaining property for multifamily housing.

“In each of those cases, private development is serving as a tool for obtaining traffic improvements,” Liles asserted, and cited an excerpt from the 2017 TIA (p. 96, Figure 19A) that shows the expected positive impact of Elliott Road Extension (the blue line to the south) on traffic flow. Estimated traffic volumes in the Blue Hill district in 2030 with and without road improvements. See text for explanation. Courtesy Town of Chapel Hill.

Each pair of numbers on the map shows projected daily traffic volumes without network improvements (on top) versus with them (on the bottom, underlined). “Note that building Elliott Road Extension pulls more than 7000 daily trips off the segments of Ephesus Church Road closest to Fordham Blvd, thereby relieving traffic congestion at that intersection.”

Just to the north, however, another big bottleneck remains the merging of northbound Franklin and Fordham. “There are no immediate plans to remedy this merge,” said Bergen Watterson, transportation planning manager for the Town. “Capacity improvements along Fordham Boulevard between S. Columbia Street (15-501) and I-40 are identified in the State Transportation Improvement Program (STIP) but are in the ‘non-committed’ timeframe, meaning that they are not planned until 2029 and beyond, and are not likely to be funded.

“The state is in the process of updating the STIP and we will know if the roadway improvements are funded in the next month or so,” Watterson continued. “A few alternative concepts have been discussed related to this area but the Town and North Carolina Department of Transportation [NCDOT] have not fleshed them out.”

The 15-501 Corridor Study, which was managed by the Durham-Chapel Hill-Carrboro Metropolitan Planning Organization (DCHC MPO) several years ago, showed a potential design for this area as well. The study was not adopted by the MPO or the Town, and the MPO is currently in the process of finding another consultant to work on the Chapel Hill sections of the study area.

“The hope is that a new consultant will be able to produce a corridor plan that meets the interest of the Town and the MPO,” Watterson elaborated. “The state canceled the most recent project prioritization process (SPOT 6.0) due to extreme cash flow issues and has not allocated funding to any new projects. The Town is working to begin construction on the Fordham Sidepath, a multimodal path between Cleland Drive and Willow Drive, as well as beginning design on the federally-funded side path extensions along Fordham to Old Durham Road. New developments along Fordham Boulevard including UPlace, University Inn and Aura Blue Hill, are required to construct side paths and other traffic mitigations through their permitting process.”

In the long run, the only real answer is public transportation to get some cars off the road.  “The Town and its regional partners are exploring regional transit options in the wake of the Durham-Orange Light Rail demise,” said Watterson. “Better regional transit options can help reduce single-occupancy vehicle trips, which are what contributes to congestion at that end of town and everywhere else.”

As noted, the state has had to suspend the usual “reprioritization” cycle for road projects already listed on its transportation improvement program (STIP) because reliable cost estimates could not be made. As an interim measure, a draft re-evaluation of the current STIP will be issued in May. It will be open for public comment, then a revised plan is to be issued over the winter. That too, will be open for public comment before being made final around the middle of 2023.

“We are just weeks away from releasing the revised draft STIP document,” Aaron Moody, public information officer for NCDOT told TLR. “We had to pause the scoring on the current round of reprioritization because costs are escalating so quickly. The current STIP covers 2020 to 2029. Projects in the first half are considered programmed, so essentially locked in. Those in the second half of the STIP period are considered developmental and are subject to reprioritization.”

According to the interactive STIP map on the NCDOT website at the end of April, a $33-million “capacity improvement” project is planned for US-15/501 from Ephesus Church Rd. to Interstate 40. However, given that right of way acquisition is not scheduled until 2029, it dangles at the very far end of the STIP period.

Moody stressed that the revisions in lieu of formal reprioritization are still driven by input from the Town and from individuals.