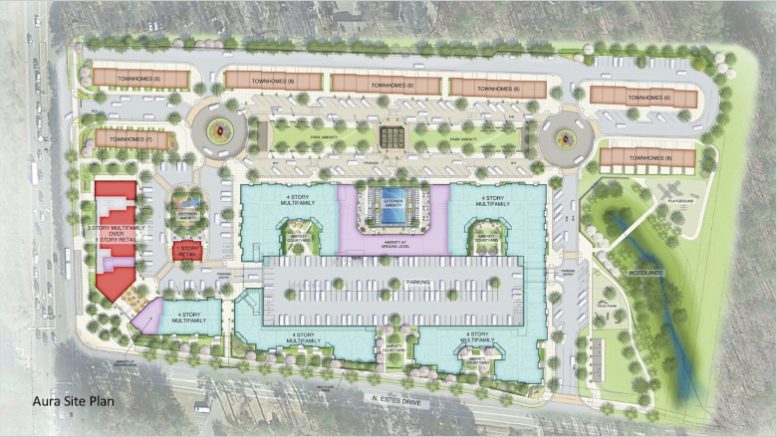 The project, named Aura, is envisioned by the developer as a “third place,” which in community building is the social place separate from home (first place) and work (second place). Examples of third places are churches, cafes, clubs, public libraries, bookstores and parks. The designers for this project have focused on parks and public spaces, restaurants and small convenience retail, thereby creating a significant “play” component in the live-work-play trio.

While fear about existing traffic congestion on Estes Drive has dominated discussion and has resulted in pushback from some of the nearby residents, multiple engineering firms — two working for the town and one for the developer — say the intersection will function better than its current condition once the state-funded and proposed developer improvements are complete.

Both the town model and the developer model predict that the queuing along westbound Estes Drive, which currently can back up more than 2,200 feet at certain times — as far back as the schools — should be reduced to under 600 feet after the roadway and intersection improvement are completed. For perspective, Somerset Drive is about 1,600 feet from MLK Jr. Blvd.

The site plan designed by CiDesign includes an urban plaza for outdoor coffee, drinks or dining; a central park for flexible outdoor gathering space for leisure enjoyment and community cultural events; and The Woodlands, a larger park with trails and improvements to an existing small stream. The development would include 361 apartments, up to 59 for-sale townhouses, 15,000 square feet of neighborhood retail, plus more than 3.5 acres of recreational space mentioned above. The DOT road improvements include an additional westbound left turn lane. the developer will extend the westbound right-turn land and construct dedicated turn lanes into and out of the project.

As part of the NCDOT project, the town is getting construction bids for a combination of sidewalks and multiuse paths on the north side of Estes Drive from Estes Hills Elementary School to Somerset Drive and sidewalks and bike lanes on the south side of Estes Drive from the Caswell Drive stoplight to Martin Luther King Jr. Blvd. As part of its development, Trinsic would build bike-ped infrastructure along its property on Estes Drive and MLK Jr. Blvd, install a push-button crosswalk to connect to a possible future YMCA entrance on Estes Drive and construct the trailhead and first section of the town’s planned north-south greenway along a Duke Energy easement.

The combination of town-built and developer-built ped-bike infrastructure would be the first significant facilities for pedestrians and bicyclists along Estes, enabling children and their parents to walk or bike safely from the elementary and middle schools to the YMCA and Amity Church, or perhaps for an ice cream cone or bagel at Aura’s village center.

This project also provides many amenities that Chapel Hill says it values:

A top goal for Aura’s placemaking team has been to provide exceptional public spaces, designed for people first. This priority has shaped nearly every design decision on this project. There will be sidewalks, greenways, shade trees and bicycle parking. Aura will provide destinations to walk to, such as restaurants, a weekly farmer’s market and cultural activities in the parks.

Further, as a mixed-use transit hub, Aura will make it safe, convenient and enjoyable for its residents and those living in surrounding neighborhoods to grab a cup of coffee before boarding Chapel Hill Transit’s fare-free NS bus to downtown, campus or UNC hospital. Indeed, Aura will set a new standard for quality, place-based real estate development in Chapel Hill.

Susana Dancy, owner of Rockwood Development Group, has more than 20 years of experience using principles of placemaking to create value in real estate development and investments. She works as a consultant for Trinsic Residential Group.

Feel the Heat: Brad Linde Ensemble’s Fiery Night of Jazz at The Cave