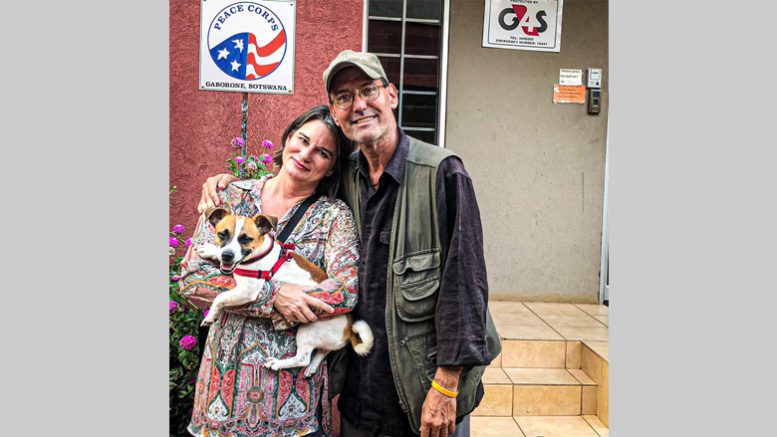 Jill McCullough, along with her friend Frank Goldsmith and her dog Jacky

New Year’s Eve 2017 will always stand out for Jill McCullough. She got a lot of paperwork done.

As revelers gathered at parties large and small across the Triangle, McCullough hunkered down inside her home in the Caldwell community in Orange County and filled out her application to join the Peace Corps.

It may have sounded like a dull evening, but forsaking a night on the town with friends was worth it. It was a small price to pay for what led to the best experience of her life, one that would take her out of her comfort zone and into 115-degree temperatures, cooking dinner for people from different cultures and being renamed “Amogelang” for 18 months.

By and large, it was all on a whim. From the time she graduated from N.C. State, joining the corps was something that McCullough viewed as a long-range goal.

After a brief stint as a newspaper editor in Hillsborough, McCullough joined Rick Hendrick Chevrolet as communications director at Chapel Hill’s Performance Automall location in October 1999. For 21 years, her day-to-day office duties led to a comfortable professional life. Her voice could be regularly heard on radio car commercials throughout the Triangle.

Joining the Peace Corps was on her bucket list, but McCullough had it slated for her retirement. That changed in 2010 when she was diagnosed with muscular dystrophy. In her late 30s, she became symptomatic.

“I started tripping over my feet at work,” McCullough said. “I found out muscular dystrophy was fairly common on my mother’s side of the family.”

Faced with the possibility of being in a wheelchair combined with the stringent medical clearance required for service, McCullough felt a greater sense of urgency to join the Peace Corps while she could still walk.

She was approved seven months after she applied on that New Year’s Eve.

“I actually didn’t think I would get accepted,” McCullough said. “The medical standards are so hard to pass. When I got accepted, I thought I might as well go ahead and go for it.”

McCullough, who has a nursing degree from UNC-Chapel Hill, applied to go to Botswana, in southern Africa. “I’ve always been interested in viruses,” McCullough said. “The position open at Peace Corps Botswana was clinical health. I thought that would be the best fit for me.”

In the 1980s, the AIDS virus predated COVID-19 in blurring the lines between health and politics. While HIV has faded from public view in America, it’s still part of daily life in sub-Saharan Africa. In 2013, the prevalence of HIV-AIDS in Botswana was estimated at 21.9 percent of adults.

Leaving her comfort zone in Chapel Hill, McCullough spent her days in Tsabong, near the Kalahari Desert, home to the most extreme temperatures in the country. During the summer, she would stay inside a house without air conditioning while highs often soared to 110 degrees. In the winter, lows would dip below freezing, only to rebound into the mid-80s by the afternoon.

“I was used to North Carolina heat,” McCullough said. “The first summer I was there, I didn’t know what to expect. The last summer, it was more manageable.”

She also didn’t have a car, which led to her bonding with a mid-20s taxi driver named Danny, who had never met a corps volunteer. “He just became my sidekick for 18 months,” McCullough said. “He would show up unannounced at my house for dinner. He started calling me his mom. I cooked almost every day and he was just like a little kid and he was in his mid-20s.”

McCullough, who was given the name Amogelang in the Setswana language, rode the taxi to a hospital daily for work with the district health team. She introduced them to digital marketing.

“They don’t really use social media for accurate dissemination of health information,” she said. “I created a Facebook page for them called Botswana Health News and showed them how to get a message to thousands of people using social media. Before that, they used to have a truck with large speakers that they would drive through different neighborhoods to talk about health information.”

Other times, they would meet at a kgotla, or public meeting, where McCullough would deliver educational talks.

English is commonly spoken in Botswana, but “my biggest language barrier was my southern accent,” McCullough said. “And it’s true. I had so many people say ‘Amogelang, your English is strange. We can’t hear you.’ Sometimes I would fake a British accent and they would understand me better.”

McCullough also formed a strong relationship with Jacky, a dog she received from a nearby couple. It led to an ongoing Facebook feature dubbed Jacky Tales, where McCullough narrated Jacky’s adventures in the desert, whether it was a simple walk with his owner to an Engen (convenience) store to buy a drink or his strange fascination with chasing goats.

McCullough was supposed to remain in Botswana until October. Those plans changed abruptly because of the coronavirus. McCullough was one of more than 7,000 Peace Corps personnel scattered around the world who were evacuated beginning March 19. Two days later, she flew out without some of her belongings.

“I tried to pack the house as best as I could,” McCullough said. “I left most things behind. I really just had time to throw a few things in a suitcase and come home. I was working on the plan to transition back. All of that went by the wayside.”

Jacky had to remain behind. McCullough thought she had all the paperwork completed to take her dog back home, where he could chase the goats in Caldwell. As she was about to board her plane home, McCullough was told the government barred pets from flying home with their owners. For the past three months, Jacky has stayed with some of her owner’s friends in Botswana, but is expected to finally be reunited with his mother next week.

For years, McCullough worked six days a week in Chapel Hill and was content with being by herself. It took a trip to Africa to learn more about who she was. Once a loner in Chapel Hill, her house in Botswana was filled with other Peace Corps volunteers for weekend parties. McCullough hosted neighbors from her village for dinner. She learned that, in the end, she loved having other people around.

“All I did was work for the past 20 years,” McCullough said. “You can sit in a classroom for years and get as many degrees as you want. You can travel around the world. But until you go and live in another country and immerse yourself in the culture, you learn so much. You learn so much about yourself and you grow as a human being.”

Homeschooling? Advice from Those Who’ve Been There

1 Comment on "Traveling Far to Find Your Home and Yourself"