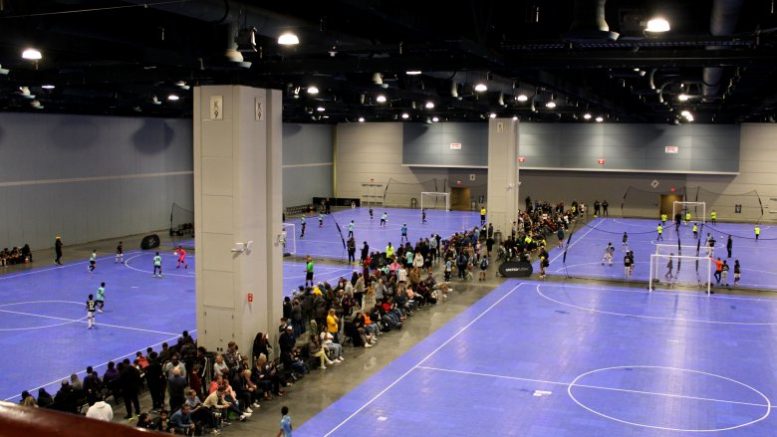 The Raleigh Convention Center hosted the United Futsal Eastern Conference from Jan. 6-8. Youth, ages 7 to 18, in 30 teams competed for the right to advance to the World Futsal Showcase this summer in Orlando. Photo by Michelle Cassell.

What do Pickleball and Futsal have in common? Both are faster and higher-scoring games than their respective counterparts, tennis and soccer. They are both played on smaller courts indoors and outside. Futsal and pickleball are seeing growth in popularity in the United States.

You may have heard of pickleball as a kinder, gentler form of tennis. In recent years, it has been marketed to older adults as a version of tennis requiring less running and allowing people of all skill levels to compete. It has gotten so popular that demand for courts has reached city council offices nationwide, including Chapel Hill.

Futsal, a type of soccer usually played indoors on a hard court, is similarly getting more notoriety on the sports scene, particularly gaining popularity with youth in the United States. It is played with two teams of five (instead of soccer’s six), including the goalie, and unlimited substitutions are allowed. This gives more players additional chances to work on footwork and goal-scoring than in regular soccer, thus creating broader opportunities for youth to experience playing action.

“This is giving my daughter a great way to keep playing soccer and develop her skills in a fast-scoring environment,” said John Michaelson of Chapel Hill.

Over the Jan. 6-8 weekend, approximately 120 kids, ages 7 to 18, in 30 teams gathered at the Raleigh Convention Center for the Eastern Conference finals, which is a regional part of the United Futsal Showcase Series held throughout the country. The series represents the largest open futsal competition in the United States. Teams that played in this tournament could become eligible to compete in the World Futsal Showcase to be held in Orlando this July.

For youth who struggle with the size of the soccer field and its fewer opportunities to score, futsal can build confidence while giving new and veteran players an additional environment in which to perfect skills. A futsal playing field is a basketball-sized court with a smaller ball that doesn’t bounce as high or as often as a soccer ball. Those differences help create advantages for youth play.

According to Daniel Coyle’s book The Talent Code, players touch the ball in futsal six times more per minute than they do in soccer—a definite asset for young players keen to play rather than wait for a pass. The tightness of the playing field means moves have to be quicker. Skills transferred to a soccer field then enjoy the luxury of “acres of free space in which to operate,” as Coyle put it.

Futsal (also known as five-a-side soccer) was invented in the 1930s by Juan Carlos Ceriani in South America. Brazil is touted to be the international futsal hub because of its early dominance of the sport. Such players as the late Brazilian soccer legend Pelé played futsal to hone his skills on the soccer field. Organizations such as United Futsal are helping to spread awareness and recruit players in the U.S.

What’s in a name?

The sport is supported by other organizations as well, including U.S. Youth Futsal, a member of U.S. Soccer, as is United States (U.S.) Futsal. In fact, it was U.S. Futsal CEO and President Alexander Para who came up with the new name for what was then the U.S. Minisoccer Federation (USMF) during the 1980s.

Futsal comes from the Spanish “fútbol de salón” and the Portuguese phrase “futebol de salão,” both translating to “indoor soccer.”

In a phone interview with The Local Reporter, Para said, “We needed a name that did not have to be translated into so many different languages. Five-a-side soccer was too confusing.”

To clarify the difference between United Futsal and U.S. Futsal, Para explained, “United States Futsal is a governing body that is here to develop the game at all levels by registering players, training coaches, and referees. We also conduct competitions at the state, regional, national and international levels.

“That has been our mission since 1981, when we adopted the name ‘Futsal.’ United Futsal started about 12 years ago when its teams came to compete in our national championship. Since then, it (United Futsal) has been running its tournaments,” Para added.

2 Comments on "Triangle, Eastern NC Youth Kick It Out at Futsal Regional Tournament"