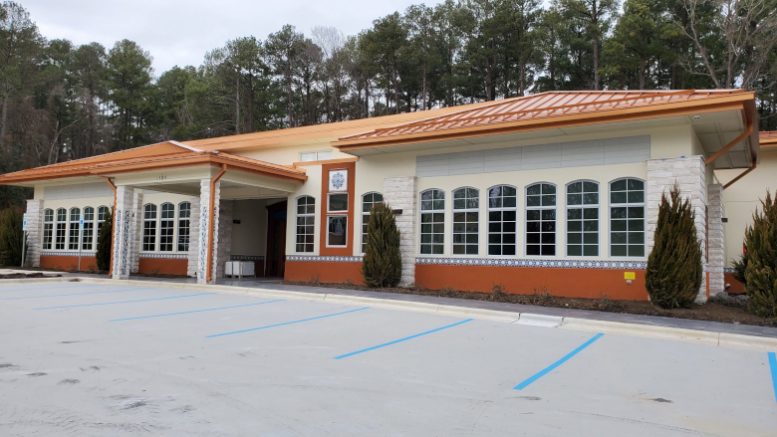 After over a year of social distancing, a new, sustainable development offers residents of Orange County a chance for cultural connection. Construction is now complete on the Sancar Turkish Cultural and Community Center, funded partially by a Nobel Prize-winning UNC-Chapel Hill professor and his wife.

The Aziz and Gwen Sancar foundation’s new community center features a 9,700-square-foot building with classrooms for students and community members. A two-story, guest house will also host up to eight visiting Turkish students or scholars at low cost.

The building was designed with an energy-efficient shell, meaning it features heavy amounts of insulation in the walls and ceilings. The facility is also south-facing, allowing it to draw plenty of sunlight through large, clear windows, said Lou Gerics, principal at Innovative Design Inc., the architectural firm that designed the center. Making the building sustainable was particularly important to the Sancar family, Gerics said.

Because photovoltaic solar prices have decreased so much in the past decade, people can make their own electricity for close to $3.75 a watt. Thus, despite all the innovative technology included in the center’s design — such as solar panels, a geothermal system, a solar reflective roof and a small solar system — Gerics said construction was relatively affordable. This has been true for similar projects the firm has pursued.

“We know that our daylit schools, we have averaged 5 percent below budget. Not all of them are quite the same as the Sancar center, but they’ve had daylightings, all the energy-efficient measures we could get in, rainwater catchment systems,” Gerics said. “They’ve had PV systems, small solar thermal systems. Over the years, they’ve still averaged 5 percent below budget.”

Although construction on the Sancar center moved slowly due to the coronavirus pandemic, said Gwen Sancar, she and Aziz Sancar hope the center will help all local citizens, and Turkish people in particular, to celebrate Turkish culture. It is their hope that the center will improve cultural understanding, help young people prosper while studying in America and teach Americans more about Turkey — the country of Aziz’ Sancar’s birth.

Both Gwen and Aziz are Sancar professors in the UNC School of Medicine’s department of biochemistry and biophysics. After pursuing a medical degree in Turkey, a doctoral degree in the United States and joining the faculty at UNC in 1982, Aziz Sancar is now the Sarah Graham Kenan Professor of biochemistry and biophysics at UNC. In 2005, he was the first Turkish American elected to the National Academy of Sciences.

Ten years later, he won a Nobel Prize in chemistry for mapping the cellular mechanisms that underlie DNA repair. This process occurs constantly in response to the presence of harmful substances in the environment, like ultraviolet radiation or cigarette smoke.

Recently it was announced that Aziz Sancar’s house, a 36-room historical mansion in the Savur district of southeastern Turkey’s Mardin province, will be converted into a museum. Aziz Sancar’s room will be designed as a study room, where his scientific works and the Nobel Prize will be displayed.

Mardin Governor and Deputy Mayor Mustafa Yaman said creating this museum will keep alive the memory of the Turkish scientist who has been a role model for young people.

Maybe the cultural center will serve as an inspiration, too — an example of what is possible when we prioritize sustainability.

1 Comment on "Turkish Cultural Center a Model of Sustainability"