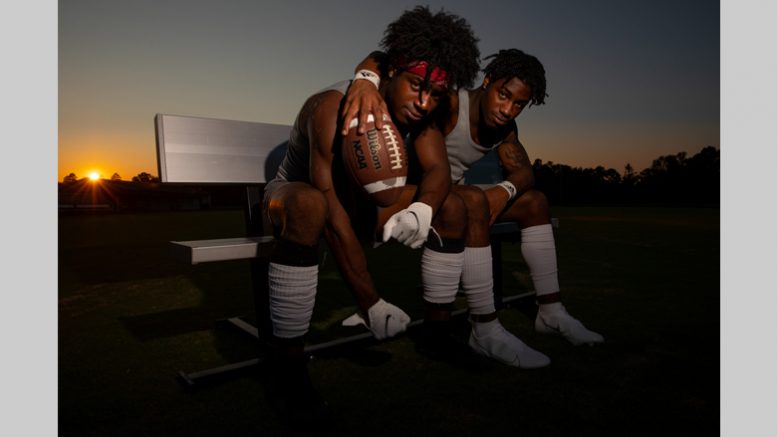 The school cancelled the 2017 varsity football season, but kept its junior varsity team, after struggling to build a program. Twin brothers Anthony and Anton Enoch were freshman then. But now, the 2019 Big 8 All-Conference players are trying to forge a path forward amid the coronavirus pandemic and a 5-and-49 record the past five seasons.

“We take it step-by-step,” Anthony said, “and even though last year we didn’t accomplish what we were looking forward to, we still made a couple good goals. There’s teams that East Chapel Hill hasn’t beaten in over five years.”

With Anton at quarterback and Anthony at wide receiver, they led ECHS to a 32-27 victory last season over Chapel Hill High in the battle for The King of the Hill. They brought the Hodgin Cup back to Weaver Dairy Road for the first time in 15 years. “When we did that,” Anthony said, “it brought faith back to East Chapel Hill football. More people started to believe in us, it was crazy. We really felt like anything was possible after that moment, because there was a lot of back-and-forth in that game.”

Then, this spring, the coronavirus hit. The Chapel Hill-Carrboro system pivoted to remote learning, including for the fall semester. With many school systems in the state doing the same, the North Carolina High School Athletic Association pushed back the start of fall football.

When the season finally gets underway, the Enoch brothers know it will be different — for another reason, too. The 2021 team will have new faces, Anthony said, because half of last year’s team featured seniors.

But while some teammates will be new, the brothers know each other well. Before some plays Anton tells his brother, “Be ready, because it’s coming to you,” Anthony recalled.

“Just the chemistry,” Anton said when asked about playing alongside his brother, “and knowing that he will fight through every battle no matter what. A lot of kids — that are either around us or play in our school district — don’t really got that mindset.”

Anthony’s favorite football memory with his brother was last year’s matchup against Northwood. It was his first game back after being diagnosed with a concussion.

“The game that I came back,” Anthony said, “was the game that the Virginia Tech coach came to, and I had four touchdowns with 210 yards. And I felt that was a blessing — to keep my head up and keep pushing forward.”

Their mother, Diane Pierre, is the twins’ biggest motivation. Everything they do on and off the field is for her, say Anthony and Anton, the youngest of six siblings.

Both Enoch brothers already have received interest from colleges, and Anthony has received a scholarship offer from N.C. Central. But the pandemic has caused upheaval in their recruitment, too.

Anthony was invited to the Blue-Grey Super Combine in Canton, OH, but couldn’t attend because he didn’t have a way to get there. Anton, meanwhile, as a 5’10” quarterback, has been a bit overlooked.

“For my position that I play, it’s hard, especially with the height being a problem,” Anton said. “I haven’t really gotten that many invitations from coaches, but I still put in work regardless just because who knows what can happen?” Anton didn’t really play quarterback until his junior year; he was a running back and defensive back his first year on varsity.

“It all depends on the situation,” Anton said when asked about playing on defense his final season. “I’m willing to do pretty much whatever when it comes down to the team. But I would like to play quarterback and play on the defensive side of the ball. Depending on how the team looks, I might just be able to do [it].”

The brothers can’t wait for football to finally begin.

“Even in practice,” Anthony said, “We’re never going to take it easy. We’re going to show them this is what football is. You have to be willing to get knocked down, but it’s your decision if you want to get back up. And that’s what builds character. That’s what builds a man. No matter the struggle in life, it’s your decision if you want to keep on fighting.”

Here Are Your Answers

Be the first to comment on "Twin Brothers Wait for Kickoff"