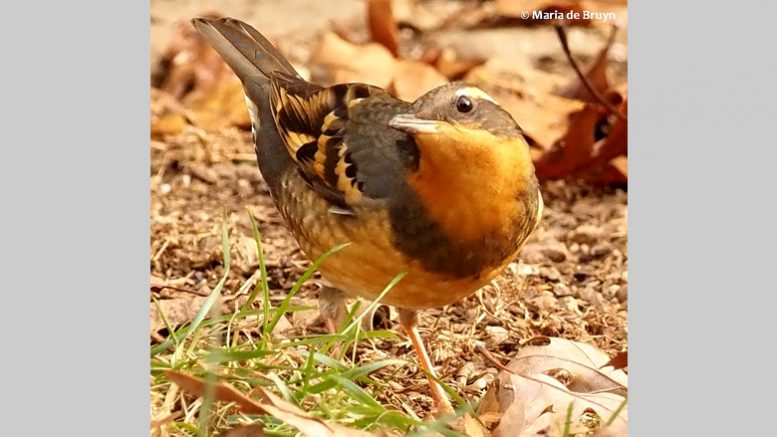 Among birders, people who are extremely focused on identifying as many species of birds as possible in their lives — and who will travel great distances to do so — sometimes are known as twitchers. The term is used more often in Europe than in the USA, but the behavior is known here, too.

Twitching has a bit of a bad reputation because it is believed that twitchers mostly care only about adding another “lifer” (first time they see a species) to their list and not so much about admiring the bird or learning about it. Fortunately, I haven’t personally met any twitchers, but I do know a number of birders who will travel a considerable distance to see a rare or unusual bird.

That scenario has been playing itself out the past two weeks here in the Triangle. Unusual birds spotted in our area include a vermilion flycatcher, evening grosbeaks and sandhill cranes.

I ultimately joined the migration of birders to a homeowner’s property in Cary to see a bird that is normally only found in the northwestern United States: the varied thrush. It is normally found migrating back and forth in the area stretching from Alaska, through Canada, down to California. So, seeing one here in the Southeast is highly unusual. As you can see from the photos, this robin-sized bird is a real stunner. His orange, gray, yellow and white feathers grow in a wonderful pattern. He is handsome from any angle — front, side or back!

The opportunity to see this lovely bird was offered to the local community by homeowners Tony Hewitt and Marla Wolf. They generously allowed people to come to their side yard (by appointment) to watch over the backyard fence to catch sight of the thrush.

Marla created a bird-attracting backyard nook that draws multiple species of birds for her birder husband to admire. When the couple began welcoming viewers to their yard, she had the bird bath moved so that it was more clearly visible for visitors to catch sight of the thrush there.

Tony offered interesting bits of information about the bird. Luckily for the visitors, he has had time off work and been willing to share some of it with the bird-seeking travelers. When I visited, more than 110 people had already come by, including some from as far as Tennessee and Virginia.

Tony and Marla have been tallying visitors with a visitor’s book, offering hand sanitizer to those who sign. Birders have been required to wear masks and when I visited on a “slow” day, it was easy to socially distance oneself from other birders and photographers. Only a couple other people were there for a while (and I was alone some of the time) waiting for the thrush to occasionally come out of the shrubbery to eat some seeds or take a drink in the bird bath.

This is only the fifth time that a varied thrush has been seen in North Carolina. No one has any idea what got the bird so far off-course during its migration and no one knows how long it will stay around. But those of us who were privileged to see it were thrilled, while hoping it will survive the winter here and be able to return to its home grounds out west.

Be the first to comment on "Twitching in the Triangle?"