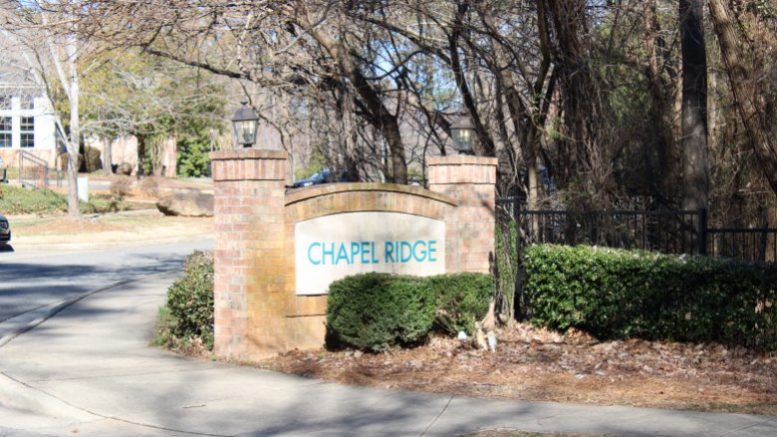 A murder victim was found in the parking lot area of Chapel Ridge student housing complex on Thursday, Jan. 12, around 2:30 p.m. The investigation is ongoing, and no arrests have been made. This is the second homicide in one week in Chapel Hill. Photo by Michelle Cassell.

UPDATE: CHAPEL HILL. 1/20/2023, 3:55 p.m.—The Chapel Hill Police Department issued a statement that an arrest was made related to the death of  K’son Lamoriquia Thorpe, 27, of Oxford, found around 10:30 p.m. on Jan. 9 in the parking lot of a public housing community at the 300 block of South Estes Drive Extension, after police responded to a call of a reported shooting. The most recent release stated:

“Folly is being held at the Orange County Detention Center without bond. State law prohibits the public release of information about the juveniles. The investigation is ongoing and no additional information is available at this time.”

The original story appears below.

Two men were murdered last week in Chapel Hill, starting the new year with deadly statistics in a college town where murders are rare. On Thursday, Jan. 12, Marcus Anthony Smith, 24, of Durham, was found shot dead around 2:30 p.m. in a parking lot in the 600 block of North Heritage Circle in Chapel Hill at the Chapel Ridge apartment community.  No arrests have been made. The investigation is ongoing and no further information was provided. The body of a 27-year-old man from Oxford was found in a parking area located near a public housing community in the 300 block of South Estes Drive Extension on Monday, Jan. 9, around 10:30 p.m. No arrests have been made, and the investigation is ongoing. Photo by Michelle Cassell.

The year’s first homicide occurred earlier in the week on Monday, Jan. 9. Around 10:30 p.m. K’son Lamoriquia Thorpe, 27, of Oxford, was found in the parking lot of a public housing community at the 300 block of South Estes Drive Extension, by CHPD responding to a call of a reported shooting, according to the police department’s release.

The public housing community is across from University Place. It was built in 1970, has 44 row home units and is owned and managed by the Town of Chapel Hill.

In both cases, the CHPD said in previous public statements, “Investigators have no reason to believe that there is an immediate threat to the areas.”

These two homicides are the first recorded in Chapel Hill in 2023. According to CHPD statistics, there were five in 2022, one in 2021 and none in 2020 as previously reported in The Local Reporter (TLR).

Newly appointed Police Chief Celisa Lehew told TLR, “Each investigation is ongoing. As that work continues, our Chapel Hill Crisis Unit is offering support to the community members affected by these cases. It is important that we work together as a community. If you have any information about these cases, call 911 or contact us here at the Police Department by calling 919-942-2760. If you would like to remain anonymous, call Chapel Hill-Carrboro-UNC CrimeStoppers at 919-942-7515 or visit Chapel Hill CrimeStoppers.”

Another shooting occurred without a homicide connected to it earlier on the same day, Jan. 9, when Thorpe was found. The CHPD press release said that at around 5 p.m. in the 1100 block of Highway 54, which is near the Laurel Ridge, Chase Park and Kingswood apartment complexes. That departmental public release stated, “A preliminary investigation found that one driver fired shots at another driver’s vehicle, leaving one passenger with a non-life-threatening injury.”

An investigation is continuing in an effort to identify a suspect. Also for this crime, police are asking for any information the public may be able to provide via the above-mentioned contacts. Be the first to comment on "Two Homicides, One Shooting Mark Violent Start to 2023 in Chapel Hill"