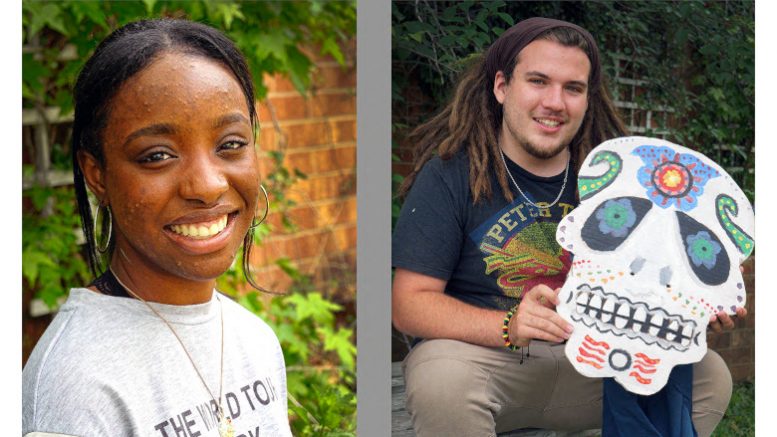 NaTasja Jeter believes that launching a Black and Brown Student Union at her school has helped build bridges of understanding.

Honored at the CHHS annual awards ceremony, May 20, NaTasja and Sol each received a $1,000 Bridge Builder award from The Lincoln High School-Chapel Hill High School Joint Alumni Association, a four-year-old cohort of local Black and White elders, dedicated to making up for their segregated school history by seeking out and highlighting young public service scholars of today.

Dear Reader: In the interest of full disclosure, this scribbler (CHHS ’63) is a founding member of that joint alumni group, and I coined our motto: “It’s Never Too Late… to be a Classmate!”

Let me say straight from this old photographer’s heart — what a blessing and pleasure it was to meet Sol and NaTasja and get to photograph them for this week’s Townie Lens; both teens are inspiring youth leaders: NaTasja is excited about attending UNC-CH where I am sure she will be a campus sparkplug and So is a dedicated performance artist who has earned a drama scholarship to study puppetry at the University of Connecticut, one of the few schools in the nation to offer that major.

Sol, the son of Richard and Amanda Ramirez of Chapel Hill, explains, “Growing up, White and Hispanic…learning to appreciate/love the challenges and blessings of coming from mixed cultures and backgrounds, I’ve been exposed to the struggle of many people.”

Volunteering at the IFC kitchen and connecting with Living Legends, an organization working to empower high school students of color, Sol helped design the artwork for the new “Rise Above Racial Injustice” bus that is a part of the Chapel Hill Transit system.

Sol’s drive to “leave this world in better condition than it was when I came into it,” inspired him as a kindergartener to create his own puppet company, “I,2,3 Puppetry,” a 12-year-old youth puppet company that utilizes giant puppets to dramatize “social issues for a positive impact on the community and to represent people of all walks of life,” Sol says, adding, “Through my diverse mix of culture, I have a fire to use this to motivate and energize my art.”

NaTasja, the daughter of Toni and Darrell Jeter of Chapel Hill, explains why she launched the Black and Brown Student Union at CHHS: “I want Black and Latinx boys and girls to not doubt their ability to chase their dreams…because I know this divide can be bridged…if we create an environment where students of color feel empowered and encouraged, we will start to see real change.”

Bridging that divide, NaTasja launched the Black and Brown Student Union, and since then has seen positive changes, with the school improvement team turning recommendations from NaTasja’s group into action plans.

Entering CHHS as a freshman and qualifying for honors and AP classes, NaTasja says she became concerned when she noticed “the lack of Black and Latinx students…I was the only Black student in a vast majority of my honors classes.”

She adds, “This opportunity gap does not fit the narrative of Chapel Hill Carrboro City Schools…a place with countless opportunities for its students…why does it look as though only a certain group of students have access to these opportunities? Why is it that all my friends who look like me feel, ‘not as smart’ as their White and Asian peers?

NaTasja, who credits her parents for instilling in her at a young age the imperative to be a leader, is also a role model in the Chapel Hill NAACP Youth Council, a group dedicated to “addressing issues that promote racial equity.” This fall she will enter UNC-Chapel Hill where she plans to pursue an ambitious double major in political science and global studies.

Until the mid-1960s, Black and white students attended separate high schools in Chapel Hill-Carrboro: Lincoln High on Merritt Mill Road for the Black students and Chapel Hill High on West Franklin Street for the white students. Although the two schools were only 0.9 miles apart physically, they were worlds apart culturally. This was a fraught time for equity and the struggle for social justice in our community.

Fast forward to 2018: Confronting that disconnect, a group of village elders from those two formerly-segregated high schools formed a joint alumni association with the goal of establishing a community service award worth $1,000, aimed at honoring graduating seniors who had devoted considerable effort to advance racial equity.

Ellington, CHHS Class of 1963, citing the origins of the Bridge Builder Award, said “The LHS/CHHS Bridge Builder Award was created by former students of the then-segregated Lincoln High School and Chapel Hill High School, ” adding, “Our schools were very close in proximity but our experiences were very different — because of the makeup of the community from which we came when Lincoln High and Chapel Hill High integrated the student population over 50 years ago… Our mission is to increase awareness and encourage activities to help bridge the gap between the various races in the Chapel Hill and Carrboro communities.”

Ellington was followed to the podium by Dr. Carolyn Daniels, who attended all-Black Lincoln High School her first three years of high school, before joining the inaugural integrated class of CHHS Class of 1967. Daniels, who earned her Doctorate in Ministry this year, saluted Sol and NaTasja by saying, “The students selected for this award truly represent that mission. They both have an awareness of disparities and inequities within communities and are building bridges and supporting other students in this mission.”

Dr. Daniels concluded, “We will continue to encourage students to build bridges between the races in their community because the LHS/CHHS Joint Alumni Association envisions a society with equity for all that is free of racial discrimination.”

Catching up with last year’s winners of the Bridge Builder Award: Phoenix Tudryn just finished a stellar first year at UNC, where he made the Dean’s List both semesters. He plans to double major in public policy and global studies with a minor in Spanish.

Kameron Walker is a rising sophomore at Norfolk State University, where this spring he played third base on the NSU baseball team and recently settled on majoring in psychology, perhaps with an eye toward counseling.

To India With Love