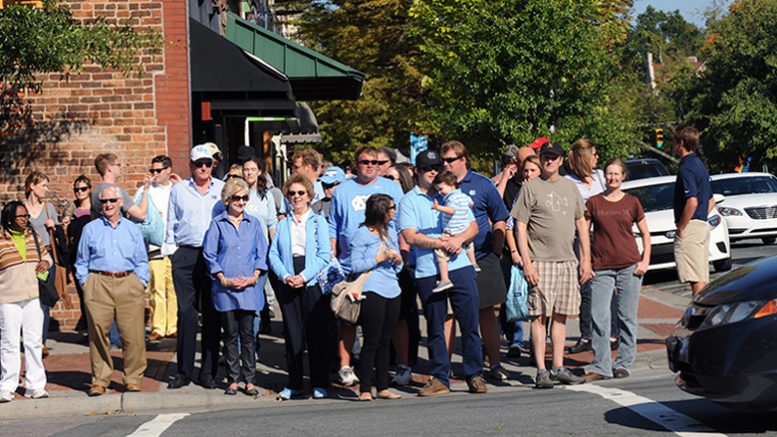 Recently I was talking with colleague, friend, and former Herald Sun columnist Neil Offen about Carrboro and Chapel Hill. The two are contiguous, one runs into the other, and often visitors don’t differentiate. But locals do. Here’s Neil’s perspective:

There are other differences, as well, between these two adjacent towns. Chapel Hill is older, founded in 1793, while Carrboro is newer — an offshoot of Chapel Hill. In fact, it wasn’t even Carrboro until 1913 (before that it was first West End, then Lloydville, then Venable.)

Chapel Hill is bigger — around 60,000 population — and Carrboro smaller, around 22,000. The two towns have separate police forces and fire departments and, of course, governments.

Yet with all those differences, it’s pretty hard to tell where one town ends and the other begins.

According to the website Distance Between Cities, there are 1.11 miles from Carrboro to Chapel Hill in the northeast direction.

Well, no, there really aren’t.

One town, in fact, flows seamlessly into the other. They are connected by roads and greenways and bike paths and, most of all, by shared values. They are both progressive, open, welcoming, culturally diverse.

Walk along West Franklin Street (in Chapel Hill) before it becomes East Main Street (in Carrboro) past Crook’s Corner and before you get to Brother Peacemaker’s Gates of Beauty body shop, and you will not notice any border or customs posts. There’s just an old sign in front of St. Paul’s AME Church that alerts you that you are entering CARRBORO.

No passports needed, but maybe, though, you can sense a kind of general atmospheric difference. There is, perhaps, a somewhat different vibe in the different towns.

But those somewhat different vibes actually blend well. Sometimes, you want the energy of a student-oriented universe, the quicker pace, the youthful focus. Sometimes, you need the world to be a little more laid-back, a bit more relaxed and communal.

Think about it like this. You can have, for instance, a boisterous dinner at 411 West in Chapel Hill, then walk a couple of blocks for a quiet after-dinner drink at B-side Lounge in Carrboro.

Or maybe check out the Carrboro Farmer’s Market on Saturday morning with your kids, then take them to Kidzu Children’s Museum for a cooking or gardening program at Chapel Hill’s University Place.

You can enroll in a ceramics class at the ArtsCenter, and then celebrate your well-thrown pitcher with a pitcher of martinis at Chapel Hill’s Crunkleton.

Or go in the reverse direction, listening to live music at The Cave (Chapel Hill), then finishing the night with a vinyl jukebox at the Orange County Social Club (Carrboro).

It really doesn’t matter which direction you go. You may wind up in a different town, but you’ll still be in the same community.” Three Things I Love About Each Town

Neil Offen is the volunteer editor of The Local Reporter.

Be the first to comment on "Two Towns, One Community"