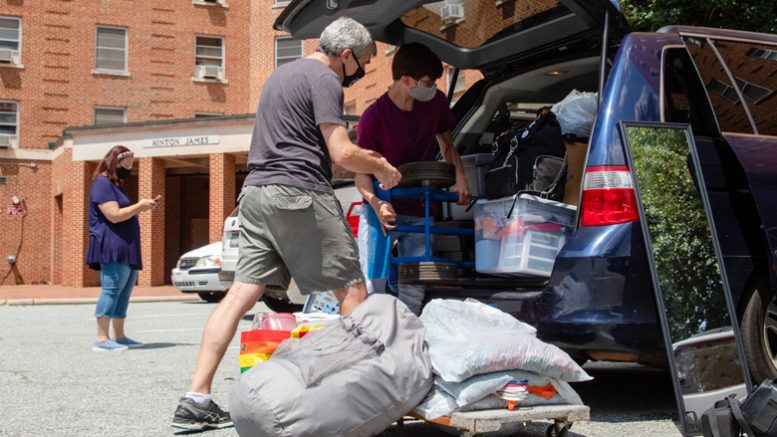 From unproductive meetings with student activists to having its bluff called by privileged, rule-breaking students, UNC has turned a difficult situation into a completely foreseeable debacle over the past two weeks.

The university announced a move to complete remote instruction for undergraduates Monday after the announcement of the fourth campus COVID-19 cluster  Sunday and 130 confirmed students cases during the first week of class. In a televised interview, UNC Chancellor Kevin Guskiewicz blamed off-campus activities for the failed reopening plan.

“I can only speak to what is happening here,” Guskiewicz said. “We have been transparent about everything regarding this map for 2020.”

No, the UNC administration hasn’t, said some students and faculty.

UNC senior and student activist Shareen El Naga attended the first meeting of the Public Health Student Advisory Group. The group convened university representatives, faculty and researchers in the health education field, along with students, for perspectives on mask-wearing indoors and outdoors, social distancing, addressing gatherings/parties, self-isolation and contact-tracing compliance, according to an email obtained by The Local Reporter.

El Naga said she became disheartened when the university representatives spent most of the time on signage aesthetics, including colors, and social media promotion. According to El Naga, when she urged the university to increase signage on south campus, where most first-years live, administrators never followed through with her suggestion.

“This has been not just a summer-long or semester-long thing,” El Naga said. “This for me has been a career-long thing at UNC.

“And I think for many other leaders, activists, just students in general, athletes, anybody, especially marginalized folks here: it is just a tumultuous journey for a lot of us, and that’s really unfortunate because it’s draining.”

El Naga added that the task force failed to discuss the implications of the return of Greek life to the community and the risks of fraternities and sororities hosting off-campus gatherings. In fact, several of the COVID outbreaks reported so far have occurred at fraternity houses.

In a letter to the Fraternity and Sorority Housing Corporation Partners and Advisors, UNC Interim Vice Chancellor of Student Affairs Johnathan Saul wrote, “Non-compliant social gatherings (i.e., parties) may result in legal and/or University consequences, including the potential of loss of recognition. In addition, chapter violations will also be referred to their respective council’s judicial process.”

The Chapel Hill Police Department cited the Zeta Psi fraternity for a loud party/mass gathering violation Aug. 8, but the police didn’t file charges, and the university has yet to announce any disciplinarily actions.

The university also didn’t enforce rules on its own grounds.

A number of images showed students gathered en masse, without masks, on a slip-and-slide outside of Hinton James residence hall as well as using the volleyball court.

A mother of one UNC student who lived in a dorm said if she saw her daughter in one of those videos, that would’ve been her last day on-campus.

“There are not enough parents who would do that,” said the mother, who agreed to speak with The Local Reporter anonymously.

“If you’re caught violating, if you’re caught doing this, these are your consequences, and that was not,” she said. “[UNC] didn’t put their money where their mouth was on that, and the kids called bluffs as kids will do.”

I was supposed to attend an in-person class Monday, but my professor canceled after four students across three classes informed him of possible exposure to COVID-19. I thank those students for doing something the university administrators and Board of Governors have yet to learn: owning up to one’s mistake and be transparent moving forward.

I could’ve easily been the 280th-plus student COVID case. The situation would have been a lot worse if professors didn’t take the initiative to hold online classes. “The first thing [UNC] should do, and they should have done last week, is be transparent in what their plans are,” said John Robinson, of the Hussman School of Journalism, who transitioned to remote learning after the first day of classes and wrote an apology to his students.

“And unless they do something like that, look, the academic scandal, Silent Sam, and now this, there’s been a lack of transparency across the board for each one of those. And there’s been no sign they’ve learned a whole lot from them each time.”

El Naga believes that UNC and the university system rely on short-term memory that disappears after a graduating class leaves campus.

“Folks are starting to get really tired,” El Naga said. “This particular situation has really exposed a lot of the mal-intent and greed behind some of the administrators and overseers.”

Be the first to comment on "UNC Panned for Reopening Debacle"