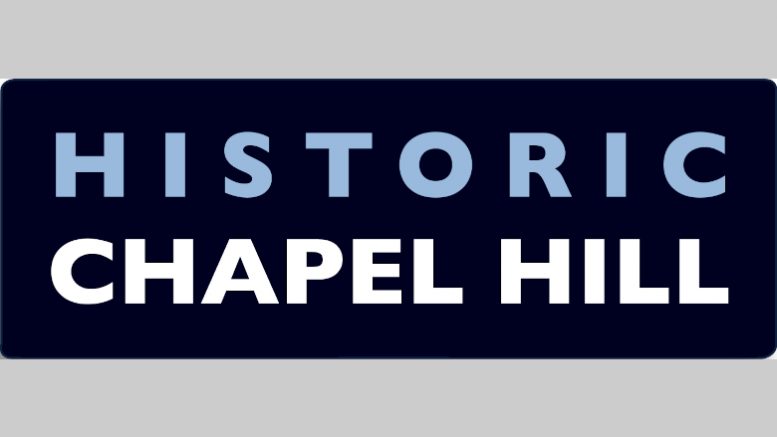 As new townhomes and modern apartment complexes spring up around Chapel Hill, professor John Sweet is taking a look into the town’s past.

Sweet, who teaches history at the University of North Carolina at Chapel Hill, recently launched a website mapping homes and other properties in the three local historic districts downtown. With just the click of a button, visitors to Historic Chapel Hill can read about the details of 19th- and 20th-century homes they pass on their way to work.

What is Historic Chapel Hill?

Historic Chapel Hill is filled with fascinating tidbits about familiar sights. That odd-looking stucco building at 401 E. Franklin Street? That was Chapel Hill’s first law office, erected in 1843 by Samuel Field Phillips and also used by William Horn Battle for the university’s first law school classes. Wondering about the stone castle at 746 Gimghoul Road? It was built in the 1920s for the secret fraternity the Order of the Gimghouls.

Chapel Hill has a “very diverse architectural tradition,” Sweet said. In addition to Georgian houses, there are Victorian homes, bungalows and other unique forms of architecture.

To build the Historic Chapel Hill website, Sweet compiled local reports and surveys from the National Register of Historic Places, which describe the origins and architectural details of the property. He also searched out old photos of houses which had never been digitized, putting everything together in an easily searchable database.

“It’s often really revealing to see a 1992 picture next to a 2015 picture,” Sweet said. “The goal was to make available and accessible information that people mostly weren’t aware existed.”

The project started as a way to help the Chapel Hill Historic District Commission, a government agency tasked with maintaining maps and records of the significance of structures within historic districts, Sweet said. Sweet hopes people who use the website today will gain a deeper understanding of the town they live in.

“I want people to get a sense of the diversity of the town’s past and get a sense of the region’s history,” he said. “I think there’s an ineffable sense of place that you get from having structures and neighborhoods that have developed organically over time. They give a sense of texture and richness to the past.” Historic Chapel Hill wasn’t the first such project Sweet worked on. Earlier this year, Sweet launched the Chapel Hill 1930 Project, a detailed map based on the 1930 Federal census that shows the town’s history of segregation. That particular website originated from a first-year seminar Sweet was teaching called “Seeing History in Everyday Places,” he said.

“One of the challenges we had was that there wasn’t consistent documentation for areas around town,” Sweet said, noting that the three local historic districts surrounding the University campus are documented through architectural resource surveys conducted by the town and the State Historic Preservation Office under the auspices of the National Register of Historic Places. “The historically Black parts of town, which are to the north and west of the University, have not been documented in the same way.

“The historic preservation movement had strong elements in it that were kind of elitist and, to some extent, racist. The effect was to produce a kind of racially-coded documentation of local architecture.”

Rather than simply studying existing records, Sweet and his students decided to study areas of Chapel Hill that weren’t well-documented. By using data from the 1930 U.S. Census, they created a picture of where people were living 90 years ago. The results reveal a harsh divide between Black and white people.

“In mapping it out, the first thing that’s obvious to students is, they’re like ‘Oh my god, there’s a really stark color line,” Sweet said. “You can literally draw a line.”

Other patterns became apparent as well. For example, most of the Black Americans who lived in Chapel Hill at the time were born in this area, while others migrated from states further South, Sweet said. At the time, Chapel Hill was a good place to come if you were a white academic, but Black Americans seeking opportunity weren’t moving down from Northern states.

Sweet and his students also looked at property values, school districts, employment and education records. The more work they did, the more it became clear that historic inequality has left a lasting mark on Chapel Hill.

The future of history

Sweet hopes to continue mapping Chapel Hill, he said. Although his specialty is in 18th-century American history, he’s always been interested in the history of place.

While the Historic Chapel Hill website currently includes data from four major neighborhoods in town, other areas remain unsurveyed, Sweet said. The professor hopes to eventually launch a second phase of the project, where he and his students do a rigorous architectural survey of historically Black areas of town.

“So we can kind of fill in Historic Chapel Hill,” Sweet said. “There are remarkable older structures and structures with their own histories in all parts of town.”

‘I cannot express how scared I am for my son.’