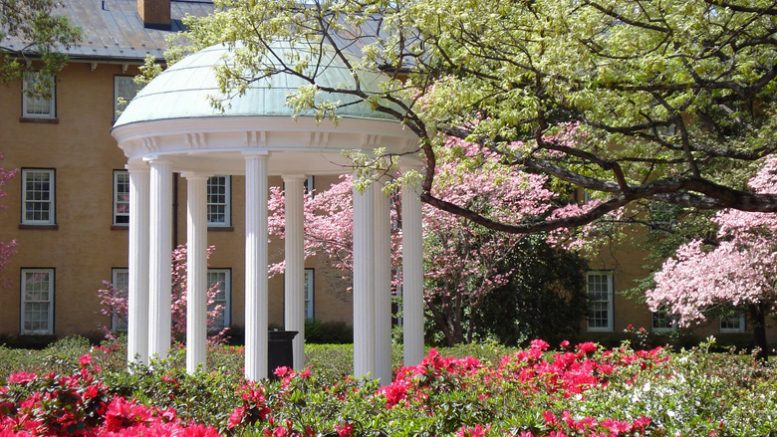 UNC Chapel Hill Chancellor Kevin Guskiewicz says the university intends to reveal its plans for the fall semester by the end of May.

“We expect to announce our top-line plan for the academic calendar by the end of the month,” Guskiewicz said in an email statement from UNC Media Relations.

To develop its plan of action for the fall while the coronavirus pandemic still rages, the chancellor said the university is taking all the following into consideration:

When the university releases more information about the fall semester, Guskiewicz said in the statement, it will launch a website to provide a road map for students, parents, faculty and staff.

While UNC has yet to publicly announce how it will handle fall classes, colleges across the nation have begun to make known their plans for the semester, with some opting to offer only online classes and others choosing a return to in-person instruction. California State University, for example, the nation’s largest four-year public university system, has announced it is cancelling all fall classes at its 23 campuses, with instruction taking place almost exclusively online.

“Students and faculty alike are eager to find out” what Carolina will do, said Andy Bechtel, an associate professor of journalism at UNC.

Bechtel said Guskiewicz has met virtually with various university departments to discuss the upcoming semester, and ways to safely hold in-person classes. The professor said he has heard there is a chance smaller classes, with 50 or fewer students, will be held in person while larger classes will be online, though he said even in-person fall classes will likely feel quite different than what many students and professors may be accustomed to.

Bechtel said he has also heard that some entrances to on-campus buildings may only allow students to pass through one way at a time, similar to the way many grocery stores have required customers to only walk down aisles in one direction.

The chancellor also has mentioned possibly starting the fall semester two weeks early, Bechtel said, and not having a fall break in order to dodge the possibility of facing a second wave of the virus.

Brent Mckee, a professor of marine sciences, said he has heard administrators consider greatly increasing the number of people cleaning the campus and the frequency of their efforts in order to ensure COVID-19 doesn’t spread via classrooms.

Mckee also said he has heard the university might divide classes into two halves, with one half attending in person while the other attends online, and have the two halves alternating. Mckee said this measure would help minimize the number of students from the same class together in the same room.

Bland Simpson, a professor of English and creative writing, said he is unsure how to best teach some of his classes in the future, such as his songwriting class, which features a theatrical performance as a final project. Simpson said certain safety measures, such as wearing a mask, may greatly detract from a performer’s ability to connect with an audience.

While many artists and performers have likely been frustrated by the pandemic, Simpson also said he thinks public health should be the university’s main concern when planning for rhe fall semester. “The main dream would be that we don’t engender disease, but of course that’s everyone’s dream,” Simpson said.

Many UNC students are also anxious about the upcoming fall semester.

Nhi Nguyen, a rising senior studying library and information science and statistics, said she currently has only a few credit hours left and was planning to use the space in her schedule to study abroad in Seoul, South Korea, during the fall semester.

But because of the pandemic, Nguyen said she has decided not to study abroad and to graduate early instead. Although she said she was disappointed at first, Nguyen said she is trying to stay positive.

“If I can go then I can go, and if I can’t it’s not like I won’t ever be able to travel again,” Nguyen said.

Matthew Alexander is another rising senior studying media and journalism and history. He said he will miss being able to participate in extracurricular activities this fall, and is concerned about the virus spreading on campus, especially because he plans to live in an on-campus dormitory and doesn’t want to put family members he often sees at risk.

“That’s a lot of people in one space,” Alexander said. “Will I be unable to go visit my grandma, who I live with, or see my parents?”

Despite the concerns and questions about how to handle the fall semester during the pandemic, Teresa Artis, a member of UNC Chapel Hill’s Board of Trustees, said she is confident the administration will make the right choices.

“We’re very fortunate that we have a highly ranked public health school and experts who can provide guidance,” Artis said.